After 15 years of service to the Seattle Sounders, Zach Scott had to put up with his dreaded pursuer — the spotlight — in a testimonial match played in his honor at Memorial Stadium Wednesday night. 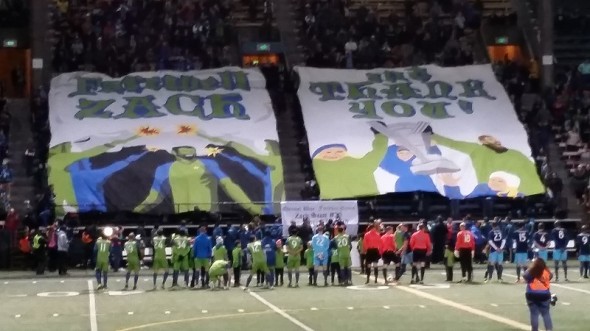 Seattle Sounders legend Zach Scott pulled on the jersey one final time Wednesday night for a testimonial match in his honor at Memorial Stadium. Scott spent his 15-year professional career as a Sounder in the A-League, USL and MLS, winning four U.S. Open Cups, a Supporters’ Shield, and three national titles.

Testimonial matches were first played at a time when players didn’t receive enough compensation to have a retirement fund. The ticket money collected for testimonials was given to retiring players to help them after they no longer drew income from the game.

While keeping money from tickets would be a boost for Scott, who never earned more than the MLS minimum salary, he insisted proceeds from the event be shared three ways: The RAVE Foundation (the charity of the Sounders), the Pediatric Brain Tumor Research Fund, and a college fund for his children.

Brad Evans and Osvaldo Alonso, Scott’s only remaining teammates from the 2009 inaugural MLS season, acted as coaches for the blue and green teams, comprised of Scott’s friends and former teammates.

“It was a really fun night,” Evans said. “It’s rare that these kinds of nights happen. I hope that this spreads like wildfire, because these nights should happen for all club legends, regardless if they played for a rival or played on the other side of the country.

It’s a testament to the hard work that Zach put in, but it’s also this club treating their players as they should be treated.”

The Sounders and the Emerald City Supporters, one of the largest organizations of Sounders fans, collaborated to put on the match. Before the game, fans set off smoke bombs and hoisted a banner that read, “Farewell Zach and thank you” along with a depiction of Scott lifting the MLS Cup.

The action was light-hearted and friendly, boasting a colorful cast of previous Sounders. Casey Keller spent a half in net, at one point doing an interview with Sounders play-by-play voice Matt Johnson while the ball was still in play. Nate Jaqua scored a hat trick in the first half, while Steve Zakuani showed that he still has the speed and touch that delighted crowds at the Clink when he sprinted onto a bouncing ball and chipped it over the keeper to score.

The largest cheers were for Scott. True to his no-nonsense persona, Scott spent the entire 90 minutes at center back, refusing calls from the crowd to play forward. When he touched the ball, the crowd roared. When he made hard-nosed tackles, they grew louder.

Scott shied away from the spotlight when the match was over.

“I don’t seek it out, and I never have in my career. But I’ll take it if it’s good for the community and it raises funds for cancer research,” Scott said. “It was the best case out of a very uncomfortable situation. Everybody out here celebrating my career won’t ever feel right. But in that same vein, it was very cool to have everyone out here and realize that we were doing something bigger than that, giving back to the community that I’ve made home the past 15 years.”

Seattle Center’s Memorial Stadium was a fitting site. It was the place where Scott first showed up as a hopeful Gonzaga graduate for an open tryout in 2002, looking to keep playing the game he loved.

A decade and a half later, he was still playing, defying odds of every off-season roster revamp. The fans latched on to his tenacity and perseverance, dubbing him “Mr. Sounder.”

After being a part of all three major MLS trophies, Mr. Sounder brought it full circle. His 11-year-old son, Kalei, subbed on to the pitch for both Scott’s green team and the blue team, scoring a goal for each side against playful defending.

“He’s a great kid,” Scott said. “The biggest joy in my life is being here with my family and getting to experience that.”

In the final minute with his greens up 7-5, Scott was substituted off for a standing ovation, jogging off the field to shake fans’ hands and express gratitude.

“I’m very grateful for ECS and the Sounders for doing it,” Scott said. “I haven’t seen some of these guys for close to 10 years. It was great to connect with them. Those were massive points of my life, playing soccer here, and getting celebrated one more time with them was very fun.”