In Indianapolis Wednesday. the Seahawks coach said he believes Earl Thomas and Tyler Lockett, both of whom lost to leg injuries in 2016, will be ready for the start of the season. 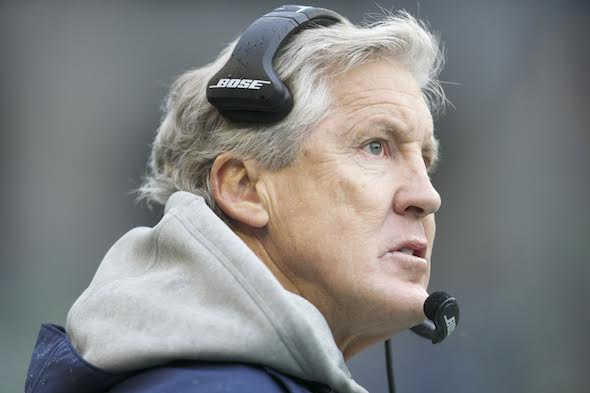 Speaking to reporters at the NFL scouting combine in Indianapolis Thursday, Seahawks coach Pete Carroll said the team will be “very aggressive” in its pursuit of offensive linemen when annual free-agent signing period gets underway March 9. He also said he will take a “long look” at O-linemen in the draft, especially those that come from colleges that utilize the three-point stance.

Carroll added that George Fant, a rookie last year, is “our left tackle,” and that the club would make a qualifying offer to RT Garry Gilliam,  a restricted free agent.

“We know our young guys are going to get better and hopefully make a big leap forward,” said Carroll. “That’s what usually happens from the first year to the second year.”

FS Earl Thomas and WR Tyler Lockett, both of whom had season-ending injuries, are on track to return for the start of the regular season.

“I don’t think there’s any reason not to say that for those two guys,’’ he said. “Both have a really good chance to be there as we kick off the season.’’

After he broke his tibia Dec. 4 against Carolina, Thomas tweeted that he was considering retirement. A few weeks later, he said he would return.

“It was a big shock to him,’’ Carroll said. “He had never been injured like that before. He is feeling very competitive about it. His mentality is strong and he’s looking forward to getting right.”

Carroll wouldn’t rule out CB DeShawn Shead returning for the start of the season, either. Shead tore his ACL in the playoff loss to Atlanta.

“I’m optimistic,’’ he said. “DeShawn is such an extraordinary healer and competitor, I wouldn’t put any limits on him right now. But it wouldn’t be unlikely that he might go into the season before he’s ready to go.’’

The Seahawks will try to re-sign TE Luke Willson, who will become an unrestricted free agent.

Regarding coaching staff changes, Lofa Tatupu, who was an assistant coaching linebackers for two years, left the team to pursue opportunities outside of coaching. He will be replaced by John Glenn, defensive quality control coach for the past three years. Also, Clint Hurtt was added as a defensive line coach and Chad Morton will become running backs coach, taking over for Sherman Smith.