On a good day, the Sounders boast one of the most fearsome lineups in MLS. But at the start of the season Saturday, nagging injuries, newbies and a short turnaround from last season may take an early toll. 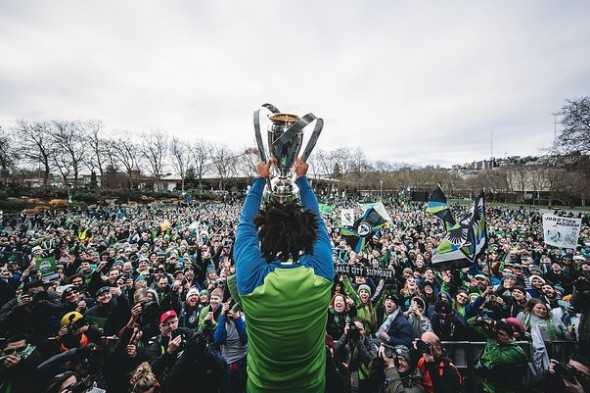 Thousands at Seattle Center saw Roman Torres lift the MLS Cup  in 2016. Do the Sounders have the depth to create a similar scene in 2017? / Dan Poss, Seattle Sounders FC

As they begin their first title defense on the road against the Houston Dynamo Saturday (5:30 p.m., Q13 Fox), the Sounders’ hope is that their off-season acquisitions can fill in behind the starters to replicate last season’s success — from the beginning. The Sounders in 2016 had their worst-ever start before rebounding behind the mid-season signing of Nicolas Lodeiro to win the MLS Cup.

The turnaround for MLS champions is quick. Seven weeks after spraying champagne in the visitors’ locker room at BMO Field in Toronto, the Sounders reported back to Starfire to make new plans.

The physical toll, especially for four Sounders who were called in to USMNT’s January camp one month after the playoffs ended, has been large. Stefan Frei came home early from national team duty after spraining an ankle that is not fully recovered. Jordan Morris also developed an ankle issue in preseason. Brad Evans will miss five to seven weeks with a calf injury.

The oldest player called to national camp, 32-year-old center back Chad Marshall, is the only one considered healthy ahead of the season opener.

The short off-season wouldn’t be so troubling if they still had dependable depth. But roster coonstraints forced the Sounders to off-load several veterans that were due for a major pay raise.

The Sounders have tried to replace depth as best as they can, acquiring Will Bruin from Houston and Harry Shipp from Montreal, two proven contributors who can ably fill in and compete for starting spots at forward and midfield, respectively.

The main source of goals will still come from Seattle’s core trio. Morris, Lodeiro and Clint Dempsey, who the club confirmed Tuesday was fully cleared to take part — or even start — will be called upon to create the lion’s share of chances.

Lodeiro seemed indestructible last year, even after joining Seattle at the conclusion of Boca Juniors’ season. He never seemed to tire in the six months he tacked on to his previous season. Dempsey, however, has not played a competitive match in six months and may need time to return to form.

“We’ve brought some guys back slowly, in mind of the short turnaround,” Lagerwey said. ”We start with five of seven games on the road. That would be difficult for any team in any circumstance. But we are taking a long-term view of the team that we field here at the start of the season, as we work guys back to fitness and try to get guys on the field where they can stay on the field.

The message to fans: Don’t panic if the team doesn’t get results right away. Lagerwey is more concerned with getting players to the right spot, and avoid rushing to acquire expensive veterans to throw into lineup gaps.

“I don’t think we’re under pressure to fill up the roster right away,” Lagerwey said. “We could go in with fewer than 25 guys signed on opening day. That’s OK. We have options that we will continue to explore. We want to give young players an opportunity to prove themselves, because we believe that that is the long-term future of the organization. We don’t want to act against our own plan and say, ‘We’ve got to sign somebody this week because we don’t have a veteran player in this position.’”

Lagerwey backed up his claims of rewarding young players when he signed central midfielders Zach Mathers and Jordy Delem to first-team contracts. The pair, which played for S2 last season, trained with the first team throughout the preseason and will be counted on to plug holes as the year progresses.

Questions remain around the defending champions. With Evans out and backup Oniel Fisher in concussion protocol, the Sounders pushed defensive midfielder Gustav Svensson into the right back slot, where he is likely to start. Svensson said he was capable of playing the position, but that it would feel unnatural for the Swede, who is used to playing in the middle of the field and lacks the speed of a true outside back to cover the flanks.

None of the issues spell doom. When Lodeiro joined last summer, the club was in ninth place in the Western Conference. A slow spell while players find their rhythm won’t derail the Sounders’ hopes to become the first team to repeat as MLS Cup champions since the Los Angeles Galaxy in 2010-11.

Still, early losses — Seattle has never won in Houston — may cause some to fret and recall the dismal start to 2016.

If the Sounders get healthier and stay that way, they will routinely field a lineup many in the league will envy. But a few key injuries have the potential to quickly invert the club’s fortunes, compounded by call-ups for international duty.

One needs only to look at 2015 MLS Cup champions Portland and runners-up Columbus, neither of which qualified for the playoffs last fall, to see how quickly top teams can slide if they fail to recall what brought them to the top.