The Seahawks may want back Russell Okung, but he will find himself with multiple suitors in the NFL’s free-agent marketplace. When they can’t afford him, the secondary becomes the first priority. 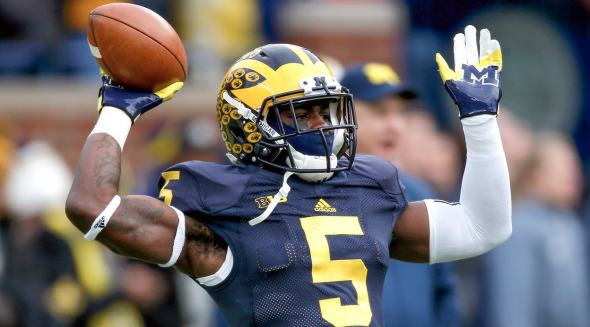 Jabrill Peppers now sees himself as an NFL safety, and the Michigan blue isn’t that different from Seahawks blue, so . . . / Sportingnews.com

The combine ends Monday, Seahawks godfathers Pete Carroll and John Schneider already have spoken, and negotiations begin Tuesday ahead of the commencement of free agency Thursday. The Seahawks’ immediate future is taking shape.

Why these moves? Because they have few other options to make them better right away.

And the Seahawks are always in right-away mode, unlike the San Francisco 49ers, who gave out six-year contracts to new coach Kyle Shanahan and new GM John Lynch, suggesting that after a 2-14 season, they have plenty of runway to lollygag, dawdle and procrastinate. Even dither.

Looking at Seattle’s O-line, closing in on Washington Huskies hoops coach Lorenzo Romar as Seattle sports’ longest-running conundrum, Carroll spoke out of both sides of his mouth last week during his podium turn at the Indianapolis combine.

On the one hand, he said the Seahawks “have a chance to do things very aggressively and very actively” in free-agent market. On the other hand, he committed to George Fant at left tackle, and Schneider indicated they are likely to re-sign right tackle and restricted free agent Garry Gilliam. For the line’s two weakest positions, that about wraps it up.

Carroll explained the double-talk this way:

“One thing we do know is that our young guys are going to get better,” he said. “They’re going to make hopefully a significant first-year to second-year jump like most players do, and that will really help us.

What seems to be happening is that Carroll would like a vet such as Okung on a one-year deal to push Fant, who can still be the Seahawks’ left tackle, just not right away again.

The problem with that scenario are two functions of the marketplace: Okung, 29, is one of two decent tackles in free agency, along with Cincinnati’s Andrew Whitworth, who’s much better, even at 35. The Washington Post reported the New York Giants, New York Jets, Los Angeles Chargers and Minnesota Vikings all have interest in Okung.

The other thing is that the draft is especially weak in O-linemen.

So Okung, derided last season for acting as his own agent and getting a modest deal from Denver ($5 million base and another $3 million in incentives that he made) to leave Seattle, will be in position to cash in on a marketplace desperate for his talents after the Broncos declined to pick up the $48 million option on his contract.

Meanwhile, the Seahawks will be left to rummage in the J’Marcus Webb Memorial Remainders Bin for veteran talent to push the kids. Carroll likely will have the same five starters that finished the season ranked 32nd by Pro Football Focus.

Would Okung take a hometown discount from the team that drafted him in the first round and paid him $48 million over six years? Oh, hell no.

Absent good options in free agency and the draft for the line, the Seahawks need to put their 26th pick overall on someone who can succeed SS Kam Chancellor or FS Earl Thomas. They could go for a cornerback in a draft rich with them, but Peppers was such  a versatile athlete at Michigan as a linebacker/safety/returner that he would be a great fit in Seattle, even if they have to climb up to get him.

At the combine, Peppers surprised some by measuring 5-foot-11 and 213 pounds, making him too small for linebacker in the NFL. But Saturday, he told reporters he was all about safety. To prove it, he was to work with the defensive backs in Monday’s final workouts.

”I don’t have a lot of tape at safety,” Peppers said. ”But I’m a pretty damn good safety.”

He’s not built like Chancellor — who is? — but he is a replica of Kansas City’s Pro Bowl SS Eric Berry. NFL.com reported the Peppers’ combine numbers were very similar to what Berry produced in 2010.

It’s true that Peppers had little pass coverage experience at Michigan as a linebacker, but that’s something that can be learned, particularly since he can be a backup for a year or two in Seattle.

The Seahawks finished the season 4-4 with a Thomas-less defense that was whipped soundly by Green Bay and Atlanta. You may have thought the O-line was a football crisis, but giving up 38 and and 36 points to the Packers and Falcons was, in Carroll World, a crisis.