The defending MLS champs got off to a poor start in the season opener against the fire- up Dynamo in Houston. Clint Dempsey, playing the full game, scored in the 58th minute, but Seattle fell 2-1. 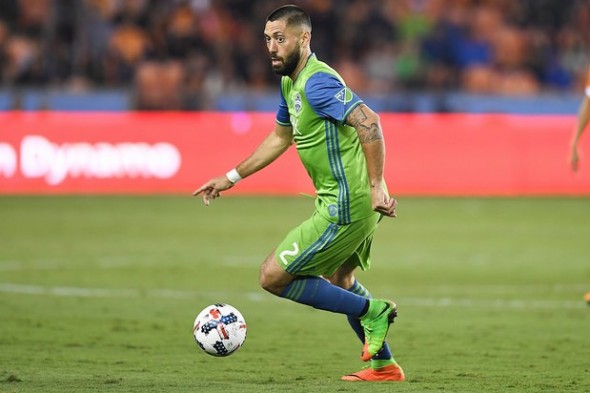 Clint Dempsey scored in his first game back from a heart problem, but Seattle dropped its season opener in Houston 2-1. / Trask Smith, Seattle Sounders FC

A second-half goal from Clint Dempsey was not enough as the Seattle Sounders lost their season opener on the road Saturday to the Houston Dynamo, 2-1. The Sounders won the possession battle, holding the ball for 64.1 percent of the match, but could not finish in the attacking end.

Coach Brian Schmetzer was disappointed in the Sounders’ readiness.

“We learned a valuable lesson tonight,” Schmetzer said. “The first half, Houston came out and they were fired up to play. Home match, playing against the champs, and they got two goals. Second half was a different story. Scored one goal, just couldn’t find a second one.

“That is what we learned tonight — if we’re not sharp from the minute the referee blows the whistle, those performances are what’s going to happen.”

The match marked the first time the Sounders opened their season on the road since joining MLS in 2009. They have yet to beat the Dynamo in Houston.

Clint Dempsey made his first start since a heart problem stopped his previous season in  August. He played the full 90 minutes, and looked to be close to his old self as he slotted dangerous passes into the wings, scoring in the 58th minute off a cross from the left side from Joevin Jones.

Houston opened the scoring with a free kick goal from Erick Torres in the 20th minute that curled over a seven-man wall from the Sounders into the right side of the net. In the 42nd minute after a Sounders turnover, GK Stefan Frei helplessly sprawled to his left and failed to reach a curled effort from Romell Quioto.

In the second half, Seattle applied pressure, breaking down Houston’s defense. Despite the increased aggression, Seattle could not level the score despite several close calls. Nicolas Lodeiro smashed a one-touch shot off the side of the net in the 72nd minute, narrowly missing the top right corner off a cross from Jones.

Seattle had a chance to equalize in the closing seconds, but center back Roman Torres had a good cross but sent the effort high over the crossbar.

Schmetzer had not intended to play Dempsey the whole game.

“We probably ran him out a little bit more than I wanted to,” Schmetzer said. “It was a good goal. That’s my decision, something Clint and I discussed. We just needed someone to get one more.”

No one produced, however, leaving the Sounders empty in the first game as defending champions.

The Sounders next go on the road again against the Montreal Impact March 11 (4 p.m., JoeTV).