The hoops scene in the state has been largely bleak. Yet Lorenzo Romar seems to have earned another season, thanks to money, a good recruiting class — and an imminent Title IX scandal. 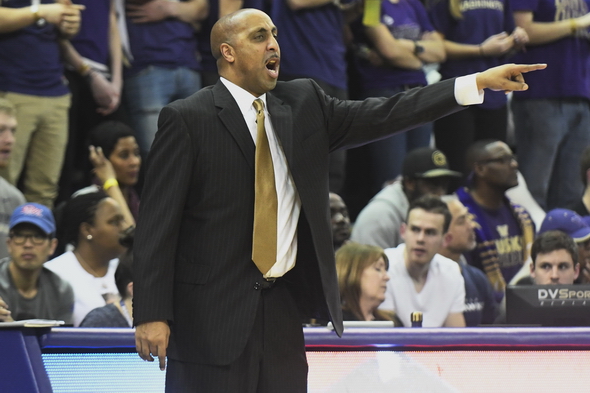 Lorenzo Romar seems to have secured himself another season. / Alan Chitlik, Sportspress Northwest

What an awkward thing basketball has become in Seattle.

The NBA’s absence is almost certain to last longer than a decade. Yet the city and state continue to populate its ranks with premier talents, from 18-year veteran Jason Terry of Franklin High and the Milwaukee Bucks to 19-year-old ex-Huskies star Marquese Chriss, a starting power forward for the Phoenix Suns. Tacoma’s Isaiah Thomas of the Boston Celtics is an MVP candidate.

The city’s two Division I men’s college programs, the University of Washington and Seattle University, had dreadful seasons that mercifully will end this week in one-and-done appearances in their respective conference tournaments.

The hoops highlight on the west side of the state has been the UW women’s program and its spectacular tandem of the nation’s leading scorer, Kelsey Plum, and nation’s leading rebounder, Chantel Osahor.

The Huskies reached the Final Four last year and are capable again — except that the 70-69 loss Saturday in the opening round of the Pac-12 Conference tournament to Oregon at KeyArena exposed how vulnerable the team is to an aggressive double-team of Plum.  Every potential opponent in the NCAA tournament now has a copy of the blueprint for how to stop this two-player team.

On the east side, Washington State had its eighth consecutive year of the post-Tony Bennett doldrums, but at least was good enough to beat Washington twice. Then there’s Gonzaga, which looked to have its best team ever until it looked surpassingly and surprisingly ordinary in losing its only game of the regular season in the last one, to 10-loss BYU.

The defeat has powered up all the local and national skeptics who say Mark Few and the fourth-ranked Zags will always find a way to keep themselves out of the Final Four.

That leaves WNBA rookie of the year Breanna Stewart to attempt to lead the Storm to its first winning season in six years.

It’s the fourth quarter in area hoops, and bleakness leads joy by a big margin, with fouls to give.

During a recent talk with the 101 Club at the Washington Athletic Club, I was asked for my opinion where, in five years, we would be watching NBA hoops.

“Portland,” I said. Then I amended the choice to, “Nathan Hale High School,” because it was already a pro team without the exorbitant pay.

Even the spectacular run by undefeated Hale that climaxed Saturday in the state 3A championship triumph over Garfield came with a moon-sized asterisk: Purchased by the University of Washington.

Hale was 3-18 a year ago. But an influx of seven transfers led by the astonishing Michael Porter Jr., son of the new UW assistant coach, and godson of Romar, transformed a perennial underdog into what some claim is the best high school team in the country. The coach? Brandon Roy, the former Huskies and Trail Blazers star in his first season as a head coach at any level.

Spectacular as it was, and apparently done within the inadequate rules of the WIAA, Hale’s abrupt dominance produced for many a nose-scrunching wince over the transformation orchestrated by Romar and Porter Sr., who has two other talented sons likely destined for Montlake.

It reminded me of the old Soviet teams in basketball and hockey back when the Olympics endorsed the sham of amateurism, which kept the U.S. using collegiate players against gnarly 33-year-old Russian men with three kids and two lit cigarettes.

But the transfer maneuvers helped save Romar’s job, at least according to Yahoo! sports columnist Pat Forde, who Monday wrote that anonymous sources reported Romar’s job was safe, despite a 9-21 season and the avoidance of the NCAA tournament for a sixth consecutive time.

The UW told the Seattle Times that the coaching staff is still being evaluated. But it has been understood all season that Porter Jr. and four other recruits make up perhaps the nation’s best incoming class, one that could melt away if Romar were fired. Then there’s the $3.2 million owed Romar on his contract if he were terminated now, which is toxic to a department operating with a significant annual deficit.

On top of those factors, some industrial-grade weirdness struck the UW shop Sunday.

The Seattle Times reported that, of all things, the women’s rowing team for years was inflating the number of its participants in order to meet the gender-equity requirements of Title IX that provides some federal funding to the school.

The story reported a huge discrepancy from 2010 to 2015 between the number of participants the UW sent to the Department of Education compliance office and the number of active athletes on the UW’s website. At least eight women interviewed expressed surprise that their names were included when they were not part of the program. The padding brought women’s overall participation numbers equivalent to men.

Athletics director Jen Cohen expressed surprise at the news, and athletics spokesperson Carter Henderson in an email claimed the university believed its numbers were accurate.

The reason that this impacts Romar is that, if the story is true, UW athletics is defrauding the government and subject to penalties. It’s a serious potential scandal that will require lots of attention from Cohen, her staff and upper campus, not to mention triggering examinations of other schools nationally that also may be inflating numbers in difficult times for athletics budgets.

So not only is UW unwilling to pay Romar big coin to not work, the department likely will have even less time to search for and find a quality replacement who can attempt to salvage the high-end recruiting class. The keep-or-fire decision regarding Romar, already complex, becomes an order of magnitude greater in light of a potential department violation of Title IX that damages the UW regarding gender equity.

Compared to an imminent conflagration erupting with the feds, the Romar situation is a mere brushfire. Good thing the school is next to a big lake.