The Seahawks, rarely active on the first day of free agency, jumped in and signed ex-Jacksonville OL Luke Joeckel, despite his disappointing career after winning the Outland Trophy at Texas A&M. 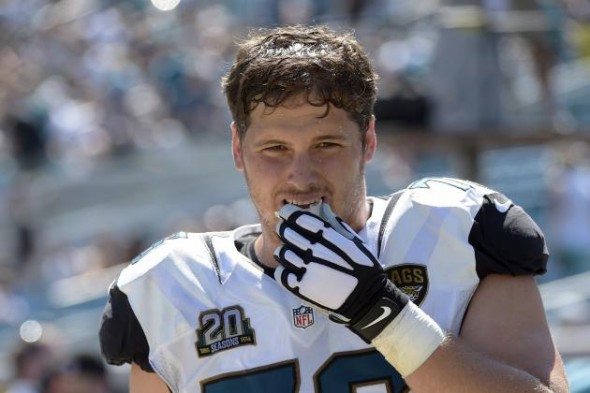 Luke Joeckel will join the Seahawks on a one-year deal worth a reported $8 million. / Jacksonville Jaguars

Less than an hour into the NFL’s free agency  period Thursday, the Seahawks made the first move to upgrade their 32nd-ranked offensive line by agreeing on a one-year deal with unrestricted free agent Luke Joeckel, 25, a four-year disappointment at tackle and guard for the Jacksonville Jaguars who is coming off knee surgery.

Reports say with incentives, Joeckel could earn up to $8 million. If that is the case, the Seahawks will invest almost as much in Joeckel in 2017 as they did their entire starting offensive line in 2016 ($8.2 million).

Joeckel won the 2012 Outland Trophy and was a unanimous All-America selection at Texas A&M before the Jaguars made him the No. 2 overall pick in the 2013 draft (behind OT Eric Fisher, selected by Kansas City). Joeckel signed a four-year contract that included a $13.8 million signing bonus, but played in only five games at right tackle as a rookie when an ankle injury wiped out the rest of his season.

Joeckel returned in 2014 but did not distinguish himself. Pro Football Focus rated him among the worst tackles in the league after he allowed eight sacks. After starting 14 games at left tackle in 2015, he moved to guard last year but was “overwhelmed,” according to PFF. He went on injured reserve in October following knee surgery.

Joeckel became an unrestricted free agent because the Jaguars declined to exercise their fifth-year option on his contract or negotiate a new deal.

At 6-foot-6 and 315 pounds, Joeckel is primarily a left tackle. But his time at guard improves his chances to back up or replace at two positions.

As expected, the Seahawks Thursday lost former kicker Stephen Hauschka, who agreed to a four-year, $12.4 million deal with the Buffalo Bills. Hauschka, replaced by ex-Minnesota kicker Blair Walsh, was the only unrestricted free agent from Seattle last year to sign with a new team Thursday. Hauschka’s departure prompted this tweet from Seattle punter Jon Ryan:

It’s been an honor to hold your balls for the last 6 years @StevenHauschka. Good luck in Buffalo unless you play us then I hope you suck.

The fact that the Seahawks will entertain visits from at least three running backs speaks to the durability questions about Thomas Rawls and C.J. Prosise.

The Seahawks won’t hold a reunion with LT Russell Okung, who departed in free agency a year ago to sign with the Denver Broncos. Okung, a top free-agent tackle on the market, agreed to a four-year deal with the Los Angeles Chargers for $53 million, including $26 million guaranteed. There was no way Seattle could have done that deal.

Ex-Seahawks LB Malcolm Smith, MVP of Super Bowl XLVIII, moved to NFC West rival San Francisco Thursday for a deal worth $26.5 million over five years. He played the past three seasons with the Oakland Raiders.