Nothing in the pro resume of Luke Joeckel suggests he is more than experienced insurance for the O-line. But another free agent, T.J. Lang of Green Bay, would be, if healthy, a difference-maker. 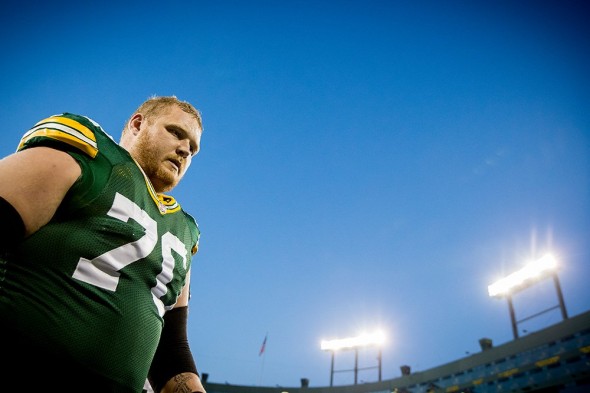 T.J. Lang, who’s been a solid guard for the Packers, is coming to Seattle for a free-agent visit. / Packers.com

If Tom Cable can rehab Luke Joeckel’s career, perhaps the city of Seattle can hire the Seahawks’ offensive line coach to work on downtown’s traffic gridlock. Miracle workers need to apply themselves to goals loftier than rushing for a first down on third-and-three.

How an Outland Trophy winner and No. 2 overall draft pick became a bust in Jacksonville is a little hard to say from Seattle. But the general manager who drafted Joeckel and the coach that installed him, ex-Seahawks aide Gus Bradley, are gone, and before they were ousted, tried to salvage Joeckel, 25, by moving him to guard.

The experiment lasted five games last season, when he hurt his knee, requiring repairs to his ACL, MCL and meniscus.

It is fair to say that Joeckel, signed Thursday to a low-risk, one-year contract with incentives that could reach $8 million, is nothing close to a savior. The fear for Seahawks fans is that he is something close to six-year veteran J’Marcus Webb.

He was the free agent signed a year ago to a $2 million deal who proved so insufficient that he couldn’t find a place on the NFL’s worst line and was cut after 12 games.

A year ago, Pro Football Focus did a re-draft of the first round of the 2013 draft, in which Joeckel was a touted All-America pick from Texas A&M, where he protected the blind side of QB Johnny Manziel in the Aggies’ wild passing attack.

In his first three seasons in Jacksonville, Joeckel “has graded negatively every year with his pass blocking,” the site wrote. “Joeckel has done nothing to suggest he will ever be a top left tackle.”

In that time, the Jaguars rushed for the second-fewest yards (2,893) and gave up more sacks (121) than anyone in the NFL.

Of course, that much badness requires a team effort. And Joeckel, with 39 career NFL starts, at least addresses a problem general manager John Schneider cited last week at the Indianapolis combine when he said the O-line “got too young,” with two rookies and a second-year man in three spots.

Then again, a used, four-year-old Smart car satisfies the experience requirement in about the same space as the 6-foot-6, 311-pound Joeckel.

So the first day of free agency did little to lighten the hearts of Seahawks fans hoping for someone larger and quicker than Ciara to protect QB Russell Wilson’s blind side.

Nevertheless, there was a bit of intrigue in the players reported to be visiting Seattle in the near future that suggests a better O-line play is in the works.

RG T.J. Lang, 29, a stalwart in Green Bay’s line who was drafted when Schneider was the Packers’ director of football operations, has scheduled visits here and Detroit, according to NFL.com.

Lang has continued where he left off a year ago with another fine season. Lang has matched teammate Josh Sitton, allowing just five total QB pressures in nine games, and has yet to allow either a sack or hit on Aaron Rodgers. His run blocking hasn’t been as good as it was a year ago, though, which is a trend with most of the Packers’ line, and part of the reason the team is so quick to abandon the run game.

Lang had hip surgery after the season and is also healing from a broken foot, so that may drive down his market value somewhat. But if he passes his physical exam, Lang, who has played tackle as well as guard, has the kind of talent and experience that would be a difference-maker in Seattle.

Without knowing the state of his health, it’s hard to say what the market is for Lang. But it certainly didn’t hurt him that LT Russell Okung, the free agent let go by Denver before Seattle, scored a four-year, $53 million deal Thursday from the Los Angeles Chargers ($13 million guaranteed), despite the ordinary season he had with the Broncos.

The size of Okung’s deal is what the Seahawks probably feared in this market: Inflation caused by teams with more salary cap room than Seattle. Especially for experienced O-linemen, an increasingly rare commodity because of the dumbed-down world of college football and its spread offenses, which have little need for linemen to assume a three-point stance for run-blocking.

That’s probably why the Seahawks invested so little in Joeckel. The free-agent powder must be kept dry and safe for hunting the essentials.