After an emotional departure from his boyhood club in Chicago, Harry Shipp had a down year in Montreal. Saturday he returns with the Sounders to Montreal to help begin a new MLS chapter. 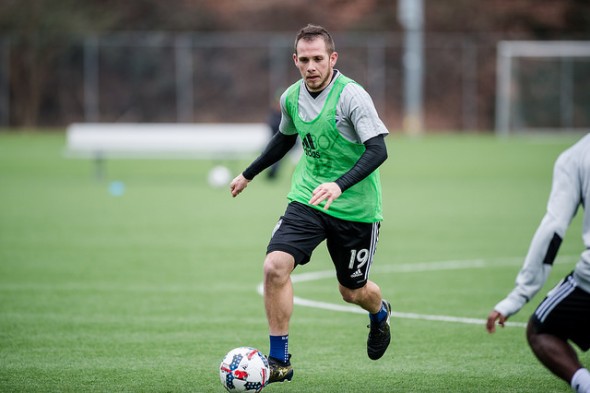 If you had told Harry Shipp two years ago that the Seattle Sounders would be the third club in his four-year career, he wouldn’t have believed you. The 25-year-old midfielder and former contender for MLS Rookie of the Year has arrived, though, and is preparing to visit his stopover club when the Sounders face the Montreal Impact Saturday (4 p.m., JoeTV).

Then, after a 20-loss season in 2015, the Fire blew up its roster, off-loading 14 players—including trading outside back Joevin Jones to the Sounders—and sending Shipp to Montreal in exchange for allocation money on Feb. 13, 2016.

In a letter written to Fire supporters hours after he learned of the trade, Shipp expressed his sorrow at leaving his hometown.

“When I was told out of the blue that I would no longer be a member of the Fire, I immediately broke down and started crying,” Shipp wrote. “It was totally shocking and overwhelming. This club and this city have meant everything to me. Not just for the past 2 years, but since I started following the Fire over 15 years ago.”

Shipp headed to Montreal, where his careful, mental approach to the game did not mesh well with manager Mauro Biello’s counter-attack-based approach. Shipp made 27 appearances for Montreal in 2016, scoring twice and assisting on three goals.

“I’m not super athletic, but I think I can read the game well,” Shipp said in January. “If I can know what those other guys are going to be doing and anticipate, I understand where to play the ball, where to pass the ball. I think this team, soccer-wise, suits me a lot better than it did last year.”

Though Montreal was a dismal year for Shipp, the lessons learned would help.

“I didn’t want to stay in Montreal for my whole life,” Shipp said. “But having that year away from home was the best thing for my personal development. I feel so much different now as a person and a player.”

Now, Shipp has a chance to return to the site of that growth — at least one of the two sites. The game is at Olympic Stadium, where the team plays until spring thaws out Stade Saputo.

It is unclear if Shipp will play. The midfielder hurt his ankle in a preseason game against Portland and has been unable to play since, though he has made progress.

If he cannot play, he can still help the Sounders. Coach Brian Schmetzer said Tuesday that Shipp had, on his own initiative, reviewed film of Montreal’s tactics from the playoffs last year and talked to Schmetzer about them.

“He re-watched the game they played against Toronto and is going to give me a little cheat sheet of some of the things that they discussed tactically for that game,” Schmetzer said Tuesday. “He’s already ahead of the game. I want him to be a player first. I love the fact that he’s helping out. He’s a smart kid.”

As Shipp draws closer to starting a new chapter of his career, he hopes the discomfort in Montreal and the pain of his Chicago departure can push him to success.