Despite looking outmatched for much of Saturday, the Sounders twice scored late to manage a point on the road against the Montreal Impact. 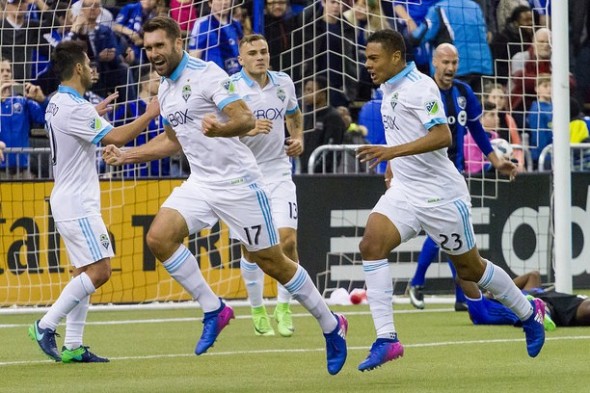 Despite giving up two first-half goals, the Seattle Sounders put their substitutes to good use Saturday at Olympic Stadium in Montreal, securing an equalizer in the final minute of stoppage time in a 2-2 draw against the Impact. Will Bruin, who subbed on in the 85th minute, punched in the tying goal with seconds to play.

The score came in the third minute of stoppage time, when Cristian Roldan swung in a cross from the right side. The ball was headed down by Jordan Morris and fell directly to the feet of Bruin, who converted into an open net.

When Bruin came in for center back Roman Torres, instructions from coach Brian Schmetzer were clear:

“Chase everything, put their defenders under pressure,” Bruin said. “Press the game. The turf’s not the greatest, the ball can be bobbly. That’s exactly what happened on the cross, and I poked it in.”

Seattle (0-1-1) gave up its first goal in the 17th minute when Ignacio Piatti sent a through ball that found Matteo Mancosu in space to stretch the Sounders’ center backs out of position. Mancosu neatly slotted the ball past Stefan Frei.

The Impact doubled their advantage in the 51st minute. Piatti pulled the ball away from Nicolas Lodeiro and ran down the field, drawing Torres and Chad Marshall toward him before firing a shot from outside the box past Frei.

Seattle did not mount a consistent attack against Montreal (0-1-1), despite outshooting the Impact 15-8. Most shots were hastily taken or the result of quick crosses that did not seriously threaten keeper Evan Bush.

Seattle’s first goal was also the result of a substitution in the 59th minute, when Schmetzer put Oniel Fisher on for right back Gustav Svensson. Fisher drew a penalty from Laurent Ciman in the 82nd minute after being fouled on the edge of the box. Lodeiro beat Bush to the left side of the net to bring Seattle within a goal.

Seattle fielded a nearly identical lineup to its season opener, a 2-1 loss to the Houston Dynamo, but swapped former Montreal man Harry Shipp for Alvaro Fernandez in the starting lineup.

With Svensson still starting in place of Fisher and first choice Brad Evans out at least five weeks with a calf strain, the Sounders were vulnerable at the back end due to Montreal’s speed advantage against Marshall, Torres and Svensson. The difference meant that the Sounders often found themselves on the back foot after quick turnovers, trying to counter the speed of Piatti, Mancosu and right winger Dominic Oduro.

Despite the rally, Schmetzer knew his team needed to eliminate the letdowns.

“We don’t want to have to fight and bite and scratch and claw and have to wait until 30 seconds until the end of the match to score two goals,” Schmetzer said. “We also don’t want to concede two goals. We’ve got to stop shooting ourselves in the foot.”

Seattle has its home opener March 18 against the New York Red Bulls (4 p.m., FS1). The Sounders seek to get off to a fast start against the team that finished atop the Eastern Conference standings last year.