The Seahawks and free agent running back Eddie Lacy, formerly of the Green Bay Packers, have agreed on a one-year deal worth $5.5 million with $3 million guaranteed. 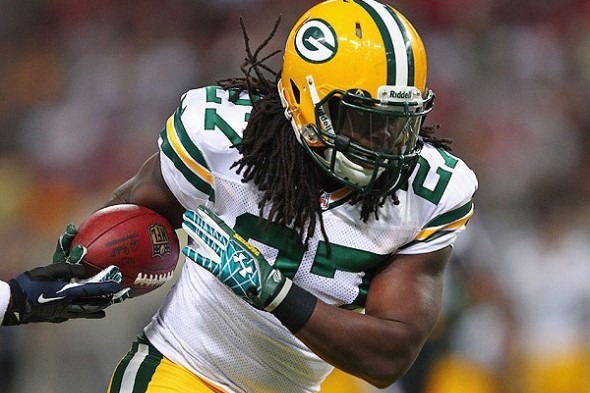 Eddie Lacy played five games the past season for the Packers before injuring an ankle that needed surgery. / Green Bay Packers

The Seahawks Tuesday agreed to terms with free-agent RB Eddie Lacy, a one-year deal worth $5.5 million with $3 million guaranteed. The 26-year-old, who spent his professional career (2013-16) with the Green Bay Packers, played five games last season before he was placed on injured reserve Oct. 20 after undergoing ankle surgery.

Overweight and injured the past two seasons, Lacy is the second reclamation project signed by the Seahawks in free agency. Last week, they inked Jacksonville bust Luke Joeckel, guaranteeing the tackle/guard $7 million for the 2017 season. Lacy made slightly more than $1 million last season.

“I like that we’re bringing in a big, tough guy that’s gonna send a message the way he plays,” tweeted Seahawks head coach Pete Carroll.

The 5-foot-11, 234-pound Lacy was on three national championship teams at the University of Alabama before the Packers selected him in the second round (61st) of the 2013 draft. He rushed for 1,178 yards and 11 touchdowns in his first year and was named the Associated Press Offensive Rookie of the Year and earned a Pro Bowl invitation.

Running like a younger Marshawn Lynch, Lacy followed with another 1,000-yard season in 2014, but has not had a 1,000-yard year since due to well-publicized weight and injury issues. At the least, Lacy provides insurance in case Thomas Rawls, who has yet to play a full season, can’t stay healthy.