Thiel: A dreary, but necessary, move for Huskies

The 107-66 loss to UCLA at a sold-out Hec Ed was the soul-crushing moment that revealed the breadth of despair in Washington men’s hoops. It was coming for a long time. Cohen did the right thing. 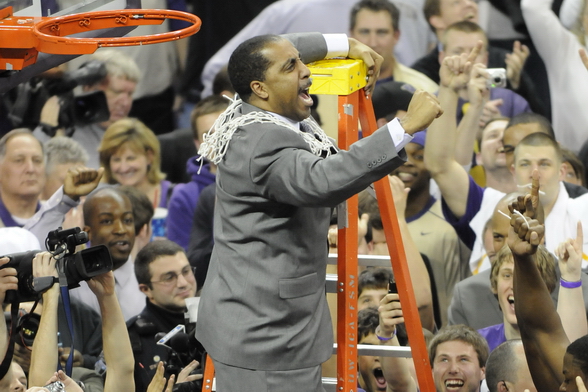 Lorenzo Romar knows a little bit about firing popular basketball coaches at Washington. When the coach during Romar’s two playing seasons at Montlake, the legendary Marv Harshman, was axed in 1985, he had just finished the second of two NCAA tourney appearances after sharing the Pac-10 championship both years.

But a 46-17 record in those two years meant nothing to university president Dr. William Gerberding. He wanted a younger, hipper coach who could indulge boosters with jokes instead of growls.

Community outrage could have created a tsunami on Lake Washington. Thirty-two years later, ripples are few at Montlake.

If Washington can dump a coach with back-to-back co-championships, it can certainly dispatch a coach whose team set a record of 13 consecutive losses while failing to reach  NCAA tourney six years in a row, as was done Wednesday.

As you no doubt have read, heard and perhaps experienced over the past 15 years, Romar is the embodiment of dignity, grace and caring concern in a profession pickled with scalawags, brigands and mountebanks. His strength of character and conviction, which translated into keeping Washington out of the NCAA hoosegow, was why former athletics director Scott Woodward had no problem in 2011 extending Romar’s contract to 2020.

Not only was Washington a destination job for Romar, an alum and former player, he would do his best to keep the Huskies’ athletics program out of the college-sports slammer, where it was in the early 1990s because of Don James and a decade later because of Rick Neuheisel.

Romar didn’t have to win a national championship, or get to the Final Four. He just had to keep things interesting, but not too interesting.

The hoops landscape changed. In 2006, the NBA damaged the college game by forcing the one-and-done requirement for potential pros. Every year, international scouting and foreign players became better. Across the state, coach Mark Few’s success at Gonzaga kept making the UW look feeble, so much so that Romar had to insist that the schools no longer play.

Then there were the in-game problems. The Huskies often couldn’t in-bound the ball properly. Or they sometimes couldn’t swing the ball from side to side to beat a zone. Or they “settled,” either for a cheap three on offense or a reach-in on defense. And it kept happening more often after capable assistants Cameron Dollar and Ken Bone left for head coaching jobs.

In recruiting, Romar was finishing a close second on some difference-making players, like Zach LaVine and Aaron Gordon. Then players start transferring out. They all said nice things about Romar, then let the sentence drift off.

One who didn’t was Nigel Williams-Goss, who left after two seasons and transferred to Gonzaga, where he is leading the Bulldogs into the NCAA tournament Thursday as a No. 1 seed.

In a book this fall about Gonzaga’s success, Glory Hounds by former Times and P-I sportswriter Bud Withers, Williams-Goss offered a telling assessment:

“I felt after my freshman year, a lot of the things we had talked about (that) were going to change going into my sophomore year, I didn’t see a lot of that change happening. It’s one thing, I feel like, to lose, but it’s another thing when you’re not doing everything in your power, or your capability, as far as preparation in trying to win. I just felt there were a lot of stones left unturned before games, and stuff like that. I had talked to past players, where they kind of had similar experiences . . . I just felt it was best for me to move on.”

The Huskies over the past few seasons often have seemed unprepared. A game’s inevitable turns seemed baffling. No solutions were forthcoming. This final season was bleak, a 9-22 debacle that had its nadir Feb. 4. In front of the first home sellout in five years at Hec Ed, UCLA slaughtered the Huskies 107-66, a schoolyard bully clobbering a third-grader for his lunch money.

This was the biggest defeat in Romar’s tenure, and the worst in the past 19 seasons, a dismal experience despite having Markelle Fultz, the likely No. 1 pick in the next NBA draft. That’s when I wrote that a change had to be made. Romar was still an admirable person, but he was no longer an admirable game coach. Twelve of the players on the roster were freshman or sophomores, and they may have been emotionally scarred for life.

I thought he would survive in the job, because of his “protections” — a $3.2 million buyout and perhaps the best incoming recruiting class in UW history. But athletics director Jen Cohen looked past the near horizon to the far one and made the right call. The UCLA game was part of a season-ending run of 13 consecutive losses that was the acme of futility and mortifying for a sports program that aspires to championships.

Cohen has been around Washington athletics for 18 years as an employee, and for many years prior as a fan. This decision looked and sounded as if it tore her up. But she persisted in her evaluation to the critical conclusion.

“I just wanted to see the program improving,” she said at a campus press conference Wednesday afternoon. “That just didn’t happen.”

Then she told the players.

“It was awful,” she said. “I wouldn’t have expected anything different.”

For the many who have celebrated with and for Romar, who have felt the warmth of his embrace and the sincerity of his convictions about how boys should become men, Thursday was excruciating. As it was necessary.

Cohen did a hard thing well. Now, it gets a littler harder, until it gets better.