The freakish run from nowhere to the MLS title is highly unlikely to be repeated by the Sounders in 2017. Which doesn’t preclude a younger, deeper team from repeating in a more conventional way. 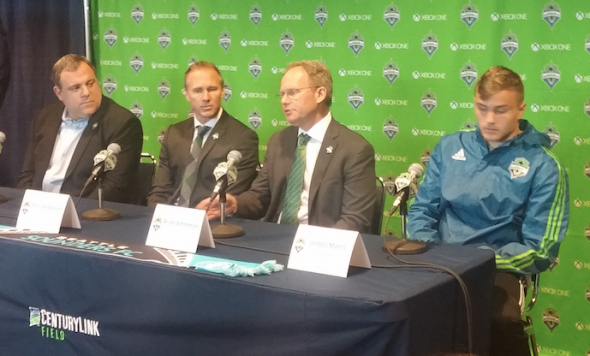 If Sounders fans are honest —  a virtue recently in cultural decline — they would probably admit that the way the MLS Cup was won last season was sufficiently preposterous to be akin to being struck dead in a forest by a meteor.

Much more pleasant, certainly, but just as random.

Before you take up a keyboard in disputation, Sounders general manager Garth Lagerway would agree with the contention, at least as it applies to the task of the 2017 season.

“Our championship will be judged one of two ways,” he said Friday at the club’s annual media day ahead of the home opener Sunday with the New York Red Bulls. “‘Well, they got hot, got some bounces, won the final on penalties. Kinda fluky, or lucky.’

“Or it’s going to be, if we have a really good season: (The 2016 mid-season revival) was the jumping-off point, and they built on that from there.”

In a phrase, that’s the deal for the champs this year.

It’s a received wisdom in sports that defending a championship is harder than winning a championship. Going back-to-back in pro team sports, with free agency and parity designed to obstruct and annoy the titlists, is a difficult endeavor. To legitimize the first one, the Sounders need to win a second one.

The Los Angeles Galaxy was the last in MLS to do it, in 2011-12, with David Beckham and other A-list internationals drawn to Glamworld. But the league has expanded what seems like a half-dozen times since, diluting talent, yet becoming more attractive to a better class of prime-career imports.

The Sounders last summer picked up one of those, Nicolas Lodeiro, a 27-year-old Uruguayan and boss of all midfield. From his July 31 debut against the Galaxy, the Sounders went 7-3-4 to escape ninth place in the Western Conference and sneak into the playoffs on the last day of the regular season at 14-14-6, the acme of average.

Then they ran through Kansas City, Dallas and Colorado to reach their first MLS Cup, whereupon Sounders bunkered up in 19-degree Toronto to close down the championship into PKs, the most random of all ways to decide a team sports champion. And they won.

Lagerwey acknowledged that the relatively short burst of success from a desperate team, ignited in part by the one-time bounce of a coaching change to longtime assistant Brian Schmetzer, is not proof of dominance.

“When Brian took over in the middle of last year, we literally had to win nearly every single game, or else,” he said. “You had 20 steps along the way, and if you dropped one of them, it was over. When everyone rallies together, it’s pretty easy.”

Despite the success, Lagerwey was quick to part ways with some veterans, including Nelson Valdez, Erik Friberg, Andreas Ivanschitz and Tyrone Mears, along with retirements of Herculez Gomez and Zach Scott’s, to get youngsters who are unable to be visited by the virus of championship complacency.

He cited the acquisitions of Gustav Svensson, 30, Will Bruin, 27, and Harry Shipp, 25, and their insertion into key roles to help avert post-title drift.

“We have to re-ignite that hunger, that fire, we had at the end,” he said. “We were conscious of it in some of our choices in the off-season. We had some very good veteran players to help us win that title, and we opted to bring in some younger players that we hope are hungry.

“Those three weren’t part of that group. Can they step in and be important players for us this year and provide competition, so we don’t get complacent? We have that fresh blood in the group . . .  highly motivated to defend the title.”

Evidence of that was not very visible in the first two matches on the road, a 2-1 loss in Houston and a 2-2 draw in Montreal. But it wasn’t necessarily dismaying, because the short off-season, coupled with the integration of new players, made a slow start unsurprising.

Which is not the same as complacency. Of all teams, the Sounders know the consequences of a slow start. If their own 2016 season isn’t sufficient proof, all they need to do is look south to Portland, where the 2015 MLS champions failed to make the playoffs last season.

Lagerwey is loathe to fall back.

“I think we have a deeper team,” he said. “I think there’s a lot at stake this year, from a credibility standpoint, from a how-we’re-regarded-as-an-organization standpoint. Did we just get lightning in a bottle for four-five months, or can we take that success to the next level?

“That’s our challenge. I think it’s one we’re capable of doing.”

Yes, the roster has a generous sprinkling of players from Europe and Latin America, but they play in front of the largest crowds in North America, full of locals new and old.

Walking the talk a second time would put a remarkable bounce in Seattle’s rubber-booted step.