Thiel: Huskies have it semi-easy; Oklahoma next

After a slow start, Kelsey Plum still produced 29 points in Washington’s 91-63 win over Montana State. Next up in the NCAA tourney is Oklahoma, which beat the Huskies in each of the past two seasons. 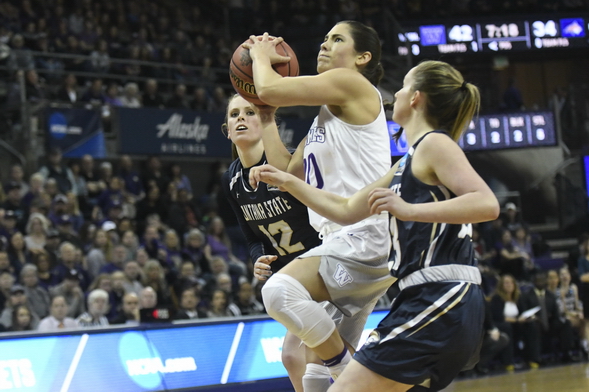 It had been 15 days since third-seeded Washington played a game, and the first quarter Saturday night looked as if the Huskies had been off a month. No. 14 seed Montana State was actually ahead, 18-17, and a rowdy group that made the trek from Bozeman to Hec Ed was momentarily swept up in the madness of basketball’s March.

Unfortunately for them, sanity raised its symmetrical, flawless head.

Chantel Osahor did her power thing, Kelsey Plum did her finesse thing, and the Huskies prevailed 91-63 to move to the second round of the NCAA women’s regional Monday against No. 6 Oklahoma.

While the spread was massive, it didn’t feel that way until well into the second half.

“You’re going to be rested or rusted — I was rusty,” UW coach Mike Neighbors said of the absence of game action, taking arrows for the slow start. “I called a couple of plays that were just kind of made up. They were the wrong calls. We made a couple mistakes and a team like that exposed us every single time.”

Given the bitterness that attended UW’s last game, a 70-69 upset loss to Oregon at KeyArena in their first game of the Pac-12 tournament March 3, the expectation was that the Huskies would offer up a ferocity that would cause parents in the crowd of 8,059 to shield the eyes of their children.

Instead, the Bobcats flashed greater resolve, and Plum just wasn’t Plum. Not until the final play of the first half did she hit something other than a layin or a free throw. The Huskies were up 38-27, but it was a trudge, not a gallop.

Yet she finished with 29 in 36 minutes, two off her average that leads the nation.

“Somebody said she had an off night and she still had 30,” said Bobcats head coach Tricia Binford. “I wouldn’t want to see her on a night when she had 57. She is just tough, period.

“Our plan going in was to take away the three-point line and foul line and we obviously didn’t do the job on the foul line. She was just was really, really good.”

Plum hit all eight free throws and was 10 for 20 from the field. But her 1 for 7 night beyond the arc echoed her 2-for-9 game in the Oregon loss.

“I think they just didn’t go in,” Plum said nonchalantly. “Ten for 20 usually isn’t that tough for most people. In this case, I guess it is. I almost get excited because I know it’s going to come eventually.”

Indeed, Plum has set the bar mighty high. That might be useful starting at 6 p.m. Monday, when the sixth-seeded Sooners, who dispatched No. 11 Gonzaga 75-62 in the day’s first game, spoiling the potential intra-state matchup with the Huskies, show up at Hec Ed for the second-round match.

The Big 12 Conference entry is a more serious threat than Montana State to the Huskies’ chances at a repeat Final Four appearance. In fact, the Sooners have won the past two meetings with Washington.

Two years ago, the sophomore years for Plum and Osahor, the Huskies played at Oklahoma and were mostly dominated, falling behind 18-2 and losing 90-80.

Plum set her personal and school record for points that night, 45, which endured until last month’s 57-point shocker against Utah. Washington also lost to the Sooners 71-68 at Hec Ed in December 2015.

So figure that Plum is ready to deal Monday.

“She took (the loss at Oklahoma) like she takes them all — personally,” Neighbors said. “She would have traded 45 for a win. We were shell-shocked. We never played in front of a group that big.”

Plum’s legendary post-defeat intensity, which has included returning to the gym the same evening to exorcise her demons, may be giving way to a more cerebral reflection. Asked how she handled the defeat to the Ducks two weeks ago, she described a new routine.

“I actually took a day to just not do anything,” she said. “I think it was good for me. In the past, immaturely speaking, I would have just tried to work harder. That’s not always the best way to do things.”

Osahor will see to it that Plum doesn’t need to go super-hero all by herself.  The nation’s leading rebounder added another 19 boards to go with 16 points and a team-high three assists to impress Binford in the coach’s first up-close experience.

“You can watch her on film and obviously, her strength shows,” he said. “But until you are truly trying to box her out or get position, you don’t know.

“There were some possessions where we had the position, and there’s nothing I can ask more of from my players, and she still got the rebound.  She also has very good instincts and timing.”

However much rust there was early against Montana State, by game’s end, Plum and Osahor shined. And there’s only a single day off until meeting the Sooners, who bring a couple of years worth of bad memories.