Designated in 2015 as the successor to Jim Boeheim as Syracuse head coach after the reiirement of Jim Boeheim, Mike Hopkins was named Sunday to succeed Lorenzo Romar at Washington. 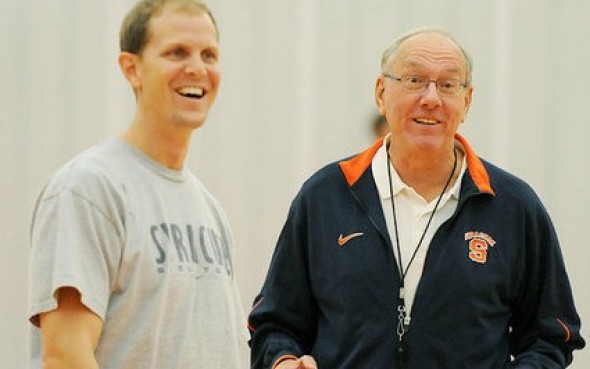 Mike Hopkins was going to succeed Jim Boeheim, and now he will succeed Lorenzo Romar. / syracuse.com

The University of Washington has hired Mike Hopkins, 47, the designated successor to Jim Boeheim at Syracuse, to replace Lorenzo Romar as men’s basketball head coach.

“I’m extremely excited to welcome Mike and his family to Seattle,” UW athletic director Jen Cohen said in a statement released by the school. “His resume and reputation within the basketball community made him stand out to us, but ultimately it was his vision for Washington, his passion for teaching and developing student-athletes and his close alignment with the core values of our institution and department that made it more than clear that he was the right fit for us.”

CBSSports.com was the first to report the story Sunday morning.

“The University of Washington is such a unique place, with a world-class University, an exciting basketball history and unbelievable fan support,” Hopkins said in a statement. “Together, I believe we can build something very special in Seattle, and I can’t wait to get started.

“I can’t express enough thanks to Coach Boeheim for so many years of mentorship and guidance. The timing is right for me and my family to make this move.”

A former Syracuse player, Hopkins has been an assistant for 21 years at the New York school, which did not make the NCAA tourney this season. Syracuse’s season ended Friday, when, playing at home, the Orangemen were knocked out of the National Invitational Tournament by Mississippi, 85-80.

In June 2015, the school’s president announced Hopkins’ title would be head coach-designate, to succeed Boeheim after his scheduled retirement following the 2017-18 season.

During his time in New York, Syracuse advanced to postseason play in all but one year. He was a part of 16 NCAA Tournament appearances, including the 2003 National Championship, four Final Fours, five Elite Eights and 10 Sweet 16s, along with four NIT berths. Additionally, Syracuse never dipped below a .550 record while Hopkins was on staff.

A California native and graduate of prep powerhouse Mater Dei in Santa Ana, Hopkins, a 6-5 shooting guard, led Syracuse as a two-year team captain to the Big East Conference championship in 1991-92. He played in the Continental Basketball Association and in Europe before joining Boeheim on staff in 1995.

Hopkins earned his undergraduate degree in speech communications from Syracuse in 1993. He will be joined in Seattle by his wife Tricia, and their sons, Michael Griffith Jr. and Grant Richard, and their daughter, Ella Grace.