The chance for a big-stage flop was real in the ceremony-filled opener, but the Sounders responded in the Sunday win over the New York Red Bulls like the champions they are. 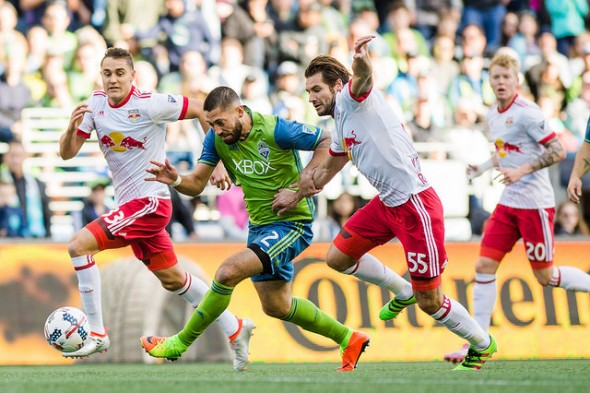 The opportunity for a face-plant was rich: National TV, sellout crowd, unveiling of the MLS championship banner, and a what-in-THE-hell sunny afternoon in a Seattle March weekend. Really, it was all set for “La La Land wins best-picture Oscar — not” moment.

Just in time, too — they needed the win.

Against a New York Red Bulls team that has had the best record in the Eastern Conference the past two seasons and was riding an 18-match unbeaten streak, the Sounders won 3-1 Sunday and, dare it be said, looked at times artful in doing it.

In the run-up, much of the fret was that the Sounders would be swooning from the adoration flowing out of 46,500 fans at the Clink — a home-opener record — in the first re-embrace since the championship parade. Indeed, they were caught looking back.

“We didn’t want to start like we did last year — we don’t want to do that this year,” said midfielder Cristian Roldan, nailing the proper anti-hoopla sentiment. The Sounders began the 2017 season on the road with a loss and a draw, so any smugness appeared to have been slapped off their faces.

“I thought everyone was spot-on today,” he said. “We’re very pleased.”

Coach Brian Schmetzer admitted that a home-debut pratfall was never far from his mind.

“It was kind of a trap game in the sense of, ‘Are you going to get carried away thinking about last year?’” he said. “The referee blows the whistle. and all of a sudden you have to switch gears and say, ‘OK, we’re 0-1-1.’”

They are now 1-1-1, which dazzles no one. But based on Sunday’s play against a quality opponent with title aspirations, it suggests that this is a fairly bright, experienced group that is less likely to flutter than most.

One of the distractions that has so far failed to materialize is the tricky task of re-integrating Clint Dempsey. The Seattle superstar was pulled from the lineup in August by a heart problem, just four games after the arrival of midfield wizard Nicolas Lodeiro. Dempsey had no role in the second-half renaissance that led to the franchise’s improbable run to the title.

Cleared by doctors to return in the preseason, no one knew what to expect from Dempsey’s physical and emotional condition. But he has surprised all with three 90-minute games that have shown little fall-off.

Dempsey was in a hurry after the game — he had to catch a flight to San Jose to begin training with the USMNT for World Cup qualifiers — so he didn’t stop to talk. But coach Brian Schmetzer was happy to explain.

We saw some of (the interplay with Lodiero) in the four games Dempsey was here,” he said. “Then we have a world-class player, who through circumstances we can’t control, had to take time off. Any layoff of six, seven, eight months for any player is going to be a difficult one for both player and team. I think what you saw from Clint today was someone who fully bought in to the Seattle Sounders. He was defending, working. He wants this team to succeed.

“I’m not going to crown us kings of this very competitive league yet. But I do think that some of our potential puts us among all of the top teams.”

Based on one game’s observation, an attack that includes Dempsey, Lodeiro, last season’s rookie of the year Jordan Morris and newcomer Harry Shipp, has the makings of a serious headache for opposing defenses. With the swift Joevin Jones often coming up from the back, it will get complicated for foes.

A goal in the 66th minute set a standard for the season. Jones along the end line slipped a ball between the legs of defender Sal Zizzo, then upfield to Lodeiro, who downloaded quickly to Morris a few yards in front of the goal. Having no luck earlier in the game with more difficult chances, this one off his head came easily for a 2-1 lead.

“I don’t really remember how (the ball) got to the endl ine,” Morris said. “But Joevin got down there and beat his guy, slid it back to Nico and I was just kind of lurking around the back post hoping the ball would come in.

“Nico put in a perfect ball and it didn’t leave me with much to do, so credit to them.”

Three perfect touches from three premier players is the kind of forward thinking that keeps Sounders fans from the need to look back.