Despite his small frame and lack of breakaway speed, Harry Shipp has quickly integrated into an offense that will cause opponents distress. Shipp scored on a re-direct in the home opener.. 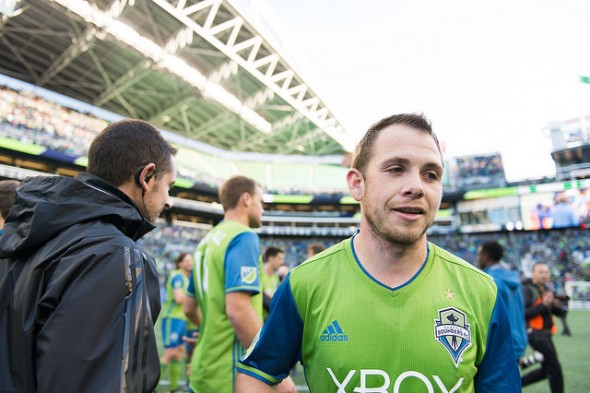 Newcomer Harry Shipp played a pivotal role in the Sounders’ 3-1 victory in the home opener over the New York Red Bulls Sunday, fitting in well with a free-flowing attacking style that dragged New York’s defense all over the Clink field, allowing Shipp to bag an insurance goal late.

Shipp arrived from Montreal in the offseason hoping to revitalize a young career after a surprise trade from his native Chicago and a down year in Canada trying to play a style of soccer that did not fit his athletic strengths. The 25-year-old said when he arrived in January that he felt Seattle’s style of play would suit his skill set.

Sunday, after his first full 90-minute contest, he explained what he meant.

“I like to pop up in different spots. That fluidity, and having the constant threat of having (defenders) being scared of Jordan (Morris), it makes the job for us three a lot easier because it creates space in front of the back four.”

Shipp’s goal came in unconventional fashion in the 79th minute with the Sounders up 2-1. A series of quick passes found left back Joevin Jones in space 25 yards from the goal. Jones sent a shot along the ground toward the net, where Shipp’s run was set to intercept the ball. Shipp stuck out his foot, redirecting the cross-goal effort to the near post and catching New York goalkeeper Luis Robles lunging the wrong way.

Shipp teased his teammate about the deflection.

“We played together for a year in Chicago so I’ve known Joevin for a while,” Shipp said, laughing. “I was giving him a hard time for how bad of a shot it was.”

Beyond his chance redirection, Shipp fit right in to the creative attack by Seattle (1-1-1). He combined with teammates to create quick passes and send first-touch through balls with his back to New York’s goal.

In the 44th minute, Shipp dribbled the ball along the top of the 18-yard box and drew three defenders before flipping a pass past the wall of New York players to Lodeiro, who fired a shot with his left foot that bounced off the left post and out of play.

In all, Shipp took 57 touches and completed 84.6 percent of his passes, the highest percentage of any of Seattle’s front four.

Shipp, who played at the Clink once before with Montreal last season, noticed a difference in having the crowd on his side.

“We have confidence,” Shipp said. “I think when we were playing here with Montreal last year, you could just tell how confident (Seattle) was playing at home. It’s the same thing today being on the other side of that. That goes a long way toward creating chances and scoring goals.”

The Sounders scored first on a penalty kick by Clint Dempsey in the 28th minute after Robles fouled Morris on a breakaway.

New York (2-0-1) responded in the 57th minute, when Bradley Wright-Phillips headed a cross from Sal Zisso into the upper left corner to tie.

Morris scored the game-winner with a header in the 66th minute, after Jones nutmegged a defender on the end line and dropped a quick pass to Lodeiro, whose cross found an unmarked Morris at the back post for an easy finish.

Shipp does not possess the speed favored by many in an attacking midfielder, but his lateral agility and field vision mean that he meshes well with the forward attack.

Sounders coach Brian Schmetzer was pleased with Shipp’s performance and the speed with which he has integrated into the team.

“It’s kind of a possession-based team, so he fits right in there,” Schmetzer said. “We love Harry because he’s very humble and hardworking. All the attributes that I like in a player. He doesn’t want to take credit for the goal. He’s a great kid and I’m happy to have him.”

If Shipp continues to help Seattle swarm opposing back lines, he will once again be regarded as one of the league’s most dangerous distributors.