From Sonics 1994 loss to Nuggets, to the first firing of Sigi Schmid, to hiring of Pete Carroll to denying Chris Hansen, Tim Leiweke has been all around Seattle sports. Now he seeks to be arena king. 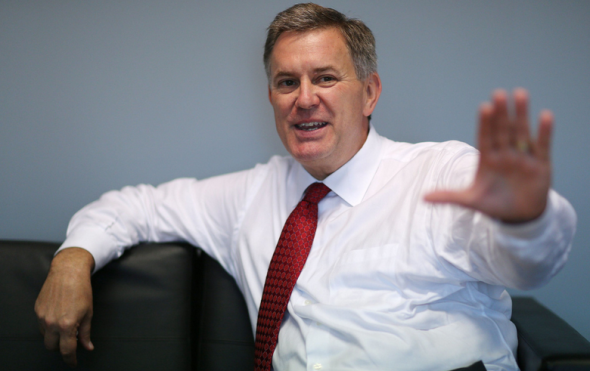 Before the merits and demerits of KeyArena’s potential makeover for the NBA and NHL are evaluated starting April 12, it may be useful for Seattle to get acquainted with one of the prime players in the latest turn in the drama. Because Tim Leiweke already knows a lot about Seattle and its sports.

As founder/CEO of a relatively new company, Oak View Group, that is one of two outfits — the other is Anschutz Entertainment Group (AEG), his former longtime employer  — Leiweke is betting large coin he can re-make what was the NBA’s smallest, oldest arena into a world top-10 concert/sports venue.

He also believes he can do so at minimal cost to the public, on Seattle Center’s public land, and make it a better deal for the city than a competing proposal from Chris Hansen for an arena in Sodo.

Urged on by his brother, Tod, the former Seahawks CEO who hired coach Pete Carroll and GM John Schneider and is now chief operating officer of the NFL, Tim Leiweke calls the potential Seattle project “the flag property” of his young OVG enterprise.

“We entered the fray with an enthusiasm and a love of this marketplace, and it’s not a new-found love,” he said in a 90-minute interview during a visit earlier this month. “I have a history here, and more important, my brother has a history and tradition here.

“You hear his inspiration in me. I give him full credit. My wife and daughter lived here when I married. This is my second home. I don’t claim all the answers, but I know if we build it, they will come.

“If you make a bet on sports facilities today, there is no place greater than this one. I plan to build an arena and get a winter-sports team all in one shot.”

Leiweke is not lacking in confidence, sales skill or sports-business experience. His path has intersected with Seattle’s sports history on numerous occasions.

1994: He was president of the NBA Denver Nuggets when they pulled off one of the greatest upsets in sports history. After barely making the post-season field as the eighth seed, the Nuggets, led by shot-blocking center Dikembe Mutombo, upset the No. 1 seed, the 63-win Sonics, three games to two.
“I’ve never seen an organization so stunned,” Leiweke said. “There wasn’t any way we were going to beat those guys.”
The Sonics president at the time? Wally Walker, now a partner with Hansen in the Sodo arena project.

2004: Leiweke was president of the MLS Los Angeles Galaxy, owned by AEG, in 1999 when he hired Sigi Schmid from UCLA to coach the Galaxy. Leiweke was also the guy who fired Schmid, despite three appearances in the MLS Cup and one title, in mid-season 2004. Schmid moved on to coach the Columbus Crew, winning another title.
After three seasons, when the expansion Sounders were looking for a first head coach, Schmid took a meeting with the Seahawks/Sounders president.
“Hi,” said Tod. “I’m the good Leiweke brother.”
It worked. Schmid was hired, and took the Sounders to seven playoffs in their first seven seasons.

2010: Tod Leiweke had another big coaching decision to make. He wanted to sign away Pete Carroll from USC to replace Jim Mora as Seahawks coach, but needed a private place in Los Angeles where the parties could meet without public notice or interruption. Tim Leiweke offered dinner in the solitude of the back yard of his home, where the deal that transformed the NFL franchise was struck.

2013: Tim Leiweke was a member of the NBA Board of Governors representing the Toronto Raptors, which was owned by his Maple Leafs Sports and Entertainment company. When the contentious relocation of the Kings from Sacramento to Seattle — where Hansen and then-partner Steve Ballmer sought to move the club after offering its owners a  then-outrageous $625 million — came up for a vote of owners, Leiweke was one of 22 to vote no.

Leiweke has been around the block in North American pro sports, much of it through a personal and business relationship with Philip Anschutz, a reclusive Colorado billionaire and owner of the AEG empire who came to great wealth from deals in oil and gas, real estate, railroads, telecommunications, and sports and entertainment. 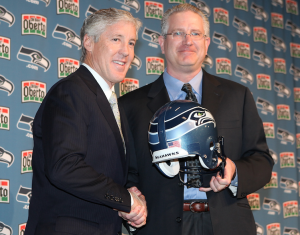 On the day of his hire in Seattle, Pete Carroll greets Tod Leiweke. / NBC Sports

The two split up in 2013 over disagreements about the direction of AEG, which had been for sale until Anschutz pulled it off the market. The company also lost out with a plan to build an NFL stadium in downtown Los Angeles that already had, thanks to Leiweke’s salesmanship, an insurance company as naming rights sponsor: Farmer’s Field.

Now Anschutz and Leiweke are pitted against each other in Seattle, where Mayor Ed Murray in January put out requests for proposals from developers to provide a privately funded alternative at Seattle Center to the Hansen project.

Murray has not embraced the Sodo arena because of the Port of Seattle’s opposition to the location on its doorstep, and because Murray, up for re-election in November, would gain political credibility if he could revitalize the Center at relatively little public cost.

Also, he has expressed public skepticism about Hansen’s ability to deliver a team.

One of Leiweke’s key selling points to Murray is the relationships that have come from his long-term experience as an executive and arena planner with several NBA and NHL franchises.

“I don’t do anything without the approval, direction, input or blessing of commissioners Adam Silver (NBA) and Gary Bettman (NHL),” he said. “You should never get ahead of a commissioner. Nothing is going to happen in Seattle regarding a winter sports franchise without the permission of commissioners Silver or Bettman.”

At least four times in the interview, Leiweke made similar references about his deference to leadership he knows well. He was positively laudatory about Silver’s predecessor, David Stern, who has been an ally of Leiweke’s in his tenures with the Timberwolves, Nuggets and Raptors franchises.

“I was tutored and raised by David Stern,” he said. “He is like a father. He was a mentor to me. He put me in Denver to save that franchise.”

Told that mention of Stern’s name in Seattle is likely to get beers, and especially Starbucks coffee, spilled in his direction, Leiweke smiled. 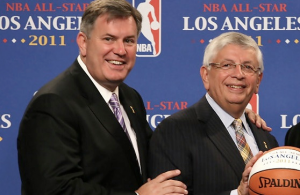 “During Stern’s time as commissioner, he will tell you that (Seattle losing its franchise) was one of the things he regrets the most,” he said. “David and I have talked about this very situation we’re in today. David is the biggest fan for making this work.

“He was intimately involved in Sacramento (politicking to deny the Hansen relocation request). David believes there’s a way to get things done. Gotta play by the rules. When you don’t, (commissioners) don’t like it.”

Without saying so, Leiweke was making apparent reference to Hansen’s mistake of giving money to the anti-arena campaign in Sacramento, for which he paid a fine to the California elections commission and apologized.

It’s the kind of mistake that politicians find hard to overlook. Leiweke is eager to parlay that into skepticism about Hansen, a Seattle native and San Francisco hedge fund manager with no previous experience in sports management — and who no longer has as a partner Steve Ballmer, whose $20 billion net worth can get commissioners to overlook many an ownership group’s sins.

Leiweke’s knowledge of the sports/entertainment landscape is largely why he is offering a business plan fundamentally different than Hansen’s plan. Leiweke wants to create a music-first venue that can later accommodate NBA/NHL. Hansen, of course, is sports first.

Leiweke’s partners in Oak View include music-industry titan Irving Azoff and Madison Square Garden’s James Dolan, another big music-industry player who also owns the NBA Knicks and the NHL Rangers. Oak View has created an alliance among 26 arenas around the country in which the company helps coordinate concert tours and increase arena revenues from naming rights and sponsorships, while helping solve issues regarding tickets, technology and building security against terrorism.

Putting concerts first in his proposed Seattle arena unhooks the project from league timetables, or lack thereof. And since he believes a Center arena can be done in three to four years from June 30, there is no immediate urgency.

Hansen, who spent $125 million to own all his project’s land in Sodo, contends that circumstances with pro sports franchises can change quickly and unpredictably, such as Los Angeles Clippers owner Donald Sterling’s ugly racial remarks that forced his expulsion from the NBA and eventual sale of the club to Ballmer. Hansen’s project can be shovel ready if and when the City Council re-votes to vacate Occidental Avenue.

“Here’s what I know,” Leiweke said. “There’s no team moving in the NBA. There’s no expansion team coming — which is not just the will of Adam Silver, but the owners. We believe a team will come eventually. If we build (a Center arena) to a standard acceptable to both leagues, we are absolutely convinced we’ll get a team.

“I happen to think it will be NHL first. That’s just math — 31 (teams instead of 32 with Las Vegas beginning in the fall) doesn’t work. Seattle is so great an opportunity that my company, my investors, are willing to take this risk. If it doesn’t happen, will we go broke? No. We have a lot of money behind us; that’s the good news. This is what we do for a living.”

Leiweke says he has no back-channel assurances from either commissioner about getting a team, nor does he fear building an arena without an anchor sports tenant — “I’ve built (while at AEG) more spec arenas than anyone in the world,” he said.

He concedes the proposed Seattle project is the first of its kind for his new company, and  he hasn’t arrived at final cost figure yet. But he also knows that the tumultuous saga among the NBA, KeyArena and Seattle politics going back before the 1995 remodel has left a scar with owners and commissioners, too, resulting in apprehension about dealing with Seattle again.

“What I believe is if we don’t get (a Seattle arena) built first, Silver and Bettman are always going to hesitate as to whether anything can get done in Seattle because of the history here,” he said. “Only by doing (a concert arena before sports) will we have the best chance to ultimately convince a league to bring a team here.”

Part 2 Wednesday: Leiweke won’t give away his plans before April 12, but he did offer three hints that are part of the solution to making an arena at Seattle Center work: Amazon, the Monorail and dirt.