Thiel: Huskies have a farewell party to remember

Kelsey Plum had her first career double-double as Washington routed Oklahoma 108-82 Monday, moving on in the NCAA tourney and leaving an indelible memory of a great hoops time. 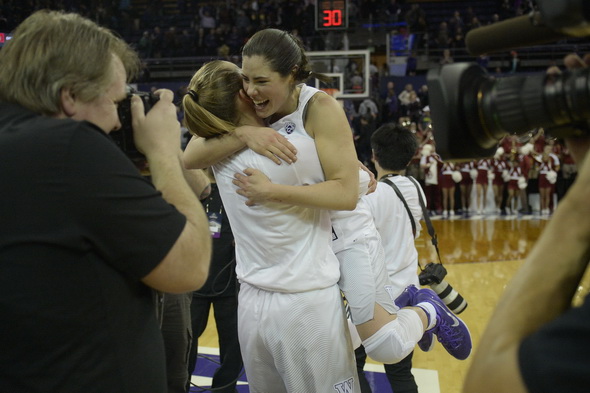 Kelsey Plum gets a hug from a teammate during the post-game celebration. / Alan Chitlik, Sportspress Northwest

In year nine of the NBA exile, in a season when the Washington men were sufficiently abysmal that the beloved coach of 15 years was fired, the Huskies women’s team did basketball fans hereabouts an immense solid.

They are not just a team. They are a perambulating celebration.

Monday night was the final go-round in the old Montlake barn for the senior class led by Kelsey Plum and Chantel Osahor, who rolled like the heyday of John Stockton and Karl Malone. They entertained in ways unseen here since the 2005 men’s team of Brandon Roy and Nate Robinson.

You hadda be there. If you were among the fortunate 7,579, I bet you a beer the smile is still on your face.

Unless you were the Oklahoma Sooners. They came into Hec Ed with a 23-9 record and a confidence-boosting win Saturday over a good Gonzaga team in the opening round of the first NCAA women’s tourney held here since 1995.

Hey, the Okies were a six seed and had beaten Washington two years ago in Norman and last season in Seattle. This was no Montana State.

The Sooners were freight-trained, much in the way another Sooner, Seahawks linebacker Brian Bosworth, experienced his goal-line encounter with Bo Jackson.

“Got the crowd behind them and it becomes this engine that is very difficult to stop,” said coach Sherri Coale. “Washington was unbelievable offensively tonight, just unbelievable.”

That may be understating it.

The 108-82 defeat was more than dominating; it was euphoric. In the second round, the Huskies shredded a team that is one of 10 in Division I men’s or women’s basketball to have an active streak of 18 or more consecutive appearances in the NCAA tourney. They have a 33-19 all-time tourney record.  They are serious dudes.

But Washington shot 57 percent for the game, 60 percent from beyond the arc and had four players score at least 16 points in posting the highest total of the season. Against a good defensive team, the Huskies made only eight turnovers, only four of which coach Mike Neighbors counted as live-ball with the starters.

“I’m really at a loss for words, which I rarely am,” he said. But Neighbors rallied: “I’m super proud of our group as a whole.

“Someone mentioned the other day we walked with a little big of a swagger. I don’t think we had that last year (when the Huskies reached the Final Four). I think there was joy, elation and excitement. With this group of senior leaders, I am worried about way less things than I was worried about last year.”

Which is good for them, because No. 3 Washington flies to Oklahoma City for a 4:11 p.m. PT Friday game in the Sweet Sixteen against No. 2-seeded Mississippi State (31-4), which routed No. 7 seed DePaul 92-71 Monday.

The thing Neighbors has to be thrilled about was the Monday success was something more than Plum’s 38 points and 11 assists — her first career double-double while setting the NCAA single-season points record (1,097 and counting) — or Osahor’s 16 points, 15 rebounds and seven assists.

This game, junior guard Natalie Romeo scored 20 (6 of 10 on 3s), and freshman guard Aarrion McDonald had 18, and 6-3 senior center Katie Collier handled well the defensive assignment of a Sooners guard. The contributions from more than the dynamic duo is essential if the Huskies want a return to the Final Four and potentially a shot at the colossus of Connecticut.

But this was also the farewell game for Huskies fans who have marveled at the two stalwarts. The crowd stood for the final couple of minutes as the two were called from the game to receive ovations for feats and styles that may not be seen again.

They are the nation’s leading scorer and leading rebounder, a tandem unprecedented in the history of the NCAA, men or women.

At game’s end, they were mobbed by teammates, who joined them in a group wave to fans who stood clapping, hands above heads.

They also were a part of a third-quarter scene that nearly brought down the house.

During a long break in the action as the officials looked at video replay before calling a flagrant foul against the Sooners, one of the bored Oklahoma reserves began playing air guitar along the bench to the arena music. She was soon joined by another teammate/dancer. As the video screen caught their acts, Huskies reserves felt compelled to answer.

Soon the dance-off was on, the crowd howling with delight. Even the coaches started giggling. I can’t imagine men’s coaches Bob Huggins and Sean Miller doing anything but offering weapons-grade scowls and ordering suspensions.

“I was cracking up,” Osahor said. “I thought it was awesome.”

“I think we lost, though,” said Plum. “The girl from Oklahoma did some crazy stuff.”

Osahor was asked whether to moment speaks to women’s basketball.

“It is fun, but it also show that we respect each other,” she said. “No hard feelings. We’re playing against each other but were also playing together. It is all for women’s basketball in general.”

The women’s game had itself a night with Washington. And Plum had a dream fulfilled.

“I thought about it a lot,” said Plum, a San Diego-area native, of her last home game at UW. “I visualized it, thought about it, dreamed it — whatever you call it. There was no way that I was going to lose this last game on my home court.”

No worries. She left UW with a W, and she and teammates left a memory of how exhilarating the women’s game can be, in place that may have forgotten what championship-quality basketball looks like. 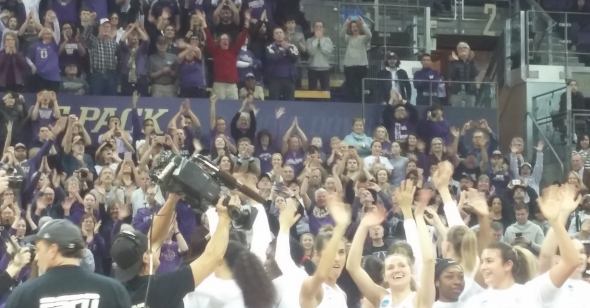