Career assistant (22 years) Mike Hopkins is a West Coast native and Syracuse alum who will take over the University of Washington basketball program. His story. 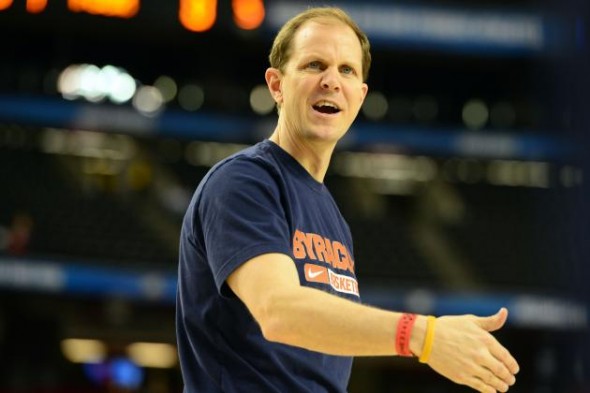 Mike Hopkins, who will be formally introduced as Lorenzo Romar’s successor at the University of Washington Wednesday, spent the past 22 college basketball seasons as an assistant coach at Syracuse University under Hall of Famer Jim Boeheim. Hopkins is a West Coast native (born San Mateo, CA. in 1969) and was a member of the 1987 California state championship team at Mater Dei High School (Santa Ana).

Following graduation, Hopkins enrolled at Syracuse University as a speech communications major. He redshirted as a freshman, then over four years went from benchwarmer to team captain. He earned the nickname “The Hoperator” from teammates because of his determination, hustle and aggressive play. How his career evolved:

1989-93: Played sparingly his first two years at Syracuse, but in 1991-92 led the Orange to the Big East championship, personally clinching the title by coming off the bench to hit a free throw with three seconds to play to lift the No. 13 Orangemen to an 84-83 win over No. 10 UConn at the Carrier Dome. A 6-foot-5, two-year starter at shooting guard, Hopkins averaged 9.2 points and 3.7 rebounds in 111 career games.

“It was my dream to be at the ’Cuse. It didn’t matter if it was 20,000 degrees below zero outside. I was in heaven. Nothing could distract me away from that. I was motivated every day. I’ve always taken the underdog approach.” – Hopkins on his time at Syracuse

1993-95: After failing to stick in the NBA, played professionally in the Continental Basketball Association with the Rochester (MN.) Renegades and in Europe with teams in Turkey and Holland.

2000: Added recruiting responsibilities and played a major role in bringing to campus Gerry McNamara and Carmelo Anthony, players who helped the Orange win the 2003 national championship.

“Hop was one of the main reasons I went to Syracuse.” – Anthony

2001: Joined Boeheim’s USA Basketball staff as a court coach for the men’s national 21-and-under team trial. Helped select the squad that won the gold medal at the World Championships in Japan.

“I knew Hopkins was the real deal. He’s relentless with recruiting and he’s good with people.” – Boeheim

“He’s created a different energy level here over the last decade. His passion and energy are infectious. I think that’s pretty obvious. If you’re around him, he gets the most out of you every day.” – McNamara, Syracuse assistant

2010: Served as Team USA court coach at the 2010 FIBA World Championships in
Istanbul.

2011: Transitioned to working with Syracuse centers, a post in which he guided future NBA draft picks Fab Melo and Rakeem Christmas.

2012: Named by Duke’s Mike Krzyzewski as an assistant coach of Team USA for the  Olympic Games. During one practice session, Hopkins, at the request of Kobe Bryant, guarded the Lakers star for 90 minutes as Bryant worked on one-on-one moves.

“It ended up being one of the greatest memories I had as a coach. I’ve always been a huge Kobe Bryant fan.” – Hopkins

2013: Interviewed for, but was not hired, as head coach at the University of Southern California (Andy Enfield was hired).

“Mike was by far, the best candidate USC had. People in those situations, they try to take a guy who is a head coach so they can say they hired a head coach, that’s all. Mike is 10 times better than anyone they could have hired.” – Boeheim

“I’ve had opportunities. I have also interviewed and didn’t get jobs. But I always look at it as a learning experience. I dream about being a head coach all the time. I’m a big learner.” – Hopkins, who also interviewed with or was courted by Boston College, St. Bonaventure, Oregon State and Charlotte

2014: Worked as an assistant coach for Team USA at the FIBA Basketball World Cup, hosted by Spain.

2015: Named June 25 as Syracuse’s head coach-designate, scheduled to take over for Boeheim following the 2017-18 season, after helping the Orange advance to postseason play in all but one of his years on staff. The run included 16 NCAA Tournament and five NIT berths, three trips to the Final Four and the 2003 championship.

“It would take something really extraordinary to get me to leave Syracuse.” — Hopkins

2017: Selected March 19 as coach at the University of Washington.

“I think anytime you have your blood, sweat, tears, heart and soul in a place, it is extremely difficult to leave. But the timing is right for me and my family to make this move.” – Hopkins

“Mike has proven to me over and over again that he understands the game, the players, the other things that surround what a head coach has to do.” — Boeheim

“You guys (UW) have been so blessed to get Mike Hopkins, I’m telling ya. You guys hit a grand slam.” — Daryl Gross, former Syracuse athletic director

Excluding the nine games during the Boeheim suspension, Hopkins has never run his own program. He is the first man without previous head coaching experience hired as head man at Washington since Mac Duckworth came aboard in 1964, and only the fifth such individual in the past century. Washington’s head coaches since the end of World War I (those without previous head coaching experience in bold):

An Arkansas native, Duckworth worked as an assistant for his predecessor, John Grayson, before his elevation to head coach. Duckworth never had a winning season at Washington during his five years.

McLarney, whose first UW team in 1948 won the Pacific Coast Conference Northern Division title and came within a game of reaching the Final Four, arrived at Washington in 1946 after a baseball career that included a two-year stint (1932-33) with the New York Giants.

Allison also coached the UW football team in 1920 and later coached football at the University of California (1935-44).

Of the four men with no previous head coaching experience before Hopkins, only McLarney had a winning record.