The Seahawks have addressed an area of need by signing former San Francisco LB Michael Wilkhoite to back up Bobby Wagner and K.J. Wright. 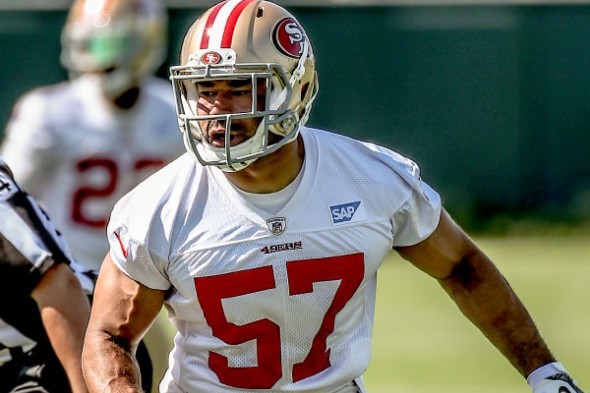 Former San Francisco starting inside LB Michael Wilhoite has agreed to sign with the Seahawks. Wilhoite, 30, would provide depth behind Bobby Wagner and/or K.J. Wright and be an upgrade over Brock Coyle, who signed with the 49ers after he was not offered a tender as a restricted free agent.

“Bobby and K.J. played thousands of plays this year between the two of them and were extremely successful,” Carroll said at his season-ending presser following the playoff loss to the Atlanta Falcons. “We need to address that. We didn’t get anybody that really made a difference in the last couple of years to really fight to take those guys’ jobs.”

Wilhoite made 34 starts over the past three seasons. He went undrafted out of Division II Washburn (KS) University and first played professionally for the Omaha Knights of the now-defunct United Football League.

Wilhoite joined the 49ers in 2012 and became a starter in 2014 when NaVorro Bowman had a knee injury. He continued to see time after Patrick Willis retired. Last year, Wilhoite made six starts, had 46 tackles, a sack, two passes defended, a forced fumble and fumble recovery.

San Francisco had the league’s last-ranked defense in opponents’ yardage and scoring, while allowing the most yards rushing in franchise history. Kyle Shanahan replaced Chip Kelly has head coach.

Garvin, 27, entered the NFL as an undrafted free agent with Pittsburgh in 2013 after playing college ball at West Virginia. In 2015, he signed with the Washington Redskins. He played sparingly last year (57 defensive snaps) on defense, but saw considerable time on special teams. Garvin is 6-foot-3 and weighs 221 pounds.