Kelsey Plum tallied 29 and Chantel Osahor added 17, but Mississippi State’s Teira McCowan blitzed Washington with 20 points in the final period to oust the Huskies from the NCAA tournament. 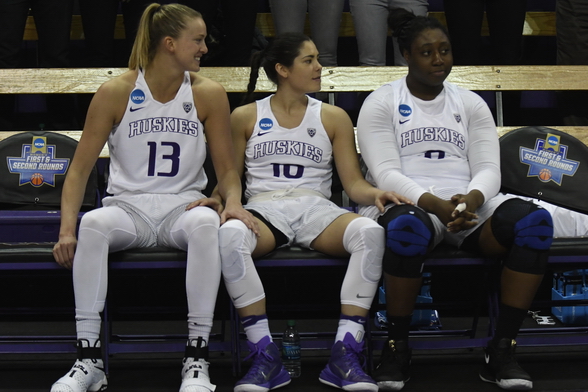 No Final Four this year for Kelsey Plum, Chantel Osahor and the University of Washington women’s basketball team.

Mississippi State’s 6-foot-7 Teaira McCowan scored 20 points and grabbed eight rebounds in the fourth quarter  — UW tallied 14 points — as the No. 2-seeded Bulldogs, who trailed by nine in the first quarter and by four late in the third quarter, rallied for a 75-64 victory over No. 3-seed Washington Friday in the Sweet Sixteen at Chesapeake Energy Arena in Oklahoma City.

Plum tallied 29 points and Osahor posted her NCAA-leading 30th double-double of the season with 17 points and 11 rebounds, but Mississippi State used its superior height and depth to wear down the Huskies.

They finished 29-6 in what was the final UW game for Plum and Osafor, the first duo from one school in NCAA history to lead in scoring and rebounding, respectively. The Bulldogs move on to the Elite Eight Sunday to face the Baylor-Louisville winner.

Washington was all over Mississippi State early, rolling to leads of 12-3 and 16-7 as Plum and freshman Aarion McDonald both hit a pair of 3-balls. In building a 20-13 lead at the end of one quarter, Plum set another national record for most free throws made in a career.

The Huskies worked their way back in the third when Plum scored to go up 47-46. When Natalie Romeo knocked down her first three for a 50-46 lead at the 1:58 mark, it looked like Washington was in control.

But Mississippi State, led by McCowan, who had a five-inch height advantage over Osahor, owned the Huskies in the final period, outscoring Washington 27-14. The Bulldogs got a majority of their points in the paint, largely due to second chances. Mississippi State finished with 49 rebounds to 34 for Washington.

The Huskies got almost nothing from anyone not named Plum and Osahor, who appeared gassed for much of the second half. Romeo and McDonald both tallied eight points and Washington collected no points off the bench.

Plum, a candidate for both the Naismith and Wade trophies, didn’t shoot well, making only 10 of 25 shots after her abysmal second quarter. She finishes with 3,527 points and 911 free throws made, both NCAA records. She scored 1,109 points this season, another NCAA mark.

McCowan, a sophomore who entered averaging just eight points per game, finished with 26 points and 12 rebounds.