The Sounders played to a 1-1 draw against Club Necaxa of Mexico’s Liga MX Saturday. The match was a chance for coach Brian Schmetzer to test some of his younger players who have not seen time in league play. 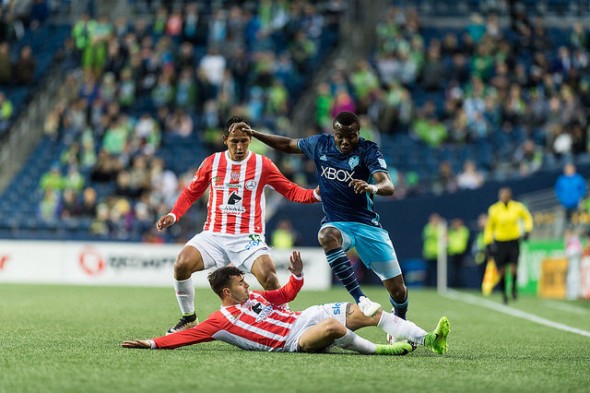 The Seattle Sounders used Saturday’s international break from MLS play to schedule a friendly against Club Necaxa from Mexico. For Sounders head coach Brian Schmetzer, the  1-1 draw at CenturyLink Field was an opportunity to get players minutes and evaluate a crop of young signees who haven’t seen much action since preseason ended.

Several rookies had their first start with the senior team. Nouhou Tolo, who played with S2, Seattle’s reserve team in the second division of the soccer pyramid last season, started at left back. Jordy Delem started opposite Tolo at right back, while homegrown player Henry Wingo was in the attack.

“I wanted to get a little bit of experience from them,” Schmetzer said. “I wanted to get self-expression. I needed Henry to get after people. Jordy Delem, I wanted him to be steady. Right back may or may not be his ultimate position, but just lock a guy down, make sure his guy didn’t do anything.”

The rest of Seattle’s roster consisted of older players still new to the team, with Gustav Svensson at center back for the second game in a row, Harry Shipp playing out on the left wing, Alvaro Fernandez in the central midfield, and Tyler Miller in goal.

So fresh was the roster that third-year defensive midfielder Cristian Roldan was given the captain’s armband, partly for his spirit, mostly because he had been with the club the longest among the starters.

The friendly at times looked like the teams took turns performing fast break drills against one another. With Necaxa also fielding a second-choice side, the teams attempted to play  usual styles while battling the miscommunication that comes from players who are unfamiliar with one another.

Tolo was a bright spot, showing speed on the left side of the field as he carried the ball up the pitch to spring counterattacks. When caught out of position, Tolo was quick to recover and minimize the risk from his far ventures downfield.

Wingo also impressed, mixing in easily with a veteran attacking group and using his speed on the right wing to stretch out Necaxa’s defense when Tolo moved into space on the left.

Other players showed the need for improvement.

It was the veterans who provided Seattle’s lone goal of the night. Harry Shipp picked off a wayward pass in the 83rd minute inside Necaxa’s defensive third and chipped the ball to Fernandez, who finished with composure into the far side of the net.

Despite playing solid defense for 89 minutes, the Sounders were caught unprepared on a fast break in the game’s final minute. A low cross from the right side found Alejandro Diaz unmarked in the penalty area. He scored down the middle of the net.

The timing of the match allows the Sounders a chance to keep a normal schedule as players return from international duty and the team prepares to host Atlanta United March 31 (7 p.m., FS1).