The abrupt renaissance of West Coast basketball, represented by two teams in the Final Four, makes more stark the decay of Washington’s program, which first may have to hit bottom under new coach Mike Hopkins. 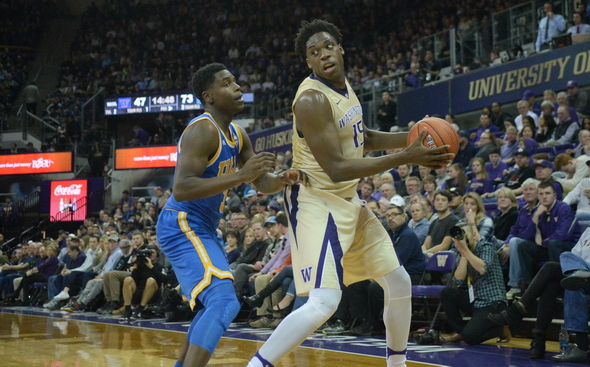 Noah Dickerson, who had a strong second half of the season, wants to leave the Huskies program after the firing of Lorenzo Romar. / Alan Chitliik, Sportspress Northwest

Put down the purple kazoos, Huskies basketball fans, and bow to the weirdness.

Not only are two of the men’s Final Four teams from the West Coast, neither of the teams is Arizona or UCLA. The ascent of Oregon and Gonzaga to hoops Valhalla in the same season not only stretches the Seattle sports mind beyond recognition, it was done when Washington hoops reached a new nadir.

While Huskies athletics director Jen Cohen is eager to fire up her that-was-then-this-is-now campaign to support new coach Mike Hopkins, the bleeding hasn’t stopped yet from the old wound, which appears to be roughly equivalent to the football team’s 0-12 record in 2008.

Apparently not as impressed as the attendees at Hopkins’s presser after his hire, players are still leaving the Huskies program. Sophomore starter Noah Dickerson and junior reserve Matthew Atewe have indicated plans to transfer from Washington.

On the recruiting front, three of the five heralded players from the 2017 recruiting class, which former coach Lorenzo Romar mistakenly believed would bullet-proof him from a firing, have de-committed.

Michael Porter Jr., the one-and-done star from Nathan Hale, and Blake Harris from North Carolina, are gone, and ESPN reported Saturday that Daejon Davis, a 6-4 guard from Seattle’s Garfield High School, requested a release from his letter of intent.

Cohen has promised to provide releases from letters of intent as long as each player first  talks with Hopkins.

Likely part of the collective thinking by the players here, and everywhere in college ball, is that they get four, three or two years, maybe just one year, for a shot at the NCAA tourney, not a six-year contract like Hopkins.

One of the more intriguing consequences of Gonzaga’s ascension is that coach Mark Few has created a different kind of one-and-done — a late-career home for good players who want to escape dead-end programs by transferring for a shot at glory.

The story of Nigel Williams-Goss’s transfer from Washington is familiar locally, and a killer reminder all season for Huskies fans over what could have been. But Few also hired two other difference-making transfers who helped push Gonzaga through four tourney wins, including Saturday’s 83-59 win over Xavier in San Jose, that punched their ticket to Phoenix.

Jordan Mathews, a 6-4 guard from Los Angeles who spent three years at Cal, and Johnathan Williams, a 6-9 forward from Memphis who spent two years at Missouri, showed up at Gonzaga in part because the Zags’ dominance of the mid-major West Coast Conference virtually assures an annual appearance in the tourney.

These players have come of age in an era where the NCAA tourney has achieved an out-sized, unique place in the national sports consciousness.

Except for the part about compensating the athletes, the tourney is a completely professionalized sports event more accessible than any other similar hype-fest, as well as perfect for mobile-device addicts.

As for the 18- to 20-year-old participants, all players believe, however misguidedly, that the tourney exposure will be a springboard to the NBA. Pro scouts these days don’t need tourney buzzer-beaters to discover talent, not when they are pulling players out of Ulan Bator, Lagos and Liepaga. But NBA teams are happy to exploit the mythology.

Gonzaga sits at the epicenter of this evolving landscape. A small, private school with no football and few other winter diversions for its fan base, it is operated by a smart, aggressive coaching staff more comfortable recruiting in Poland than Seattle.

By avoiding so far the scandals epidemic to the NCAA big time, while creating an almost automatic entry to the tourney, the Zags draw as easily from disenchanted college players as the high school circuit. The pool from which they draw is rarely the one-and-done caliber, meaning the Zags have a chance at continuity, supplemented by more mature transfers.

Down in Eugene, meanwhile, Nike U had a far different but equally successful path — the big state school abetted by the wealth of Phil Knight, who has hired, in three-time Pac-12 coach of the year Dana Altman, a coach as competent as the facilities are lavish.

The Ducks’ 74-60 dominance Saturday in Kansas City of an excellent Kansas team, a No. 1 seed that had won its first three tourney games by an average of 30 points, was arguably the shocker of the tourney. And all that despite the injury absence of key senior forward Chris Boucher.

The Ducks have had at least one win in each of the past five tourneys. The four this season provided Oregon’s first Final Four appearance since the event’s debut in 1939, a few months before Hitler moved into Poland to start World War II.

Of course, the Zags have never been to the Final Four. But to suggest either team’s arrival is a novelty act would be a serious misread of the college hoops scene.

Huskies fans can hope that the Ducks and Zags will be hurt by players pursuing the NBA.  But there’s little to suggest either program can’t reload quickly.

It’s the Huskies, after 15 years of the rise and fall of Romar, who are upon the slow rebuild. After a 9-22 season that, despite the presence of perhaps the NBA’s No. 1 draft choice, Markelle Fultz, was the worst in 23 years, the Huskies remain an open wound.

With all the defections, Hopkins may have to first endure hitting the bottom.