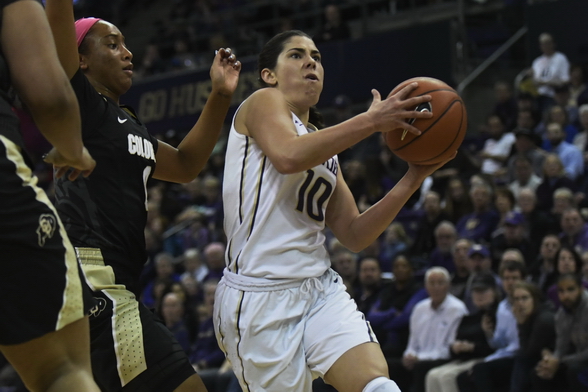 Washington’s Kelsey Plum Monday was a unanimous choice for the Associated Press women’s basketball All-America team. Plum, who led the nation in scoring this past season and broke the NCAA career scoring record, is the first from UW to make the AP first team.

Fellow UW senior Chantel Osahor, the nation’s leading rebounder, was named to the second team. Washington was the first team in NCAA history to have the national leaders in points and rebounds.

Voting took place before the NCAA Tournament, in which Washington advanced to the Sweet Sixteen before losing in a regional semifinal in Oklahoma City to Mississippi State Saturday.

Plum, also a finalist for the Naismith and Wade trophies, awarded to the Division I Player of the Year, averaged 32.6 points per game with a high of 57, a Pac-12 record, against the University of Utah Feb. 25. She scored 3,431 points, 1,013 this past season, most in NCAA history. She also made 890 free throws, another NCAA record.