Jim Hayford, who has been to nine post-season tourneys in his 18-year college basketball coaching career, will take over for the fired Cameron Dollar at Seattle University. 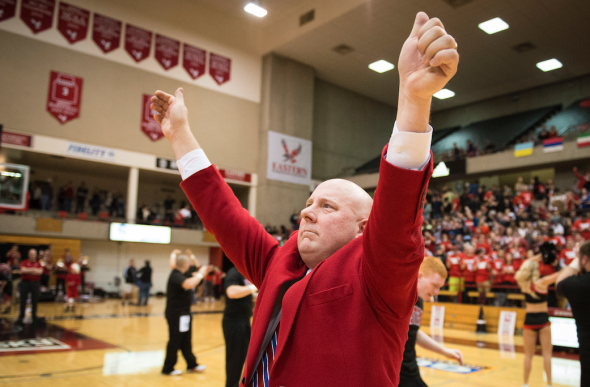 Jim Hayford had a good run at Eastern Washington of the Big Sky Conference. / Spokesman Review

Seattle University Wednesday named Jim Hayford as its men’s basketball coach, replacing Cameron Dollar, fired by the Redhawks last week. Hayford comes to Seattle U. from Eastern Washington University in Cheney, where he spent the last six years as head of the Eagles’ program.

“I am thrilled to welcome Coach Hayford and his family to Seattle University,” said athletics director Shaney Fink. “Coach Hayford has a history of success in developing programs that compete on the national level. He is a proven winner, a committed educator, and a passionate leader, and we are excited for him to bring that blueprint of success here to Seattle U.”

“It is a great honor to be asked to serve as the head basketball coach at this great Jesuit Catholic institution,” said Hayford. “I humbly move into this position with a desire to lead a championship program that graduates outstanding leaders. The history of the basketball program here is rich and unique. We will work tirelessly to build a program that will return Seattle University to the NCAA Tournament.”

“My first task at Seattle U. is to come alongside these players and get to know them while doing all I can to aide them in becoming the best players, teammates, leaders and students that they can be,” said Hayford. “I have accepted this position because I feel the potential of this program is great and can capture the devotion of basketball fans in this great city.”

Hayford earned his bachelor’s degree in social science from Azusa Pacific in 1989 and his master’s in education from Claremont Graduate School in 1991.