Gonzaga nears its shot to be ‘Duke of the West’

A national championship won’t suddenly transform Gonzaga into Duke, but it will make the Zags the closest thing to the Blue Devils that the West Coast has to offer. 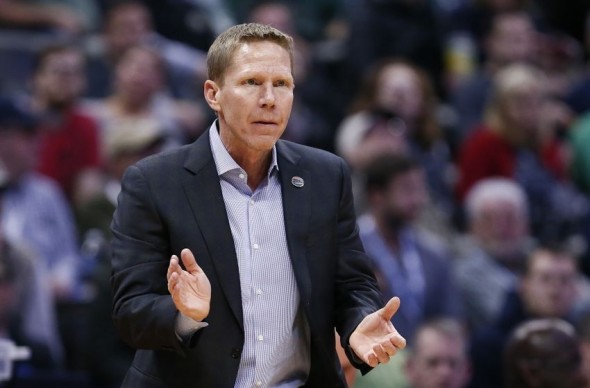 Mark Few’s Gonzaga Bulldogs finally have a real shot to win it all. / Gonzaga University

Over the past two decades, basketball pundits have pummeled Gonzaga for what they perceive as a glossy record inflated by playing outside of a major conference, as well as the school’s failure to win, or even reach, the Final Four. The Bulldogs finally are in position to claim a national championship, but the criticism will only intensify if the Zags fail to seal the deal.

If Gonzaga succeeds, head coach Mark Few will get the national credit he richly deserves for a breakthrough that could create in the West a powerhouse to rival what Duke has had for a quarter century.

A private, Protestant school in Durham, N.C., Duke has an enrollment of 6,449 students, making it a far smaller institution than Tobacco Road rivals North Carolina (28,136) and North Carolina State (30,130). Despite its enrollment, the Blue Devils have won five NCAA titles, appeared in 11 championship games, 16 Final Fours and made 20 trips to the Elite Eight, almost all of that success coming during the tenure of head coach Mike Krzyzewski.

In 2008, ESPN.com rightly anointed Duke the most prestigious college basketball program in the country since the 1985-86 season (when the field expanded to 64 teams). It said,  “By any measure of success, Duke is king of the hill in college basketball in the 64-team era of the NCAA tournament.”

Since that designation, Duke has added two more national titles (2010 and 2015).

A private Jesuit college in Spokane with an enrollment of 7,572, Gonzaga’s NCAA Tournament record pales next to Duke’s, especially considering the difference in competition between the Atlantic Coast and West Coast conferences and Duke’s exemplary postseason record.

But Few has transformed Gonzaga into a destination program with 18 consecutive NCAA Tournament appearances under his watch (19 overall), including eight that reached the Sweet Sixteen, two that made it to the regional finals, and now this year’s national semifinals.

Few has 26 NCAA tournament wins, but for perhaps the first time in his tenure, a championship Monday night in Glendale, AZ., wouldn’t constitute an upset. This is Few’s best team. The Bulldogs have 29 double-digit wins with victories over the Pac-12 and Big 12 tournament champions, plus the Summit League and MAC regular-season champions. Gonzaga also has seven top-25 RPI wins and seven against top-25 programs.

“We scrimmaged Gonzaga every year for 10 years while I was the coach at Texas and, I’m telling you, this is the best team, by far, that Mark has ever had,”  Tennessee’s Rick Barnes told CBSSports.com earlier this week (Barnes is the only coach in America who faced Gonzaga, North Carolina, South Carolina and Oregon this season).

“They’re good at every position. And when Few goes to the bench he’s got some depth. Gonzaga has more talent than Mark’s ever had. And they’ve done a great job of coming together.”

A recent national trend also favors the Zags. The last two NCAA champions were both small private schools, Duke in 2015 and Villanova, with 8,100 students in suburban Philadelphia, last year.

Since the UCLA dynasty under John Wooden ended in 1975, the national championship has been won by a school with an enrollment of fewer than 10,000 students eight times, first by Marquette in 1977, five times by Duke (1991, 1992, 2001, 2010, 2015) and twice by Villanova, all private schools. Over the same span, and excluding Duke, the following private schools with enrollments under 10,000 have reached the Final Four:

In addition to Duke’s titles, Marquette (1977) and Villanova (1985, 2016) won championships, so a victory by Few and the Bulldogs would make Gonzaga the second-smallest school by enrollment to win in the post-Wooden era. The Zags are also the first Northwest school in the Final Four since Oregon State, behind Mel Counts and Terry Baker, in 1963.

Remarkable is that most people didn’t figure Gonzaga to be a special team this year after it lost Kevin Wiltjer and Domantas Sabonis to the NBA after going 28-8 last season and reaching the Sweet Sixteen as a No. 11 seed. But the Bulldogs are solid favorites over South Carolina in the national semis Saturday (3:09 p.m. PT, CBS).

Beyond his string of conference titles, most impressive about Few is how he consistently and creatively constructs rosters capable of making deep tourney runs despite having to lure players from all over the country and, indeed, all over the globe, to his Spokane outpost.

This batch of Zags features only one player from the state of Washington (backup guard Rem Bakamus), but includes players from Poland, Japan, Denmark and France, plus three key players who “downsized” via transfer in order to get a shot at a championship.

Former University of Washington guard Nigel Williams-Goss transferred to Gonzaga two years ago precisely for this weekend’s opportunity, as well to substantially enhance his game during his redshirt season. Few even showed Williams-Goss two examples of how that would be accomplished.

After redshirting in 2011-12, Kelly Olynyk advanced from a non-descript backup to a first-team All-America and NBA lottery pick. That enabled Gonzaga the following season land Kentucky transfer Kyle Wiltjer, who evolved from a one-dimensional shooter into an elite scorer.

“That was a huge factor,” Williams-Goss told Yahoo News. “Their redshirt plan for me was second to none compared to all the other schools I was looking at. I feel like they had a very deliberate plan from day one, as far as what I was going to work on during my redshirt year. The success they had with Kelly and Kyle was a huge part of why I came to Gonzaga.”

Tuesday, Williams-Goss made the Associated Press All-America second team. In a Wooden Award-type season, he is Gonzaga’s leading scorer at 16.7 points per game. Fleeing Washington was the best career move he could have made.

Starters Jordan Mathews (10.7 ppg) transferred from California to play his senior year, and Johnathan Williams III (10.3 ppg) bolted Missouri to play his final two seasons under Few, who can offer such players an inducement most big state schools cannot: A virtual guarantee of 25-30 wins every season (Few has never had a sub-20-win season) and almost always the WCC’s automatic berth in the tourney that goes to the league champion.

Washington can’t even guarantee a .500 season – even with the probable first pick in the NBA draft.

“What’s important to me,” Few told the Washington Post in February, “is that we’ve been nationally relevant every year for 20 years now. I think that’s pretty good.”

Few’s recruiting leverage will only increase if he wins a championship. That won’t immediately transform Gonzaga into Duke, but Gonzaga will be the closest thing to it west of the Mississippi – if it isn’t already.

History is written!!! Couldn’t be happier for the Zags and their first trip to the final four. See you guys in Phoenix @ZagMBB #ZagUp pic.twitter.com/CgiTdYDCGl