Sounders have a rival, Atlanta, for 1st-year glory 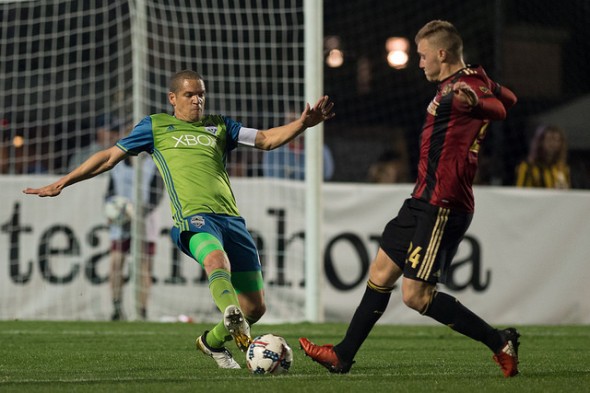 The Sounders and Atlanta United are two of the league’s most visible franchises. / Zach Blend, Seattle Sounders FC

When the Seattle Sounders host expansion franchise Atlanta United at CenturyLink Field Friday (7 p.m., FS1), they will glimpse a bit of their early selves. The Sounders are kings of the hill, but Atlanta United has quickly become one of the most popular new kids in school with cool uniforms, throngs of fans and deep pockets.

Comparisons between the clubs’ expansion seasons have been frequent, even before Atlanta (2-1-0) played its first match. Eight years ago, Seattle was the hot new thing on the American soccer scene, smashing league attendance records and developing an attractive brand of soccer, thanks in part to a financial partnership with the Seahawks.

Atlanta United is owned by Falcons owner Arthur Blank. It will be the first team to play in the $1.6 billion Mercedes-Benz Stadium when it opens later in the summer as home for both sports. Already they have drawn a total of 101,219 in two games in the 55,000-seat temp home at Bobby Dodd Stadium downtown, the home field for Georgia Tech football.

The front office hasn’t been afraid to spend big in the hope of quickly gaining attention and winning over the notoriously fickle Atlanta sports fans.

The club hired Gerardo “Tata” Martinez to helm its inaugural season. Martinez last coached the Argentina national team. Before that, he was at Barcelona.

Money has been spent on the player side too.

Atlanta paid $8 million to acquire 23-year-old midfielder Miguel Almiron from Club Atletico Lanus in Argentina as a designated player. Another $2.67 million went to Argentina’s San Lorenzo for the services of Hector Villalba, while $4.81 million was spent buying Josef Martinez, who leads the league with five goals in three games, from Torino in Italy.

Sounders coach Brian Schmetzer, who coached the Sounders in their final season before joining MLS and helped the club enter the top level of American soccer, recognizes the similarities.

“I think they probably spent more money than we did,” Schmetzer said Thursday. “But if you’re talking about player selection, coaching selection, two top-notch coaches (in Martinez and former Sounders coach Sigi Schmid), the fact that they’re drawing big crowds in a big stadium — there’s a lot of similarities.

“It is a special event. It’s a new team. You want to impose your will early. This is a little bit of a different expansion team. They brought it up a notch, so for me, it’s another game against a very good soccer team.”

Seattle (1-1-1) has a history of success taking on expansion franchises. In six meetings with new clubs, the Sounders are 3-1-2, the lone loss a 2012 drubbing on the road against the Montreal Impact.

Still, Atlanta United may seriously challenge the Sounders, who were just rejoined by Clint Dempsey, Jordan Morris, Nico Lodeiro, Roman Torres and Joevin Jones after all finished international duty. Schmetzer said that all were available for Friday’s roster, but only Lodeiro, who did not play with the Uruguayan national team, fully participated in practice Thursday.

Atlanta won a meaningless preseason scrimmage against Seattle in South Carolina. Those games did not feature first-team players for long stretches of the match. This time, both hope to go full strength, though Atlanta will lack Martinez, out four to six weeks with a quad injury.

Bragging rights are at stake in the eternal quest to be at the top of the superlative chart of “latest” and “greatest.” The highly visible and popular franchises in lucrative markets offer an early-season sign of American soccer’s potential.