The Mariners decided to keep one reserve outfielder, Guillermo Heredia, and one reserve infielder, Taylor Motter, as they cut the roster to 25 ahead of Monday’s opener. Five pitchers are on the DL. 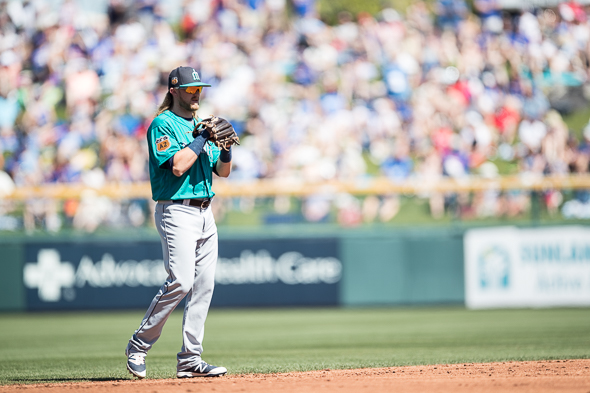 Taylor Motter made the team as a reserve infielder-outfielder. / Drew McKenzie, Sportspress Northwest

The Mariners reached their 25-man roster Friday by anointing Guillermo Heredia over Ben Gamel as the fourth outfielder and deciding to keep eight relievers, including lefties Dillon Overton and James Pazos. Also new to the pen this year are RHP Casey Fien and LHP Mark Rzepcyznski.

His spot was taken by Ariel Miranda, who had been sent to AAA Tacoma after a poor spring.

Beyond the Smyly injury, which was a blow, none of the maneuvers was a surprise, at least since 1B Dan Vogelbach was sent down to Tacoma last week. He was scheduled to platoon with Danny Valencia at first base.

Motter, 28, who had 80 at-bats in 33 games last season in Tampa, was the key figure in shaping the roster. His ability to play each infield spot and help in the outfield corners  allowed the Mariners to carry one position bench player besides catcher, which made room to carry an eighth reliever.

Given the potential early return to health of several relievers, the pen will be in flux for awhile behind Edwin Diaz as closer and Dan Altavilla as eighth-inning set-up man. Also, Overton won’t be available for the first three games as his wife is due to deliver a baby.

The Mariners open their 40th anniversary season at 5:10 p.m. PT Monday in Houston, the first of seven road games before the home opener at 2:10 p.m. April 10 against the Astros.