A second-choice, emergency back line held expansion franchise Atlanta United to its first goal-less night of the season, but a lack of offensive conversion cost the Sounders three points at home Friday. 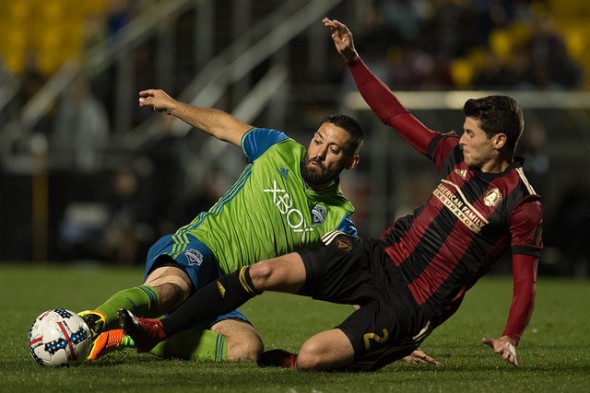 The Seattle Sounders held expansion Atlanta United scoreless for the first time in the new club’s history at CenturyLink Field Friday night, finishing with a 0-0 draw despite fielding three second-choice players in its back line. Substitutes Clint Dempsey and Will Bruin each created promising scoring opportunities, but neither converted.

Twenty minutes before the opening whistle, the game grew complicated for Seattle (1-1-2), when center back Chad Marshall was deemed unable to play due to a stomach illness.

In his place, second-year player Tony Alfaro made his second career MLS start alongside Gustav Svensson, starting at center back while Roman Torres recovered from international duty. Jordy Delem, 24, made his senior team debut at right back because Brad Evans is nursing a calf injury and Oniel Fisher is recovering from a pulled hamstring.

Sounders coach Brian Schmetzer said he had confidence in his backups.

“Three out of that back four played against Necaxa, so I had no issues, no drama,” Schmetzer said. “They stepped in and played well. Next guy up.”

Still, the use of so inexperienced a unit against an Atlanta (2-1-1) team that boasts the best goal differential in MLS affected Seattle’s attack. Defensive midfielder Osvaldo Alonso stayed much further back to help negate the threat of a counter-attack headed by Hector Villalba, while Cristian Roldan seemed less bold in his downfield expeditions.

At the 57-minute mark, Schmetzer subbed on Dempsey, looking to spark more effort in the attacking end. With four goals in two games for the national team, Schmetzer hoped that Dempsey’s hot streak would put Seattle over the top.

Dempsey nearly scored a minute later, when he jumped to meet a free kick and headed the ball off the right post before it was cleared away.

Despite the miss, the Sounders changed with Dempsey on the field. His presence opened more lanes as Seattle brought the ball up the pitch, and several times he slid perfect passes into space for his teammates as they sprinted through defensive gaps.

Dempsey’s miss was the best chance until stoppage time, when Schmetzer added forward Will Bruin to try to batter in a goal in the first minute. Less than 60 seconds after entering, Bruin was on the end of a cross from Roldan, set up by a Dempsey back-heel pass, but could not direct the ball into a wide-open net.

Both moments were telling of the Sounders, who managed to direct one of 13 shots on target.

Schmetzer was pleased with the effort from his veteran substitutes, but acknowledged the need for better production from a team that swung in 29 crosses against nine from Atlanta.

“Maybe it’s the final pass, maybe it’s just a little bit of luck,” Schmetzer said. “Clint comes in, his first touch was off the post. We’ve got to do a better job as coaches to get them to feel confident in front of goal. There were some guys that were a little hesitant to pull the trigger. We can’t micromanage what they do because they’re such talented guys, but we need to get a few more shots on target.”

The draw was the third in Seattle’s history playing expansion teams for the first time, giving them a 3-3-1 record. A draw with a back-up back line against the Eastern Conference leaders is not a bad result for Seattle, but a lack scoring chances let a home win get away.