Gonzaga’s skill in international recruiting has been a great asset in getting the program to the national championship game. New Washington coach Mike Hopkins needs to get on plane to Europe. 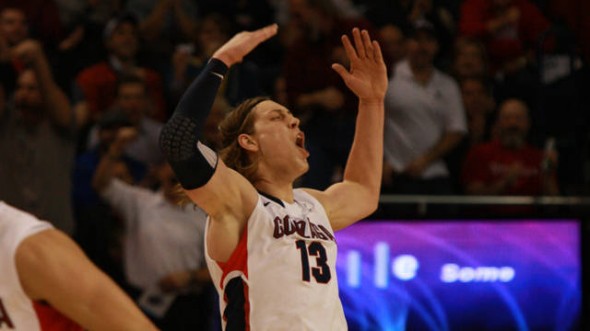 Kelly Olynyk, from Kamloops, B.C.,  has been a regular for the Boston Celtics in his four years since graduating from Gonzaga, where he starred. / Gonzaga athletics

Lost in the dissections of new University of Washington coach Mike Hopkins’s career resume was that he was “court coach” for USA Basketball teams at the 2010 FIBA World Championships, 2012 London Olympics, 2014 World Cup and 2016 Rio Olympics. He might need a bandage on his passport.

That doesn’t mean he necessarily knows a lot of tall 16-year-old Finns, muscular 17-year-old Serbians or swift 18-year-old Nigerians. But he better put more hard miles on that passport quickly, because foreign players are becoming bigger factors in the big-time college basketball industry.

Here’s one lesson from this year’s Final Four that isn’t detectable from the box scores: Home nations for non-U.S. roster players.

Apparently, when a school has been to a record 20 Final Fours and won four championships, it’s possible to throw open the doors and hire the first guys who best block the most light in the doorway.

The Tar Heels are an exception. Most schools on the come — everyone but the Tar Heels and Kentucky — find increasing success by going after internationals.

Nobody does it better than the Zags with assistant coach Tommy Lloyd, the guy most  responsible bringing Przmek Karnowski (Poland), Domantas Sabonis (Lithuania), Rony Turiaf (France) and Canadians Kevin Pangos, Kelly Olynyk and Robert Sacre, among many others.

Even though a growing number of bandwagon fans in Washington are taking some reflected pride in the success of Gonzaga, which plays the Tar Heels at 6 p.m. Monday (CBS) for the national championship, it’s not as if the Bulldogs are mining the state’s hoops talent. The Zags belong to the world.

The only player from Washington is walk-on, fifth-year senior Rem Bakamus from Mark Morris HS in Longview, who almost never plays. He’s the guy in the man-bun greeting teammates along the bench with all kinds of gymnastic handshakes.

The Bulldogs have had a few from Western Washington, most recently Gary Bell from Kentridge High in Kent, a two-year starter who graduated in 2015. But the Zags, with a big budget, growing reputation and no football program to feed, can afford to go long.

A roster’s geography is increasingly less meaningful to success in college loops — as long as a school is willing to cover a lot of it in recruiting. Exploiting the overseas niche isn’t the only or even the main reason for the school being on the cusp of the state’s first national championship in the sport. But it is a way a little Jesuit school in the Inland Empire can make a national mark completely out-sized to its stature and location.

Recruiting internationally in college hoops has been a fixture for decades. The Huskies’ best success prior to the 15-year era of Lorenzo Romar came in the mid-1980s with two imports from Germany, 6-10 Detlef Schrempf and 7-0 Christian Welp, were brought to Montlake by coach Marv Harshman.

The Huskies have had some success with other foreigners, from Peter Gudmundsson (Iceland) to Matthew Bryan-Amaning (England), but most have been merely serviceable, not difference-makers, sort of like Malik Dime of Senegal this season.

But the talent and its availability are increasing. A Fox Sports story early in the season reported that internationals occupy 11 percent of Division I roster spots and the number of foreign-borns is up 40 percent over 10 years.

The story cited three primary reasons: Access to players has increased thanks to the internet and increasing global TV coverage; salaries in European professional leagues are drying up; and the exposure to the NBA that big-time college programs provide makes going to school in the U.S. more compelling. Whether the Trump administration sees that as a threat to U.S. security remains to be seen.

At Washington, Romar did a fair bit of international recruiting, but he had to spend a lot of time in the greater Seattle area because it was a target-rich environment. It didn’t help that he came in second on a local of local talent. Although he sent numerous players to the NBA, even he admitted in an interview with KJR radio on the day of his firing that he failed to back up the premier players with adequate help.

Given the program’s desertions that have accompanied Romar’s firing — Garfield High School’s 6-4 guard Daejon Davis, released from his letter by Washington, tweeted Saturday that he was headed to Stanford — Hopkins has a grim road ahead of him, at least short-term.

Even optimistic hoops fans understand that Hopkins, despite his considerable reputation as a recruiter, is at least a half-dozen years or more away from getting respectable with Gonzaga, especially after the bump the Zags will get from this year’s tourney success.

But he has to start somewhere. And these days, the Avenue de Champs-Élysées and downtown Kamloops are nearly as important to recruiting as Garfield on 23rd Avenue South.