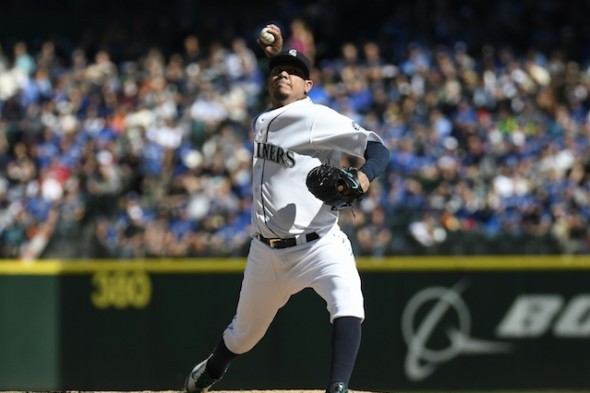 The Mariners launched their 40th anniversary season with an inglorious thud, falling to the Houston Astros 3-0 Monday night at Minute Maid Park (box). Starter Felix Hernandez allowed two early home runs, lasted only five innings, and had no offense of consequence behind him as Seattle, bewildered by Dallas Keuchel, lost on Opening Day for the second consecutive season after winning nine openers in a row from 2008-15.

After CF George Springer hit a home run to left on Hernandez’s fourth pitch of the game, Houston SS Carlos Correa came back in the fourth with a 449-foot bomb over the left-field foul pole for a 2-0 lead. Correa added a sacrifice fly in the sixth.

Keuchel squelched the Mariners on two hits over seven innings, fanning four and walking two. The hits were by newcomer SS Jean Segura, a single to center in the first and a single by 2B Robinson Cano in the fourth . . . Segura (2-for-4) added an infield single off reliever Luke Gregerson in the eighth . . . The Mariners had two decent scoring opportunities. They loaded the bases in the fourth, but CF Leonys Martin grounded out to end the inning, and had runners on second and third with two down in the eighth. But Cano flew out to right . . . The Mariners went 0-for-4 with runners in scoring position and stranded seven.

Making his 10th Opening Day start (one of nine pitchers in MLB history to make that many with one franchise), Hernandez worked five innings, allowing two runs on five hits with six strikeouts and no walks. He threw 69 pitches, 47 for strikes, and allowed the two home runs before departing with a groin strain he sustained in the fourth inning while covering first base on a ground ball . . . After winning six Opening Day starts, Hernandez has lost his past two . . . Relievers Nick Vincent, James Pazos and Casey Fien combined for three innings of scoreless relief..

“Right now I think Felix is going to be fine to make his next start. He had great stuff tonight. He made a couple of mistakes, but he was sharp except for that. Keuchel was outstanding. It was just not our night, but we’ll be fine,” — Mariners manager Scott Servais

“I’ll be okay. For sure, I’ll be there for my next start. I made a mistake to Springer, but the home run to Correa was a good pitch. He just had a good swing.” — Hernandez