After title loss, much pain for Gonzaga’s star

Nigel Williams-Goss tried to play through an ankle he sprained with 1:25 to play, but had no lift on two missed jumpers. After the 71-65 loss to North Carolina, he was inconsolable. 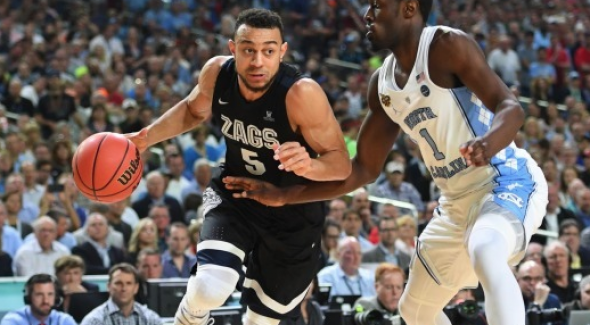 Nigel Williams-Goss led the Zags with 15 points but hurt his right ankle late in the NCAA title game. / Gonzaga athletics

GLENDALE, AZ. — Rem Bakamus is a walk-on senior guard from Longview who scored one point all season for Gonzaga and didn’t play in Monday night’s NCAA championship game. But he had a role after the game.

Bakamus put his arm around Bulldogs star guard Nigel Williams-Goss and helped him off the court when he perhaps was too distraught to make it himself. Williams-Goss was an emotional wreck after Gonzaga came oh-so-close to a first national title before losing 71-65 to North Carolina at University of Phoenix Stadium.

“I’ve just been with him for the last 10 minutes trying to console him,’’ coach Mark Few said after the game.

Williams-Goss looked ready to lead the Bulldogs to the championship when he scored eight points in a row for a 65-63 lead with 1:53 remaining. Quickly, everything changed.

Williams-Goss rolled his right ankle and went down. During a timeout, he was in obvious pain, attempting run off the pain. He stayed in the game but couldn’t elevate on a pair of missed jumpers in the final 90 seconds that could have made the difference.

Far more than just the ankle hurt when Williams-Goss reached the locker room. The transfer from the University of Washington scored a team-high 15 points and made the Final Four all-tournament team, but was overcome with tears.

“He was very emotional,’’ said 7-foot freshman center Zach Collins. “Nigel put a lot of this on his shoulders because he’s a leader and he doesn’t want us to feel like we lost the game, so he puts it on himself . . . It goes without saying that if it were not for him, we would not be here.’’

Williams-Goss wasn’t the only Gonzaga player putting it on himself. Collins, who also made the all-tournament team and had nine points and seven rebounds, fouled out with 5:03 remaining after playing just 14 minutes.

Yes, some of the fouls called on Collins were dubious. He said the fourth one, when he barely made contact while trying to get position in the paint, was a surprising call. But he didn’t want to make excuses.

“I got to stop fouling so much. My fouls caused us not to play our regular lineups like we usually do,’’ Collins said. “You got to think that if I didn’t foul that much we have a better chance of winning the game.’’

Also pointing the finger at himself was guard Josh Perkins. He scored 13 points in the first half, when the Bulldogs led 35-32, but didn’t score after intermission.

“In the second half, I didn’t do enough,’’ Perkins said.

The refs, however, did plenty in the second half. They called 27 fouls, 44 for the game, split evenly.

Perkins was dismayed at some of the calls that went against Collins, who departed with 5:03 left and Gonzaga down 59-57.

“I told him on the way out (after the fifth foul), ‘We want to win this one for you,’’’ Perkins said. “It was unfortunate. He got a lot of calls, some them I don’t agree with.’’

Still, during an ugly game in which the Bulldogs shot 33.9 percent and the Tar Heels 35.6 percent, Williams-Goss provided a spark. A three-pointer that started his eight-point run put Gonzaga up 60-59.

Williams-Goss concluded his spurt with a jumper for a 65-63 lead with 1:53 left. Then, after North Carolina forward Justin Jackson made a jumper and converted a three-point play for a 66-65 lead, Williams-Goss sprained his ankle with 1:25 left.

He was short on a jumper with 1:19 remaining when he couldn’t get much lift. Then, with 16 seconds left and the Bulldogs down 68-65, a running jumper in the lane was blocked by Kennedy Meeks, leading to a game-clinching dunk by Jackson.

Perhaps if he was not hurt, Williams-Goss, who scored 23 points in a semifinal win over South Carolina, would have been hoisting the Most Outstanding Player trophy. Instead, it went to Tar Heels guard Joel Berry II, who scored a game-high 22 points Monday after shooting 2-for-14 in the semifinal win over Oregon.

Still, Williams-Goss he could see the big picture. The Bulldogs (37-2) made it to the Final Four for the first time in school history. Few told his players they should be proud to have come within 1½ minutes of a national title.

Others saw the bright side too.

“We had a great run,’’ said forward Johnathan Williams. “We made it to the Final Four. That’s a blessing.’’

Still, Perkins wasn’t ready to hail the season. Asked whether he might eventually feel good about it, he said, “You have to ask me in a couple of days.’’

The Bulldogs will lose two senior starters in Karnowski and guard Jordan Mathews. Collins also is a draft candidate as a freshman, some scouts saying he is a lottery pick. Collins wouldn’t comment after the game on that.

Williams-Goss also could leave for the NBA. Or he can come back with the goal of nobody again needing to help him off the court.