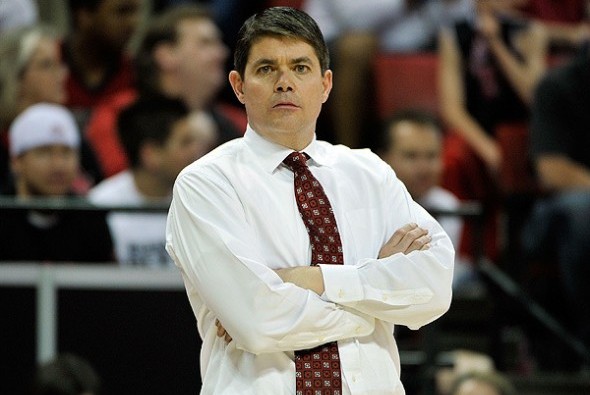 New University of Washington head basketball coach Mike Hopkins Tuesday named Dave Rice as the third and final assistant on his staff. Rice, a former head coach at UNLV and most recently an assistant at the University of Nevada, will join Will Conroy and Cameron Dollar as Hopkins’ top aides.

“Dave is a proven winner,” said Hopkins. “He has extensive coaching experience, not only as an assistant but as a head coach as well, and will be a huge asset to our program. Everywhere he has been has seen unprecedented success and he has also had a huge impact on the student-athletes he has worked with both on and off the court.

“He’s succeeded at a high level and has seen first-hand what it takes to put together a strong group that can make a run in the postseason. We’re thrilled to have him on staff and know that he will fit into the Husky family immediately.”

“I have tremendous respect for Coach Hopkins,” said Rice. “He is a terrific basketball coach and it’s evident that he makes a significant difference in the lives of his players both on and off the court. There is a great tradition at the University of Washington and I’m excited to be a part of this staff to build upon that history.”

Prior to joining Nevada, Rice spent four  seasons as head coach at UNLV, where he led the Runnin’ Rebels to NCAA Tournament appearances in 2012 and 2013, He is the third-winningest coach in UNLV history behind Jerry Tarkanian and Lon Kruger. UNLV won 20 or more games in three of his five seasons. During that time, Rice’s teams had 10 wins over Top-25 opponents, including an upset of No. 1 North Carolina.

Rice played two seasons at UNLV (1989-91) as a reserve guard for Hall of Fame coach Tarkanian and two seasons at Mt. San Antonio College (1987-89). He earned a bachelor’s degree in political science at UNLV in 1991 and a master’s in business administration in 1993.