GM John Schneider refuses to take the nuclear option (a trade) off the table in order to coax back Richard Sherman. His brother, Branton, thinks Richard loves all the attention. 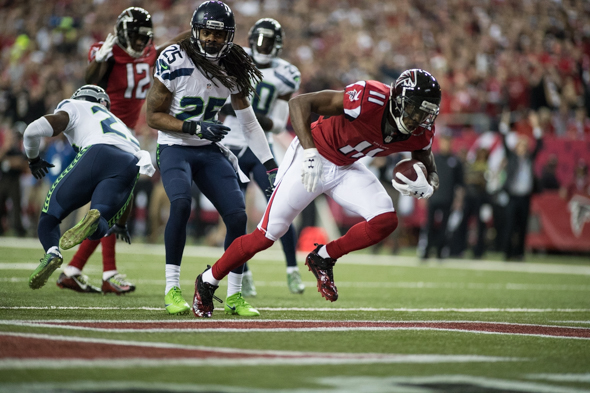 Richard Sherman (25) had his hands full in the Atlanta playoff game against Julio Jones, who scored a touchdown. / Drew McKenzie, Sportspress Northwest

After he skipped his usual mid-week podium media session at Seahawks headquarters Dec. 28, CB Richard Sherman took some questions from reporters gathered around his locker at VMAC headquarters. Coach Pete Carroll earlier confirmed that an unplanned team meeting was held the previous week in part to address Sherman’s sideline tantrum during the Rams game that became national news.

Sherman was cordial and a little nervous, as well as vague when he was asked about the meeting.

“It was good,” Sherman said. “Just talked about the mood of the team, guys coming together. We have a kumbaya meeting just about every year. Just the same thing.”

He was asked about whether he planned to resume his weekly podium sessions, which until recently gave him a national forum to expound in his usual thoughtful, often amusing, way on league controversies and social issues, as well as dressing up as Harry Potter before Halloween.

“I’ll think about it,” he said. “It’s a privilege. Not everybody appreciates it. It’s a privilege (to have me) standing up there. You’re gonna miss me when I’m gone.”

Afterward, we witnesses debated a bit whether we felt privileged (the answer was no) and what his meaning was about being gone: Was something up regarding his future, or was he merely ruminating about retirement way down the road?

It wasn’t clear. But the Seahawks’ intentions became clearer Wednesday — get with the program, Sherm, or get gone.

During an interview on ESPN 710’s Brock and Salk show Wednesday morning, general manager John Schneider passed up the chance — again — to knock down rumors last month ahead of the scouting combine that the Seahawks have entertained trade offers for for their Pro Bowl defender.

“What you’ve seen lately in the news is real,” Schneider said. “That’s on both sides.’’

Schneider elaborated in a manner unusually candid for him, and GMs generally, regarding a player’s status.

“We have open lines of communication between our coaching staff and our player personnel staff. It goes through player development, it goes through our sports science group. There’s a lot going on there.”

Schneider’s bluntness appeared to send a rare public signal to a player that the Seahawks will move him if they don’t see a commitment to avoid what Carroll recently called “self-inflicted” damage to his relationships with bosses and teammates.

In fact, the main audience for the public signal probably was teammates and others close to Sherman who value him as a talent and a person.

And it also conveniently serves to fuel the marketplace for Sherman, should Schneider and Carroll decide on the nuclear option.

Separately Wednesday, in an interview with NFL.com, Sherman’s older brother, Branton, who is also the business manager for the Richard Sherman Family Foundation, suggested that the latest round of drama may be a good thing.

“This is something that’s going to play positive on both ends — on the organization that is trying to regain its power, and on Richard,” he said. “They’re making it seem like they don’t need him. This is the same player that everyone doubted and denied, saying he’s too tall, too slow, his hips aren’t good enough, fifth-rounder. This is a new chip Richard is going to use.

“He’s going to be like, ‘You think you can trade me? I’m going to show you guys. That you would even talk about trading me . . . ‘ This is a new obstacle, mentally.”

Branton Sherman offered up something more telling, saying his brother told him, “I love this (expletive),” meaning the national attention and the doubts about him, which feeds his appetite for disrespect that has been his lifeblood.

Branton also said Richard has not lost sight of the good thing he has going in Seattle.

“He doesn’t want to leave behind that brotherhood,” Branton said. But if a trade is accepted, “That’s whatever it is. It’s a business deal.”

What does all this mean?

For Seattle as a sports city, a trade would not be on the same level as the Mariners’ 2000 trade of Ken Griffey Jr., but it would be right there with 1994 near-trade of Shawn Kemp (to the Bulls for Scottie Pippen) and the Mariners’ 1998 trade of Randy Johnson: Dealing rare, once-a-decade talents in their prime. A high-risk maneuver that will become a franchise turning point, one way or the other.

For the Seahawks, it would be getting rid of a franchise cornerstone while Super Bowl contention remains serious, and a savings of $23 million over the next two seasons. For a year at least, no rookie cornerback, no matter how gifted, could replicate Sherman’s value to the Legion of Boom. And no veteran corner could be acquired who would assimilate quickly into the Seahawks’ persnickety pass-coverage demands.

For Sherman, it would be leaving friends, steady success and a defined role for uncertainty. He would enjoy the challenge, but whether teammates and coaches who didn’t grow with him would be as tolerant of Sherman’s incessant need to be right is an open question.

As Charles de Gaulle once said, the graveyard is full of indispensable men.

Schneider sounded doubtful a deal would get done. Then again, why would he say otherwise, and risk Sherman’s irreversible alienation that would lower his market value?

“I don’t know if anything would ever happen,’’ Schneider said. Unfortunately, he was not asked whether he had a specific requirement for Sherman to meet regarding the team.

Any team punishment for Sherman’s 2016 in-game tirades, or his castigation of a member of the media, has not been made public. Somehow, “Don’t do that crap again,” seems a little flimsy, as it would to any eight-year-old who recklessly broke a window.

In December, when asked whether he had been punished, Sherman answered with his own questions.

“Did you see me get punished?”

“Did you ask the coach?”

He said it was internal.

Subsequently, no diminishment of Sherman’s play in the season’s final three games was obvious. Just as obviously, no settlement has been reached in the off-season.

Branton Sherman did offer one element of his brother’s game that Sherman needs to re-acquire.

“The first three years, that grittiness level was way up there,” Branton said. “There was no patting (opponents) on the butt on the field. But when the years got on, he got to know guys, they started hanging out, going to the same events . . .  it changed.

“Now, you can be nice off the field. But once you get back on the field, it’s, ‘I don’t know you no more.’ I hope this brings him back to that gritty play. Let’s hope he gets back to that level.”

There’s lots of psychodrama going on here, but it’s also as simple as a game of chicken. The Seahawks want Sherman back, but not at the cost of running off the rails, which is where Sherman took them last season.