If it’s true that Richard Sherman asked for a trade, something must have gone down between him and Pete Carroll that was too much even for the tolerant Seahawks coach to accept. 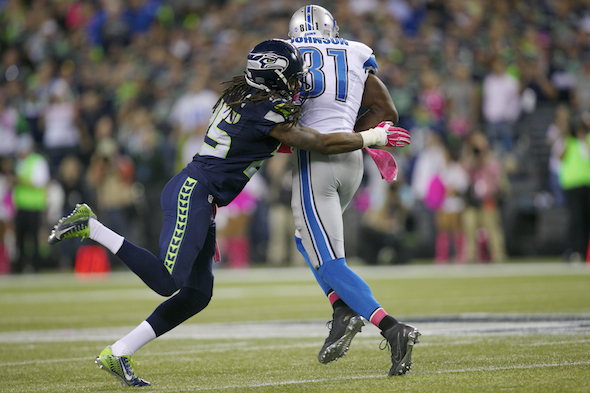 In the unfolding saga of the Seahawks’ potential trade of CB Richard Sherman, it appears that the stage has been reached where we can ask him the much-memed question he asked of QB Tom Brady on the Clink field in 2012 after Seattle beat the New England Patriots 24-23:

The question seems well-timed after Friday’s news from ESPN’s Adam Schefter, who without saying he spoke to Sherman, said,  “It has been my understanding all along that Richard Sherman was the one who initiated this. He was the one that wanted to be traded initially. The Seahawks were obliging him and his request.”

That indirectly corroborates what ESPN 710 reported March 30 as a statement from  Sherman: “I wouldn’t want to leave this city and my guys, but I understand it’s a business and organizational philosophies change.”

The Seahawks changed philosophies? That certainly is news. In terms of managing players, personnel decisions and coaching strategy, the Seahawks, since the 2010 arrivals of coach Pete Carroll and GM John Schneider, have been remarkably consistent, and have the results to back it.

They’ve made their mistakes, yet have been flexible when circumstances demanded — see the pass-heavy emphasis the second half of 2015 that pushed them into the playoffs after a 2-4 start — and generally have navigated their highly scrutinized world with a minimum of disasters.

Yes, the Seahawks did ask Sherman in 2016 to travel more with the opponent’s top receiver, as opposed to shutting down his left side of the field. But not once did Sherman lament the chance to go one-on-one with the best. He seemed to relish it.

Maybe the Seahawks do plan a course change in 2017. But absent evidence, what seems to have changed in the relationship is not the Seahawks but Sherman.

His two in-game outbursts toward coaches, which put him on the edge of insubordination, have been well chronicled. As has his distance from the local media, with whom he dealt regularly and benignly for his career until halfway through last year, when he also developed knee soreness that went undisclosed until after the season. But he never missed a game.

Something has gone awry.

Carroll has yet to speak on what he thinks might have tipped the balance toward pursuing a trade of such a valuable player his prime. For competitive reasons, he certainly wouldn’t divulge any aspect of Sherman’s play that was in decline, such as what was described here in MMQB.

But Carroll did describe the outcome of the breach in a telling way during a group interview in Indianapolis last month at the scouting combine that has been overlooked in the analysis of one of the NFL’s biggest off-season stories.

“The only thing that happened is he just didn’t come back to us,” Carroll said. “He didn’t re-set as he has. He’s always found his way to re-set.”

However Carroll defines a re-set, its absence is a big deal when Carroll depends on his leaders to help get young players to buy in. If Sherman has changed in ways that preclude a buy-in, then the Seahawks have little choice.

That doesn’t mean Sherman, 29, can’t re-set. The Seahawks have him for two more contract years, and there’s been no indication that the $23 million remaining on his deal isn’t enough. And Seattle could determine that the offers for Sherman were inadequate.

But his value isn’t going to get higher, and the draft April 27 is so loaded with premier cornerback/safety talent talent that there may never be a chance of its kind again to revitalize the most important part of Carroll’s scheme.

Yet even a high first-round draftee is merely an unknown pro. Besides, the Seahawks’ record in the first round is spotty.

Then again, Sherman is becoming an unknown pro.

David Shaw was Sherman’s offensive coordinator at Stanford under Jim Harbaugh. After Sherman’s sophomore season, when he clashed with Harbaugh, he told Shaw he wanted to leave his wide receiver position for defense. Once Harbaugh agreed, Sherman re-launched his career. When Harbaugh left for the 49ers job, Shaw succeeded him as Cardinal coach.

In an interview with ESPN in October 2014, Shaw referenced Sherman’s migration from Los Angeles’s tough Compton neighborhood and Dominguez High School to Stanford. He was an excellent student at both schools, but bridging the cultural divide was a far more difficult task.

“Whenever people don’t like what he says, or don’t like how he responds to something, I remind them what it took for him to get out of where he was to get to where he is,” said Shaw, who remains close with him. “And you can make that correlation in our football team, in the mentality it took to go from 1-11 (in 2006, Sherman’s first season) to the Orange Bowl” (a 12-1 season, including a 40-12 win over Virginia Tech).

Heady stuff. There is much evidence to conclude that he is as much a remarkable person as he is a football player. Yet . . .

Leaving Seattle means the highly unusual kid who made it from Compton to Stanford couldn’t get along with two of the best, and most opposite, coaches in the business in Harbaugh and Carroll. In a way, they both were willing to trade him.

What Sherman is mad about remains unclear. But it must truly be a big deal if it can’t be re-set by bright, successful, motivated people working together.