Washington’s Kelsey Plum Friday added the John R. Wooden Award to her cache of postseason awards, making her the most decorated athlete for a season in state history. 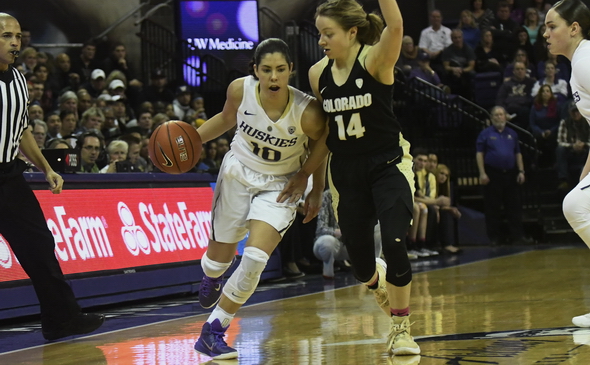 The University of Washington’s Kelsey Plum made it a sweep Friday, winning the John R. Wooden Award from the Los Angeles Athletic Club as its National Player of the Year in women’s college basketball.

The Wooden award, named in honor of the legendary UCLA coach,  is the seventh major postseason trophy claimed by Plum, who finished her tenure with the Huskies as the leading scorer in NCAA and Pac-12 history, for a single season and a career.

Plum won from a finalist group that included Kelsey Mitchell of Ohio State and A’ja Wilson of national champion South Carolina. Plum’s seven major postseason awards make her the most decorated athlete in state college history for a single season, if not for a career.

“I’m just grateful to the University of Washington,” said Plum, who accepted her award on a glitzy ESPN2 telecast that honored major men’s and women’s award winners in college basketball. “Something like this doesn’t happen without a lot of great people behind you.”

Plum’s coach throughout her four-year career, Mike Neighbors, clapped from the audience as Plum received her award. Neighbors exited the Huskies last week to become thecoach of the University of Arkansas’s women’s team in his home state.

In addition to the Wooden, Plum also won:

Associated Press Player of the Year (presented by AP, established 1995): Plum received 30 of 33 votes from a national media panel. She was the first Husky to win the award.

Ann Meyers Drysdale Trophy (National Player of Year, U.S. Basketball Writers Assn., 1988): Plum is the first UW player to win, which is named in honor of the former UCLA All-America.

Plum, who will graduate in June, is the only player in NCAA history to win every one of the awards.

Plum, the only unanimous choice on the Associated Press All-America team, finished her career with a record 3,527 points, including 1,090 during the 2016-17 season, another NCAA mark. She made 912 free throws during her career, another national record. She also set a Pac-12 single-game scoring record Feb. 25 with 57 points against Utah.

Next week, Plum will travel to New York, where she is expected to become a first-round pick in the WNBA draft.