Considered a playoff contender heading into the 2017 season, the Mariners looked anything but during opening week as they went 1-6 in seven games against the Astros and Angels. 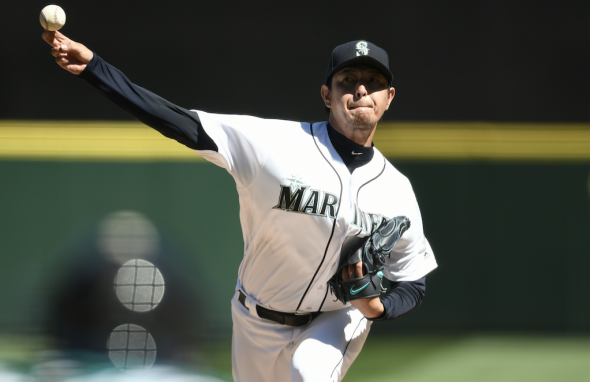 In the opening week of their 41st season, the Mariners displayed the traditional lameness that marked the vast majority of the first 40. In seven road games against the Houston Astros (4) and Los Angeles Angels (3), division rivals, Seattle won once, lost twice on walk-off hits, and flopped into last place in the AL West at 1-6, the worst mark in the majors (standings).

The Mariners seemed as if they would easily recover from a Homer Simpson-ish start to 2017 Sunday with their second win when they took a 9-3 lead over the Angels into the bottom ninth in Anahiem, that lead built in part upon Hisashi Iwakuma’s two-hit ball over six innings and Robinson Cano’s three-run homer and two-run double.

But the Mariners gagged and lost, in unfathomable fashion, 10-9 as relievers Casey Fien and Edwin Diaz had zero command of their pitches (box).

Beyond that bullpen implosion, the Mariners displayed a stupefying lack of clutch hitting during the week, going 3-for-36 (.083) with runners in scoring position during the four games in Houston and finishing the week 8-for-57 (.140), lowest mark in MLB.

During the offseason, GM Jerry Dipoto sought speed and more accomplished on-base guys at the top of the lineup, checking those boxes with the additions of SS Jean Segura and RF Mitch Haniger. Segura produced four multi-hit games in his first seven while Haniger contributed three home runs.

But the damage-doers behind them, Cano, Nelson Cruz and Kyle Seager, mostly flailed. They hit a combined 12-for-77 (.155) with one homer and six RBIs.

Segura, who came to Seattle in the trade for RHP Taijuan Walker, had a home run and hit .333/.374/.433, making him Seattle’s most productive offensive player on the road trip. Segura became the first Seattle leadoff hitter with four multi-hit contests in the first week of a season since Ichiro Suzuki posted six in 2005.

The Mariners took a 3-2 lead into the bottom of the 13th Wednesday in Houston and handed the ball to rookie Chase De Jong, who wouldn’t have pitched if Dillon Overton hadn’t been on the paternity list, awaiting the birth of his first child. Making his major league debut, De Jong got Yulieski Gurriel on a ground ball, walked Evan Gattis and induced  Josh Reddick to pop up. Then he allowed former Mariners LF Nori Aoki a wrong-field single. The killer was supplied by George Springer, a walk-off, three-run home run to left center. The Mariners dispatched De Jong back to AAA Tacoma immediately after the game.

Inning of the week (and maybe the year)

The ninth on Sunday was a calamity. The 9-3 lead was trimmed when DH Albert Pujols bashed a solo home run (592nd of his career) off Fien. Fien and closer Diaz then collaborated to walk four, allow three singles (including Pujols’ second hit of the inning) and a double for seven runs, including Cliff Pennington’s walk-off single for a preposterous comeback win (before his homer, Pujols had gone 4-for-27). According to ESPN Stats & Info, teams entering the ninth inning were 2,529-1 since 2011, the only loss coming when the Royals defeated the White Sox May 28, 2016.

“We chased some balls outside of the zone, but it’s opening day. Guys are fired up. They want to make an impact. They want to make a difference, and we got away from our game plan a little bit in that regard.” – Manager Scott Servais, after Seattle’s 3-0 loss to start the season

“I just didn’t want to walk him, but I need to make a better location down. He’s a pretty aggressive hitter. It was a strike. He just got too much wood on it.” — De Jong, after giving up a three-run, walk-off homer in the 13th inning to Springer

“It was good to get that hit. It was even better to get the win.” – Dyson, after his tiebreaking single in the ninth Thursday for the only win of the season

“It’s tough there, because he’s the one guy that we don’t want to let beat us, and I gave him a pitch to hit there. Not a good spot.” – Reliever Evan Scribner, after allowing the Trout to hit what turned out to be a two-run, game-winning homer Saturday

“We believe in ourselves. We know we have a pretty good team. We just have to stay together, keep doing what we’re doing and enjoy the games. That’s all we have to do”—Hernandez after the Mariners fell to 1-5

“When we look back on the season at the end of the year, the numbers are going to be there.” – Seager

“We had a six-run lead and that’s a pretty good spot. When you have a team down like that you have to squash them, take them down. But this one just got away from us. We’ve had some tough losses in the past, but not quite this tough.” — Servais after Sunday’s 10-9 collapse

The Mariners play their home opener at 2:10 p.m. Monday (Root Sports) to kick off a nine-game home stand that will feature visits by the Houston Astros, Texas Rangers and Miami Marlins. LHP James Paxton will throw opposite Houston RHP Charlie Morton (0-0, 3.00).