Taken with the third pick in the 2013 draft, LB/DE Dion Jordan was mostly a bust with the Miami Dolphins, who cut him March 31. The Seahawks are taking a low-risk chance on a comeback. 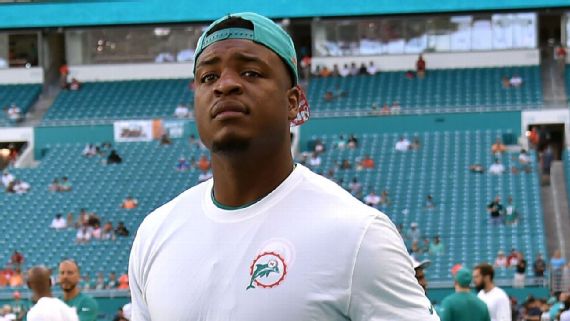 Free agent DE Dion Jordan, a three-time violator of the NFL’s substance-abuse program cut two weeks ago by the Miami Dolphins after failing a physical, was signed Tuesday by the Seahawks, according to a report in USA Today. The deal is likely a low-risk, one-year deal to see if Jordan, the No. 3 pick in the 2013 draft, can overcome his past, as well as a knee injury that forced him to sit out the 2016 season.

Jordan, 27 and 6-foot-6 and 248 pounds, is likely to be an edge rusher/linebacker in the mold of former Seahawk Bruce Irvin.

In high school in Chandler, AZ, Jordan was a tight end and a star hurdler in track who was recruited to Oregon by Chip Kelly in 2008.  He moved full-time to defense in 2010 and was a two-time All-Pac-12 selection. The Dolphins traded up from the 12th spot to select him in the 2013 draft.

His pro career, like that of another recent Seahawks free agent signee, OL Luke Joeckel, taken with the No. 2 pick in the same draft, was something of a bust. He has started just once in five years. He missed six games in 2014 and a result of two positive drug busts, then in April 2015 was suspended for a year after a third violation.

A knee injury cost him the 2016 season, but USA Today reported he passed the Seahawks’ physical. He played 26 games for the Dolphins, who saved $3.2 million by cutting him.

The Seahawks also added two other free agent linebackers, Michael Wilhoite and Terence Garvin, to compete for a spot occupied by Mike Morgan, who remains unsigned as a free agent. The position is often swapped out for a nickel defensive back, a package the Seahawks used more than 70 percent of the time last season.

Miami coach Adam Gase told reporters in December that the knee injury, which happened before training camp began, was holding back Jordan.

“His body’s not ready to go,” he said. “His game is explosion off the ball, being able to redirect, that burst that you want a guy that plays his position to have, and it’s not all the way back. That’s just what it is.”