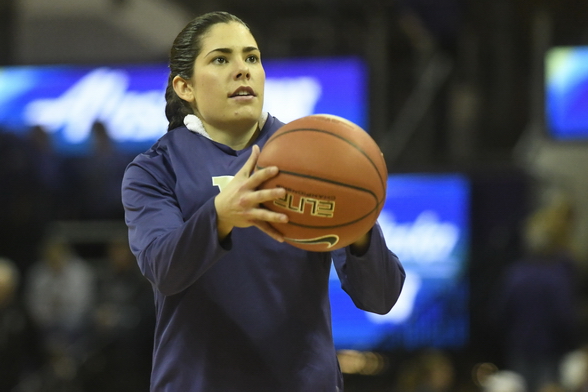 As expected, the University of Washington’s Kelsey Plum went to the San Antonio Stars with the first overall pick in the WNBA draft Thursday in New York, while former Husky teammate Chantel Osahor went 21st overall (second round) to the Chicago Sky. Due to a trade, the Seattle Storm did not have a first-round pick and had to wait until the second round (15th overall) before taking Alexis Peterson, a 5-7 guard from Syracuse.

Plum is the first UW player selected in the first round of the draft. Plum and Osahor are only the fourth and fifth ex-UW players chosen, following Rhonda Smith (2000, Sacramento, third round), Megan Franza (2001, Phoenix, fourth round) and Talia Walton (2016, Los Angeles, third round). The WNBA draft dates to 1997.

“This moment has been coming for a long time,” said Plum. “I told my mom when I was 10 years old that I wanted to play in the WNBA. So this is something I’ve dreamed about almost my entire life. You’ve got to dream big and don’t let anybody tell you any differently. Now we’ll have to see if my game translates (to the WNBA).

“I am going to be a great teammate and I’m really excited about this opportunity. I’m also kind of at a loss for words.”

“We drafted Kelsey because we feel she is the best player for us in San Antonio,” said Stars GM Ruth Riley. “Plum has re-written the history books and she’s going to make an impact for us in the WNBA.”

A native of Poway, CA., Plum recently completed one of the greatest years in NCAA women’s history. She ended it with a record 3,527 points, including a record 1,109 (31.7 average) in 2016-17. A consensus All-America pick by the Associated Press, Plum won six national player of the year awards (Associated Press, Naismith, Wade, Wooden, Honda and Drysdale). She’s a finalist for the Honda Cup, awarded to the outstanding collegiate female athlete spanning 12 sports. That will be awarded in June.

Plum will join a San Antonio team. coached by Vickie Johnson, that hasn’t had a winning record since 2012. The Stars finished 7-27 last year, worst mark in the league.

A second-team AP All-America, Osahor averaged 15.8 points per game during her senior year and led the NCAA in rebounding at 15.3 as Washington became the first school in women’s history to feature players who led the country in scoring and rebounding in the same year.

Osahor was projected as a first-round pick in some mock drafts, but there were concerns about her stamina, which troubled her at Washington.

“She has a ridiculously high basketball IQ,” said ESPN analyst Rebecca Lobo, a new entrant into the Basketball Hall of Fame.

Plum is expected to become San Antonio’s shooting guard while Osahor, with an odd-looking but effective 3-point shot (she made 37 percent) is projected as a power forward (she played center for UW) for the Sky.

The Storm had the No. 1 overall pick in the past two drafts and used those choices on guard Jewell Lloyd in 2015 and forward Breanna Stewart last year. This year, the Storm traded its No. 1, sixth overall, to the Washington Mystics in exchange for 6-6 center Carolyn Swords and the 15th pick.

Peterson, the ACC Player of the Year, averaged 23.4 points per game. She led Syracuse to the 2016 national championship. A native of Columbus, OH., Peterson was a finalist for the 2017 Wooden Award (won by Plum) and made the AP All-America second team. She had a 45-point game against North Carolina State, the most by a male/female in Syracuse’s Carrier Dome.

The Storm also had the sixth pick (30th overall) in the third round and selected Lanay Montgomery, a 6-5 center from West Virginia. She finished her career as West Virginia’s all-time field goal percentage leader at .596.

With Plum going first overall, and UW’s Markelle Fultz projected in many mocks to go No. 1 in the NBA draft, Washington could become the first school to feature the No. 1 overall picks in both drafts in the same year.