As the NWSL enters a fifth season with higher salaries and a new TV deal, the Seattle Reign must follow a mediocre year with fewer USWNT stars will look for a big year to keep their names at the fore of women’s soccer fans’ thoughts in the United States. 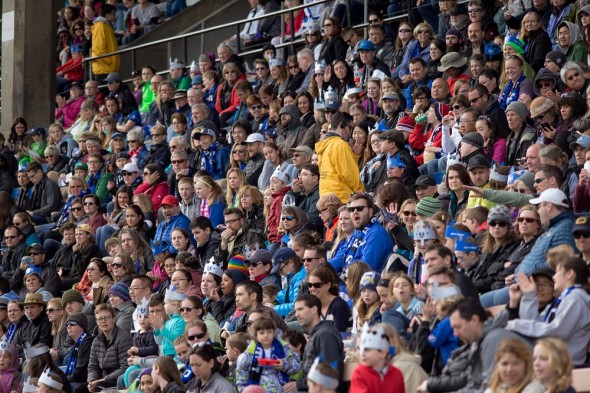 As the Seattle Reign enters its fifth season, a need for a breakout year in the National Women’s Soccer League is palpable. In 2016, the NWSL became the first women’s U.S. professional league to last four years. Entering year five, upgrades suggest it may become a long-term part of the sports landscape.

The NWSL can consider itself on the rise. A new TV deal with A&E Networks will put one game a week on Lifetime, while A&E also took on an equity stake in the league, tying it to the NWSL’s financial success.

Additionally, the league’s minimum salary was doubled to $15,000. Although still not a livable wage (particularly in the expensive markets), it’s a move in the right direction after several players and media outlets criticized the $7,200 minimum salary in 2016.

In a zeitgeist of improvement, Seattle finds itself in a precarious position as it seeks to remain one of the league’s eminent franchises.

After winning the league shield (best record in the regular season) in 2014 and 2015, then losing both NWSL Cup finals, Seattle had a downturn in 2016, an 8-6-6 record for fifth place and no playoffs.

The number of USWNT players on various teams has shifted dramatically. In its first season, the Reign had three: Hope Solo, Kristie Mewis and Megan Rapinoe played in Seattle following a league allocation process and a trade for Mewis in exchange for Amy Rodriguez.

Only Rapinoe remains, coming back from an ACL tear that left her unavailable for long stretches of last season. Canadian international Diana Matheson, acquired during the offseason from the Washington Spirit, had a season-ending knee injury in February while training with the national team.

Meanwhile, other teams in the NWSL have trended toward flashier rosters with more USWNT star power. The Portland Thorns have five national team players, while the Chicago Red Stars have four.

The Reign hopes newcomers mix with talented returnees, such as Welsh midfielder Jessica Fishlock and MLS Defender of the Year Lauren Barnes, to drive the team to the same regular-season success of 2015.

Laura Harvey, the lone female head coach in the 10-team league, acknowledged the importance of a successful 2017, but said that recent league developments hadn’t changed her goals.

“I think we have to be realistic in our ambitions,” Harvey said. “The playoffs are our first aim, the shield is the second, and the cup is the third. We haven’t changed that since year one.

“In this structure, we want to win the right way, but we want to try and make sure that we put the club on the map. The only way we do that is with success. We do have a point to prove from last year. There’s no denying that players were lost. It’s a big deal that we’ve lost them. But it’s our responsibility to make sure that that void is filled very quickly.”

Goalkeeper Haley Kopmeyer will be looked to to replace one of those big losses, as 37-year-old Hope Solo is unlikely to rejoin the Reign this season. Kopmeyer, a four-year backup who was drafted for the league’s inaugural 2013 season when the minimum salary was $6,000 said the influx of money to players was a much-needed boost.

“I was on the original minimum salary and I know how hard it is,” Kopmeyer said Tuesday. “For me, it’s amazing that they’re giving players an amount of money where, if you don’t want to coach or do extra, you absolutely can live off that.

“It’s still not overwhelming, you’re not saving a ton, but it’s much more livable. I’m really excited for the kids that immediately come in to have more comfort than what a lot of us had.”

Players must balance the need to focus on play while being scrutinized as standard-bearers for a new era of women’s professional soccer.

“There’s a really fine line,” she said. “We talk about being so grateful just being able to be here, and willing to do whatever it takes to grow the game. At the same time, being like, ‘I just want to wake up and go to work kicking balls or saving the ball.’ It’s finding that balance for us, as women for the future and for now.”