Another late goal injected drama into the Sounders’ 2-1 loss to Vancouver Friday, but the club’s lack of finishing over the first 89 minutes meant Fredy Montero’s brace stood up for the 2-1 triumph. 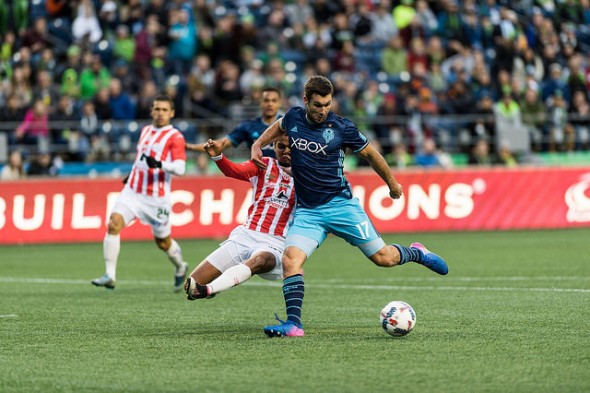 Will Bruin scored his second goal of the season, but Seattle fell 2-1 on the road to Vancouver Friday. / Jane Gershovich, Seattle Sounders FC

VANCOUVER, B.C. – If Fredy Montero wanted to quickly ingratiate himself to Vancouver Whitecaps fans, he found a perfect way. The Colombian, who scored a club-record 60 goals for the Sounders during his time with the club from 2009-2012, knocked in two with his head at B.C. Place Friday night to hand Seattle its second loss of the season, 2-1.

Montero tipped in his first header in the 65th minute following an early cross from Cristian Techera from the right alley, beating keeper Stefan Frei to the far post. Fifteen minutes later, he added another off a secondary header from a Christian Bolanos corner kick, leaving Frei wrong-footed as the ball rolled over the line.

Seattle (1-2-3, 6 points) had been attacking the Whitecaps fiercely in the early minutes of the second half after both sides had a lethargic first 45 minutes. But their shots were turned aside by diving stops from keeper David Ousted and blocks from the back line of Vancouver (2-3-1, 7 points).

“We had the ball there (at goal),” Schmetzer said. “Credit Ousted, credit their defense, credit them getting a timely goal to throw us off. At 1-0, we’re not panicking, but at 2-0, that’s a tough thing.

“We’ve got to figure out ways to not let teams off the hook when we’re dominating on some stats that don’t mean as much as the scoreline.”

Seattle took 10 corners but failed to generate any seriously threatening chances from them, With 10 minutes remaining, the Whitecaps scored their first corner kick of the night. The Sounders finished with a 62 percent advantage in possession, but had difficulty working the ball into open channels when moving into the final third.

Schmetzer subbed on forward Will Bruin in the 68th minute to try to bully a goal back into the game. Bruin, who scored in the fourth minute of stoppage time in a 2-2 draw with Montreal March 11, converted in the 90th minute off a low cross from Nicolas Lodeiro, and for a moment it looked as if the Sounders might impose their will to earn a draw in stoppage time.

Seattle threw everything it had at the net as Clint Dempsey, after a deflected header, sent a final shot toward net in the fourth minute of stoppage time. But center back Kendall Waston trapped the ball with his chest and blasted it clear just ahead of referee Kevin Stott’s final whistle.

Bruin reflected on Seattle’s failure to will in an equalizer.

“We almost did that last one,” Bruin said. “I don’t think we should be in those situations where we have to push numbers forward. If we can start out a little quicker and more aggressive than we can put ourselves in a better situation coming into the last 15 minutes.”

Six matches into a season is too early to declare any problem as a terminal, but the Sounders find themselves in need of better finishing and composure in the final third.