Reign hold on for draw in season opener

The Seattle Reign turned in a solid defensive performance against a faster Sky Blue FC, but the offense was a letdown in a 1-1 draw in Saturday’s season opener in front of 3,521 at Memorial Stadium. 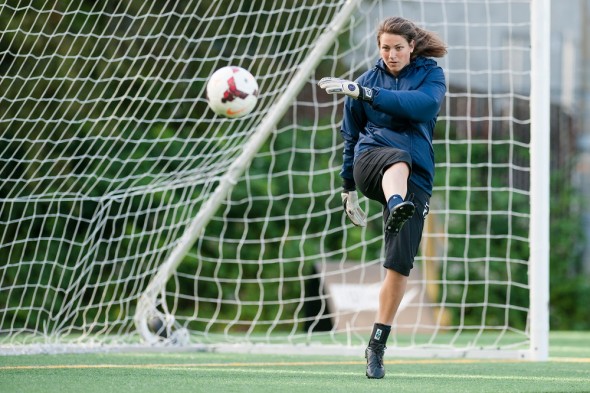 Midfielder Megan Rapinoe converted a penalty kick, but the Seattle Reign conceded a spot kick of their own as they settled for a 1-1 draw in their season opener against Sky Blue FC Saturday night at Memorial Stadium in their NWSL season opener. The shaky start was compounded by errant passes and a speed mismatch against quicker opposition.

Reign coach Laura Harvey found the result an acceptable start, given the short five-week preseason that NWSL teams are afforded.

“The positive for us is that we didn’t lose the game,” Harvey said. “Last year, we would have lost that game. We have to have grit and determination in there; a mentality of proving the critics wrong, and tonight I think we showed that we have that.

“I think our quality can be better, but I think if we have grit, determination, a little bit of luck and a couple outstanding performances we always have an opportunity to score goals.”

Seattle edged out to a lead in the 56th minute, when Rapinoe drew a foul inside the box and converted a penalty kick to the right side of the net.

Sky Blue FC answered six minutes later, when Kelley O’Hara drew a foul from defender Merritt Mathias on the end line while trying to convert a cross on the goal line. Sky Blue’s Sarah Killion steppd up to the box and tucked the ball inside the left post past diving keeper Haley Kopmeyer.

Kopmeyer kept Seattle in the game, recording eight saves and having her outstretched hand nearly reach Killion’s penalty kick. Rookie center back Kristen McNabb had an impressive pro debut despite having her hands full with the raw speed of 23-year-old Sky Blue forward Sam Kerr and O’Hara’s finesse.

Offensively, the Reign struggled. Distribution out of the back was a constant battle to find teammates, while passes in the attacking third often had the wrong weight to create dangerous attacking opportunities.

The attacking unit also failed to maintain pressure on Sky Blue, causing more stress for the back line.

“I don’t think we deserved that result, but we’re really happy to get it because I think it shows what kind of team we are.”

Despite the sluggishness, the Reign summoned a few dangerous chances at the end of the match. A last-second ball served to the head of Merritt Mathias was turned away from goal as Seattle threw numbers forward searching for a game-winner.

The Reign have a solid defensive frame and the capability to challenge opposing back lines, but the overtures into the final third are in need of refinement, based on Saturday’s miscues.