The Mariners entered the week with a 1-6 record, but won four of six games, including a sweep of Texas, to evacuate the AL West cellar with a 5-8 record. And James Paxton was a revelation. 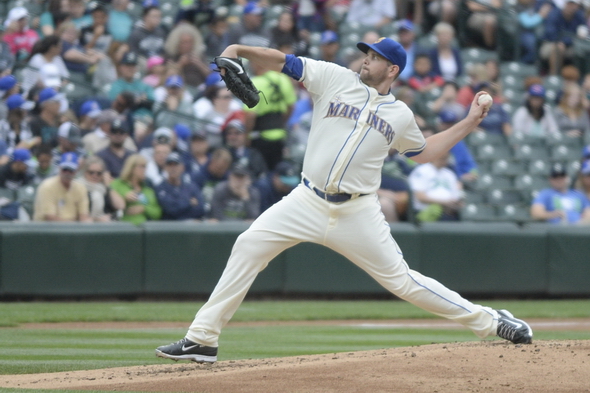 After dropping two of three to Houston to begin the week and falling to 2-8, the Mariners crawled off the stretcher and swept the Texas Rangers, finishing them off Sunday by rallying from a 6-1 deficit and winning 8-7 on Nelson Cruz’s ninth-inning, walk-off single (box). Improving to 5-8, the Mariners also exited last place in the AL West (standings). The week that was:

Felix Hernandez, who has 15 strikeouts and no walks in three starts, is officially Seattle’s ace, but James Paxton has been its best pitcher so far. In two outings last week, starting with the home opener Monday, Paxton threw 15 innings, allowed six hits, didn’t allow a run, fanned 17 and walked three. He has tossed 21 consecutive scoreless innings this season, the best start to a year by a Mariners pitcher. The previous best was by reliever Mark Lowe (17.2 innings) in 2006, and the previous best by starter was by Hernandez (17.0) in 2007.

Haniger and Motter helped offset what had been, until Sunday, another dismal week for the Mariners hitting with runners in scoring position. They went 9-for-51 (.176) through Saturday, a slight uptick over the first week when they went 8-for-57 (.140), before going 5-for-12 Sunday, including Cruz’s walk-off single.

Houston’s George Springer might win the AL West all by himself. He had a leadoff homer Tuesday (424 feet) off Seattle’s Ariel Miranda. Three of Springer’s leadoff homers have come against the Mariners. Tuesday marked the second time Springer led off with a home run against Miranda. His other leadoff jolt against Seattle came against Hernandez on opening day.

Trailing 5-0 in the seventh inning Monday, the Astros placed two runners aboard with no outs, conjuring ugly memories of Seattle’s ninth-inning meltdown in its previous game when the Angels erased a six-run deficit and won 10-9. But Paxton got Evan Gattis to foul out, struck out Marwin Gonzalez and had defensive help from Leonys Martin running down Josh Reddick’s drive to cap the outing and lift the Mariners to a 6-0 win in their first home game of 2017.

Sunday, the Mariners would have remained in last place, and fallen to 4-9, if not for Cruz’s walk-off single. Seattle entered the ninth trailing 7-6, tied it when Haniger walked with the sacks full, and won 8-7 on Cruz’s infield hit. That was Cruz’s first walk-off hit since May 15, 2015 against Boston.

Innings of the Week 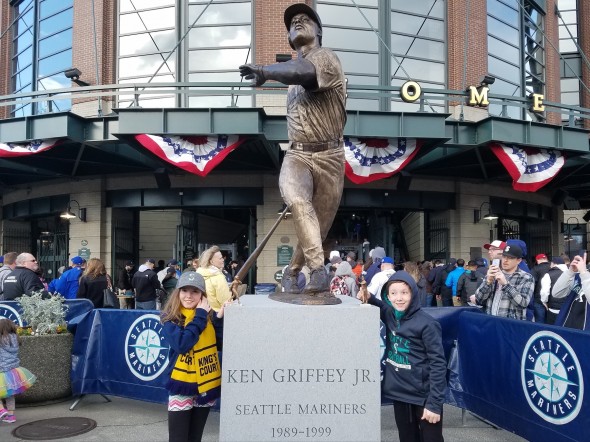 The Mariners unveiled a statue of Ken Griffey Jr. Thursday in front of the main gate at  Safeco Field. / Alan Chitlik, Sportspress Northwest

“I feel really confident in what I’m doing and focusing on the process of what I need to do out there, and so far getting the good results we need.” — Paxton Monday, after beating the Houston Astros for the second time in a week

“I think he’s gonna give the whole league a hard time if he has that kind of power and that kind of ability to land his breaking ball.” — Houston manager A.J. Hinch on Paxton

“Taylor (Motter) has been very impressive. He’s been driving the ball against some pretty good pitching and played well at shortstop, starting to settle in and be comfortable. He’s one of the bright spots, swinging the bat as good as anyone we have right now.” – Servais, after Motter homered and doubled in Seattle’s 10-5 loss to the Astros Wednesday.

“It’s something you dream about as a kid, so in that regard, it’s special. I’ve got a big league homer now — something that a lot of people aren’t able to do. I recognize that. I don’t hit a lot of homers, so it’s special for me.” – Mike Freeman, after hitting his first MLB home run Wednesday

“I like the new-look Felix. I’ll take the 7 1/3 and keeping them right there. He’s very efficient with his pitches. He got a few strikeouts tonight, but that’s not what was driving him. It was, get us back in the dugout and keep them off the board.” — Servais, after Hernandez notched his first win of 2017, a 2-1 victory over the Texas Rangers Friday

“My mechanics are real good, I’m throwing a lot of strikes. Last year, I was walking a lot of people and getting in trouble.” – Hernandez, after running to 18.1 Friday his streak of innings without a walk.

“I’m just being really aggressive. I’ve got the power stuff, and I need to be aggressive and go after guys.” – Paxton, after extending his streak of scoreless innings

The Mariners conclude the home stand starting 7:10 p.m. Monday with three against the Miami Marlins. LHP Ariel Miranda will throw for Seattle opposite RHP Tom Koehler. The Mariners begin a 10-day road trip Thursday in Oakland. Before returning to Safeco Field May 3, the Mariners will play in Detroit and Cleveland.