Thiel: Rookie does it all in Mariners’ sweep

Mitch Haniger had a three-run homer and a game-saving catch, but his biggest feat was taking a walk in the ninth inning to force in the tying run in the Mariners’ 7-6 win over Texas to complete a three-game sweep. 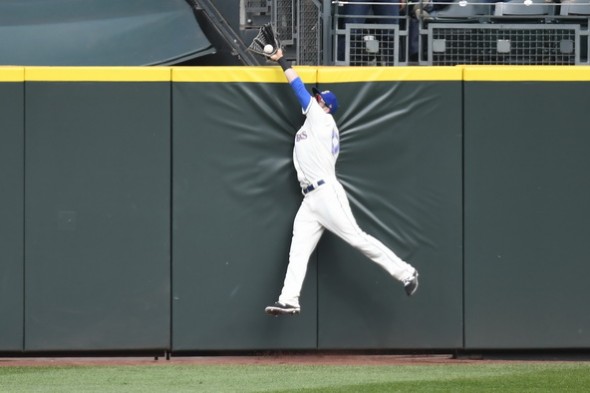 Mitch Haniger made the defensive play of the young season, taking away a home run from the Rangers’ Joey Gallo. / Alan Chitlik, Sportspress Northwest

A three-run homer as well as a game-saving catch over the right field fence would have been enough for rookie Mitch Haniger to say he had himself a day Sunday at Safeco Field. But that would ignore the premium moment of his ascendancy as a major leaguer with a big upside: The patience, in the bottom of the ninth of a tie game with the bases loaded and no outs in a 3-1 count, to take ball four.

Put-upon Rangers reliever Sam Dyson had to come in with a strike, right? Time for roundhouse swing for a walk-off grand slam, right? Time to fill ESPN SportsCenter’s top 10 all by himself, right?

“Dyson’s got a good sinker, so just try to see him (get up in the strike zone),” Haniger said quietly. “He was a little low, so I took it.”

Took it? C’mon, man. Grip it and rip it. Swing from the heels. Leave no doubt.

DH Nelson Cruz was asked what he would have done in that spot.

“I would have swung,” he said, grinning.

But Haniger ambled up the first base line with a walk that forced in the run to tie Texas at 7. After Robinson Cano’s grounder created a force-out at the plate, up stepped Cruz, who sent a sizzler up the middle that SS Elvis Andrus couldn’t handle.

Mariners 8, Rangers 7 (box), after being down 6-1 in the fourth against stud pitcher Cole Hamels, then down again 7-6 in the ninth. For a three-game sweep of the AL West nemesis. With a two-run rally in the ninth in which the Mariners did not hit a ball out of the infield.

While the manager watched from his office. Ejected, hardly dejected.

Scott Servais, thrown out the seventh inning when he was 100 percent right, saw on TV the Mariners’ best game of the infant season (go ahead insert your joke here), as well as  the full blo0m of his rookie right fielder.

General manager Jerry Dipoto said in the off-season Haniger was the key figure in the trade that sent starter Taijuan Walker and SS Ketel Marte to Arizona and brought SS Jean Segura.

“One thing I do with Jerry is trust him,” Servais said. “When he tells me what the player can contribute to our team, I’m all ears and I trust him. Mitch has been as described.”

Among the regulars, Haniger, with a 10-game hitting streak, leads the Mariners with a .294 average, four homers and 11 RBIs. As important, he understands the mantra espoused since the arrivals of Dipoto and Servais, which was on display with the walk.

Said Haniger: “That’s how you win games late. Have good at-bats, keep battling, trust the guy behind you.”

In the third inning, after starter Hisashi Iwakuma gave up six runs in a nothingburger day for him, Haniger raked Hamels for a three-run homer that went deep into the left field stands, an impressive feat in the heavy air of a cool spring.

“I would have been pretty pissed if that stayed in,” he said, smiling.

In the eighth inning with a runner on in a 6-6 tie, Rangers 3B Joey Gallo sent a deep drive to right center that reliever Marc Rzepczynski knew was a home run.

“You saw my reaction (on the swing),” Rzepczynski said. “I put my head down. I can’t say what I said. I thought, for sure it was a homer. I turned around at the right time. He caught it.

“I hugged him twice and told him I’ll take him (to have a steak) wherever he wants.”

In the ninth, Edwin Diaz gave up a solo home run to Texas’s leading hitter, Nomar Mazara, for a 7-6 lead. Besides threatening to spoil a cheap resurrection story on Easter, the feat was notable for something else: It was the only run given up over the final six innings by a denigrated bullpen that entered the game with the second-worst collective ERA in the American League (7.11).

Six relievers gave up one run on two hits and five walks and striking out four.

So did Haniger. So how is it going, Mitch?

And at 5-8 after a 2-8 start, it also might be possible for fans to un-curb their enthusiasm.

Servais’s ejection came in the seventh after first base umpire C.B. Bucknor ruled foul a chopper by Leonys Martin down the line that 1B Mike Napoli fielded and tagged the bag.  But Bucknor inexplicably changed his mind and signaled fair ball, ending the inning. Servais came out to argue the change and grew more heated as Bucknor failed to explain himself. “He called a foul ball, and then all of a sudden, without a conference with the home plate umpire, he called it a fair ball. How does one person change his mind like that? Whether it’s fair or foul, he called it foul. I thought it was wrong, how the whole situation was handled.”  . . . The ejection was Servais’s second of his managerial career, after one in June last year . . . The walk-off win, first of the season, completed a sweep of the Rangers at Safeco  by the Mariners  for the first time since 2007 . . . The comeback from five down was the biggest since June in San Diego when the Mariners came from 12-2 to win 16-13 . . . The win went to Diaz, his first in the majors . . . Guillermo Heredia, starting in left, had three hits, including a game-tying homer in the seventh . . . The Mariners start a three-game series with Miami at 7:10 p.m. Monday. Former Mariners star Ichiro is 1-for-12 as a Marlins reserve outfielder. 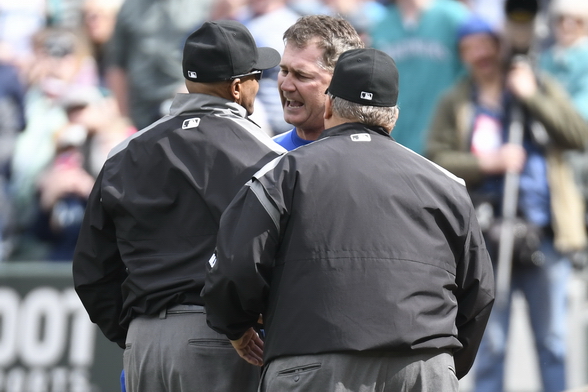