Both KeyArena plans have some public ask

Oak View Group joined Seattle Partners in asking for some public-financing help in their proposals to upgrade KeyArena, OVG wants its help after the building is open, SP seeks to save money during construction. 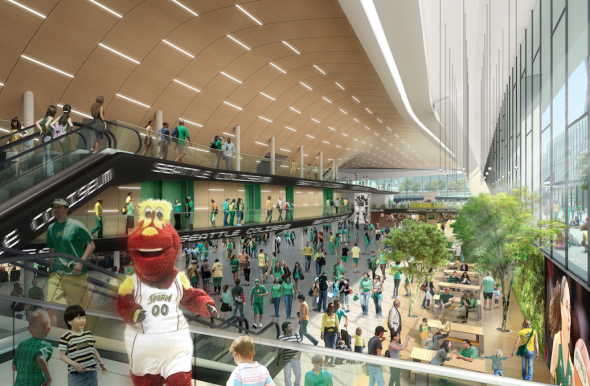 View of the interior entrance at the “Seattle Coliseum” by developers Seattle Partners.

Turns out that both bidders seeking to turn KeyArena into a premier concert/sports venue have requests for some public-funding help. But unlike Seattle Partners (AEG) that wanted public bonds to help cut costs for construction, Oak View Group seeks to have some post-opening city admissions taxes redirected to a capital fund that covers maintenance and improvements.

The competing parties made their first presentations Monday to the Seattle City Council after meeting the city’s deadline a week ago for proposals to renovate the building that could house NBA and NHL teams as soon as 2020, if all goes well. Since neither league has committed to coming to Seattle, both bidders seek to fill dates with top-end concerts.

According to a city source who saw the presentations, OVG, which put a $564 million price tag to the project, seeks to re-direct any admissions taxes above the current level from KeyArena, reasoning that the increased revenues would not otherwise exist without the improved building. The money would go back into the building’s fund to maintain it in first-class condition.

Alternatively, OVG has suggested that the tax could be waived in exchange for OVG being fully responsible for maintenance.

The admissions-tax revenue is a commonly pursued item in arena/stadium deals locally and nationally. Neither the Mariners nor the Seahawks pay a city admissions tax in their publicly funded facilities. Chris Hansen, who for five years has pursued building an arena in Sodo, has made a similar request for his plan.

The amount of money that would go to the fund was not made clear.

Spokesperson Steven Gottlieb said OVG would not publicly share information about the request and its value.

“We have provided the city with the framework for our proposed funding model and approach,” he wrote in an email. “As the process unfolds, we anticipate further discussions. But outside of our executive summary, we will rely on the city to share information with the public as it sees fit and we won’t be providing any details independent of that process.”

City attorney Ben Noble was at the meeting and confirmed, in response to a question from council member Tim Burgess, that there was an ask for funds.

“I think that’s fair, and in the context of a public arena, they think that that’s appropriate,” Noble was quoted as saying by KING5.com.

The disclosure follows news last week that Seattle Partners made a “suggestion” that the city provide $250 million in bonds in order to borrow money at a cheaper rate to fund construction. The group said the savings during construction of what they estimated to be a $520 million project would allow them to return to the city a revenue surplus estimated to be $144 million over the 35-year life of the bonds.

The suggestion, as well as OVG’s admissions-tax request, runs counter to the terms of the request for proposals, which said any public funds for the project would be “minimal.”

Seattle Partners’ suggestion is similar to the original request from Chris Hansen in 2012 for his arena in Sodo. He sought up to $200 million in bonds to save on interest-rate charges. But after his proposal was stymied in May by the council’s refusal to vacate a street for his building, his recent re-submission abandoned the request.

In the case of bidders for the Key project, the city would own the building and the land, and Oak View or Seattle Partners would be the operators. The arrangement could be a sticking point for a team’s potential owners, who generally prefer to own and/or operate their buildings to maximize revenues for the teams.

But before that, the council will have to consider whether bearing a portion of the costs is worth the benefit. The advantage the Key bidders have over Hansen’s original request is that the public assistance would go to improving a public asset at Seattle Center. Hansen is a private developer working on land he owns.

The council’s committee on the arena will meet again in May. The choice of the winning developer is scheduled to be made by June 30. It’s also possible that the city could decline both offers, opening the way for Hansen’s second try.