Four prime-time games (one fewer than a year ago), highlighted by a Monday night game Nov. 20 against NFC champion Atlanta, are part of the 2017 schedule that opens in Green Bay. 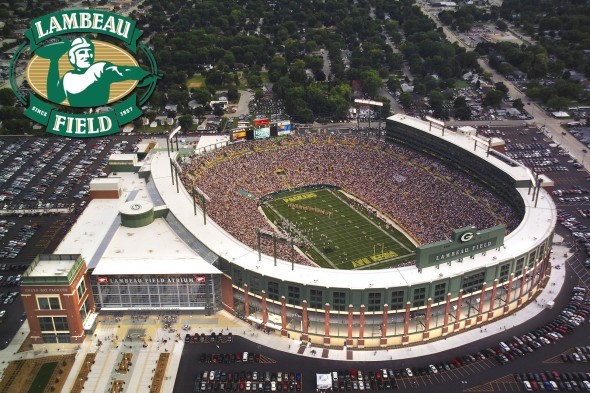 The Seahawks will open the 2017 season at Lambeau Field in Green Bay, where they are 3-10 all-time and haven’t won there since 1999. / Green Bay Packers

The 2017 NFL season doesn’t begin for another five months but, if the past is any indication, the Seahawks are already 0-1. They open Sept. 10 against Aaron Rodgers and the Green Bay Packers at their horror house, Lambeau Field, where Seattle is 3-10 all-time and has dropped seven consecutive games since 1999.

Last year, the Seahawks went to Lambeau in Week 15 and were thumped 38-10 as Russell Wilson had a career-high five interceptions. But in September, the Seahawks will trot out RB Eddie Lacy, a Packer for the past four seasons whom Seattle signed in free agency. Even with Lacy going against his former mates, Week 1 will, as history shows, be a tough slog for Seattle.

Week 2 looks a lot better. The Seahawks will play their home opener Sept. 17 against NFC West rival San Francisco, which went 2-14 last year. New head coach Kyle Shanahan might still be searching for a starting quarterback when the game kicks off.

Seattle’s 2017 slate includes four prime-time games (the Seahawks played five such contests in each of the past two seasons), most notably the Nov. 20 Monday night game at home against the Atlanta Falcons. The Seahawks edged the Falcons at the Clink 26-24 during the regular season last year, but were ousted from the divisional playoffs in Atlanta 36-20. The Falcons went on to blow a big lead and lose the Super Bowl in overtime to New England.

Based on their opponents’ 2016 records (115-138-3, .455), the Seahawks play the seventh-easiest schedule (tied with Houston). Of the 10 easiest schedules last year, seven teams made the playoffs (Patriots, Seahawks, Dolphins, Cowboys, Lions, Falcons, Giants), another finished with a winning record (the 9-7 Tennessee Titans) and the Bills and Cardinals both won seven games.

The bye last year was in Week 5, and is Week 6 this fall, after which they will travel to New York to play the Giants. Seattle has won its past three at MetLife Stadium.

Based on last year’s results, the easiest part of Seattle’s 2017 schedule will occur from Weeks 12-14, when the Seahawks play San Francisco (2-14),  Jacksonville (3-13) and Philadelphia (7-9). However, the San Francisco and Jacksonville games are on the road, the latter one the season’s only 10 a.m. PT start.

The highlight game of the year at this point is when the Falcons come to CenturyLink for the Monday nighter Nov. 20. If the Seahawks can beat the Packers in the opener, they have a solid chance to go 5-0 before their bye week.

Green Bay (10-6, 1st NFC North): The Seahawks are 7-10 all-time vs. Green Bay and, more important, 3-10 at Lambeau Field, where they have dropped seven consecutive games (last Seattle win Nov. 21, 1999). During the Carroll era (since 2010), the Seahawks are 0-2 at Lambeau with the Packers averaging 32.5 points per game.v QB Aaron Rodgers is further weaponized with the addition of free agent TE Martellus Bennett (Michael’s brother) from New England. Last year, Green Bay romped 38-10 as Wilson threw a career-high five picks to go with three sacks.

San Francisco (2-14, 4th, NFC West): The Seahawks, 21-15 all-time vs. the 49ers, have a seven-game winning streak against San Francisco, which will feature two ex-Seahawks in 2017: LB Brock Coyle and OT Gary Gilliam, both departing Seattle in free agency. New head coach Kyle Shanahan lacks a premier quarterback, but the 49ers were active in free agency, notably signing WR Pierre Garcon. On the down side, the 49ers lost PK Phil Dawson to the Arizona Cardinals. The Seahawks haven’t lost to San Francisco at the Clink in the Wilson era, nor have they lost in the Bay Area since Dec. 8, 2013 (19-17).

Tennessee (9-7, 2nd AFC South): The Seahawks, 10-5 all time against Titans, will get their first look at former Oregon staar Marcus Mariota, who has thrown 45 touchdown passes in his first two seasons. The Seahawks won the last meeting, Oct. 13, 2013, at the Clink. Seattle’s last win in Tennessee was Dec. 18, 2005, when Matt Hasselbeck threw for 285 yards and three TDs and Shaun Alexander ran for 172 yards and one TD in a 28-24 victory.

Indianapolis (8-8, 3rd AFC South): The Seahawks are 4-7 all-time vs. the Colts. The clubs last met in 2013 in Indianapolis, the Colts winning 34-28 as QB Andrew Luck threw two TDs to WR T.Y. Hilton countered with TD throws to Golden Tate and Jermaine Kearse. Indianapolis was the league’s most inconsistent team last year, alternating wins and losses for 14 weeks (3 to 17). Defense was the big problem: The Colts ranked 27th vs. the pass and 25th vs. the run.

L.A. Rams (4-12, 3rd NFC West): The Seahawks are 22-15 vs. the Rams all-time, splitting the games last year. Even though the Rams are not considered playoff worthy, they always make life hellish for Wilson. Since he entered the league, the Rams have sacked him 39 times. QB Jared Goff and RB Todd Gurley should benefit considerably by the signing of All-Pro left tackle Andrew Whitworth, even though he is 35.

New York Giants (11-5, 2nd NFC East): In addition to winning Super Bowl XLVIII at MetLife Stadium following the 2013 season, the Seahawks have won both regular-season games they have played there under Carroll, 36-24 in 2011 and 23-0 midway through 2013. The last time the teams met in 2014 at CenturyLink Field, Marshawn Lynch ran for 140 yards and four TDs in a 38-17 win, extending Seattle’s winning streak over New York to three games. QB Eli Manning will have a new weapon in 2017, WR Brandon Marshall, signed in free agency.

Houston (9-7, 1st AFC South): This is the first meeting between the Seahawks and Texans since Sept. 29, 2013, when Seattle won 23-20 in overtime on Stephen Hauschka’s 45-yard field goal.  The Texans took major hits during free agency, but also got rid their major problem, QB Brock Osweiler. If Houston had a premier quarterback, it would probably be a Super Bowl contender. Even without one, the Texans-Seahawks battle figures to be a good defensive one. The Texans featured the NFL’s top-ranked defense last year – without the injured J.J. Watt – while the Seahawks had snapped at four years their streak of allowing the fewest points in the league.

Washington (8-7-1, 3rd NFC East): The Seahawks are 5-11 all-time vs. Washington, but have won the past two meetings, including 27-17 in the last one in 2014, when Wilson threw for two TDs and ran for another while accumulating 122 rushing yards. This will mark Washington’s first regular season appearance at the Clink since Nov. 27, 2011, a game the Redskins won 20-17. Washington lost two major receivers in free agency, Pierre Garcon and DeSean Jackson. They signed WR Terrelle Pryor, a former quarterback who spent 2014 training camp with the Seahawks.

Arizona (7-8-1, 2nd, NFC West): The Seahawks are 17-18-1 all-time vs. Arizona and failed to get a win last season, tying the Cardinals 6-6 on the road and losing 34-31 when Chandler Cantazaro hit a 43-yard field goal with no time left. The losses prevented Seattle from a hosting a second playoff game, leading to their elimination in the divisional round at Atlanta. Arizona made two key free-agent moves, signing LB Chandler Jones to a long-term deal and replacing Cantazaro with Phil Dawson, formerly of San Francisco. The loss of free agent DT Calais Campbell to Jacksonville will have the most significant impact.

Atlanta (11-5, 1st NFC South): The Seahawks will host the Super Bowl runner-up for the second consecutive year. Seattle won last year’s regular-season meeting 26-24 at the Clink, but lost in Atlanta 36-20 in the NFC divisional playoffs as Matt Ryan threw for 338 yards and three TDs. Seattle has dropped five of its last seven to Atlanta, which made one splash in free agency, signing former Dallas DE Jack Crawford to a three-year, $8 million deal.

Philadelphia (7-9, 4th NFC East): The Seahawks are 8-7 all-time vs. the Eagles and have won the past three meetings and six of the past seven, including 26-15 last year when Seattle rookie C.J. Prosise scored on a 72-yard run. The Eagles, who upgraded at wide receiver in free agency with the signing of Alshon Jeffery, haven’t won at the Clink since 2002.