Sounders have many questions, few defenders

A batch of injuries at the back and several poor performances up front mean Sounders are far from sure what will work when ithey face the Galaxy Sunday in Los Angeles. 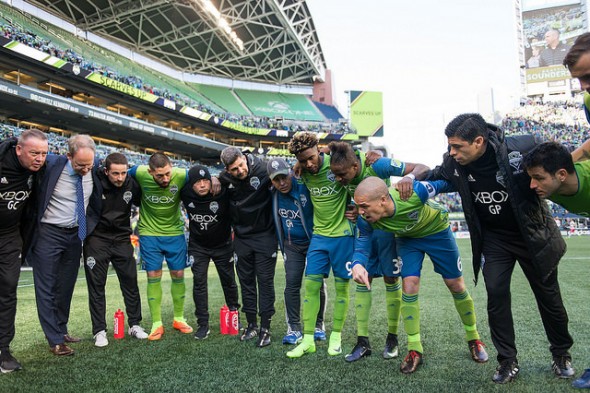 Ahead of the final leg of three road games in a row, this one against the LA Galaxy Sunday (1 p.m., ESPN), uncertainty hangs over the Seattle Sounders. In need of points after a 1-2-3 start, Seattle can’t be certain what combination of players will give it a chance at the StubHub Center in Carson, CA.

“I’m not going to make any excuses, but we’re running a little thin,” Schmetzer said. “The whole concept of a team is, ‘Next man forward.’ So Jordy (Delem) was getting some reps today, (Henry) Wingo will get some reps, Brad (Evans) is out here getting closer to his goal, so we will have options.

“But right now, right back is an issue. We’ve got a pool of center backs, but it would be nice to have a more consistent lineup.”

Evans is nearing recovery from a calf injury that has kept him off the field for 2017, while Roman Torres missed the match in Vancouver after injuring a hamstring early in a 1-1 draw in San Jose.

Center back Chad Marshall and right back Oniel Fisher were not on the field for practice Friday. Schmetzer described both as day-to-day.

Delem is a third-choice right back signed after a promising debut with S2, Seattle’s USL affiliate, last season. Wingo is a rookie Homegrown Player who played as an attacking midfielder at the University of Washington.

Even against a 2-4 LA team reeling from the loss of several high-profile players and legendary coach Bruce Arena (called in to right the sinking ship of the USMNT), a back four that includes a beaten-up Marshall, an out-of-position Gustav Svensson, and a gaping hole at right back will look a lot like Sunday brunch to Galaxy forwards Giovanni dos Santos and Gyasi Zardes.

Compounding problems at the back is Seattle’s weak attack, which has not scored a goal from open play in the first half all season. Four of its eight goals have come in the 80th minute or later.

Clint Dempsey, who hit the woodwork twice in a 2-1 loss to Vancouver and had a last-second shot cleared off the line by a defender, has been unable to establish a functional chemistry with Nicolas Lodeiro and striker Jordan Morris.

Lodeiro has struggled to find gaps between defenders to slot through-balls as he did last season, while Morris is in a scoring slump that has some calling for back-up Will Bruin, who scored two late goals as a substitute, to take over as the starter.

Lodeiro diagnosed the trouble in the final third as resulting from missed final balls.

“We were missing that last pass,” Lodeiro said Friday through an interpreter. “Clint and I get along well on the field, but that (Vancouver) game we were just missing. The ball comes through myself and through Clint, we’re just trying to improve on the field and get that last pass in the final third. It will continue to take time.”

Andrew Harvey is a co-host on Radio Cascadia Live, an hour-long program on Sports Radio 950 KJR at 9 a.m. Saturday.