Thiel: Seahawks’ Sherman talk is for the market

Richard Sherman needs a spark? While making $13 million playing for a Super Bowl contender? That’s what GM John Schneider said, apparently to help improve the market for a trade. 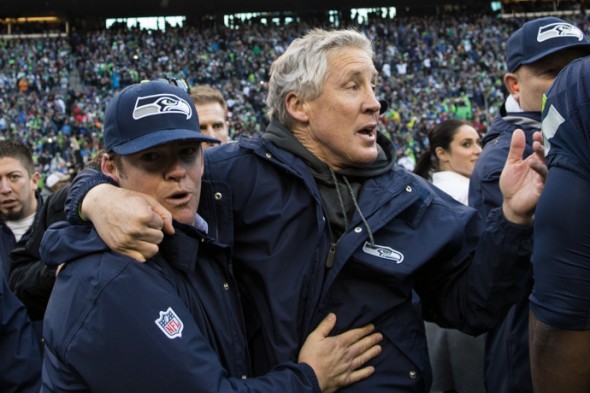 John Schneider said something peculiar the other day. He said CB Richard Sherman might need a spark.

That’s right — a guy making $13 million, widely considered among the best in his position, playing on a team that’s claimed a Super Bowl and has won playoff games five years in a row in a city that adores him, working for a coach with more tolerance for eccentricity than Dumbledore at Hogwarts, needs a spark.

Sherman should have enough spark to light all the cigarettes on Tobacco Road. But no.

Then again, who knows?

Apparently for the sake of making a market, the parties seem to be hiding their irreconcilable differences. But now it’s getting silly. To think that Sherman cannot find a spark, or that coach Pete Carroll cannot manufacture one, stretches credulity.

In an interview Thursday on ESPN 710, the Seahawks’ general manager was asked about the curious situation that has perplexed Seahawks fans and intrigued 31 other NFL teams trying to figure out a way to pry loose Sherman from a team that no one figured he would want to leave.

Since March, when Schneider and coach Pete Carroll let it be known that they are entertaining offers for Sherman after he had an unexpectedly tumultuous year, they have declined all chances to walk it back, which was the case again Thursday. But they never confirmed anything, either. These guys are smart.

Which is GM code for: Hey, NFL teams, pick up the pace. The draft starts Thursday.

It’s clear that each side knows it can only lose ground by saying bad things about the other publicly. And each side must hold out hope of reconciliation in order to keep leverage with potential trade partners.

Schneider was asked about whether Sherman, according to an ESPN report, initiated the trade idea. He answered by talking around it.

“It’s not that — it just doesn’t work that way,” he said. “The way I would answer it is that we just have this dialogue with guys all the time. And I think he’d admit that he had a rough year.

“So he’s looking for maybe a new spark, and he’s either going to find that here in Seattle, or he would find it somewhere else. But odds are he’s going to find it here.”

While anything is possible, the thought of re-igniting a good working relationship again by Seattle’s opening day, after all that has passed during the season until now, seems unlikely.

If Sherman did signal his interest in a trade, he probably asked to go to a good team, too. But the Seahawks have no obligation to accommodate that. If, however, Sherman agreed to stay mum about his reasons — a sort of non-disclosure agreement — the Seahawks might view the avoidance of bad optics as worth something.

That seemed plain by how contrived Schneider’s words sounded.

“We have a great relationship,” he said. “We have constant communication with him. I talked to him this evening. So it’s cool. Everything’s fine, and I just think that the only reason we would (trade him is) to basically create some cap room and try to become a younger football team. But that’s just one option.”

To create cap room in the past, the Seahawks let LB Bruce Irvin or OG James Carpenter go, knowing they are more readily replaceable. While no player is irreplaceable, Sherman and teammates Earl Thomas, Russell Wilson and Marshawn Lynch are close. The Seahawks can no more replicate their successful defensive strategies without Sherman than they could on offense without Lynch.

All teams must adjust to roster turnover, but the Seahawks had the NFL’s best defense for four years in a row until Thomas was hurt, as was Chancellor briefly, and Sherman began his emotional slide.

The Seahawks coaches know more than any outsider how assignment-correct Sherman was last season. They’ve never disclosed any shortcoming, but Carroll went to the trouble of a cover story, breaking news after the season that Sherman was playing with a sore knee for most of the second half.

However, because Carroll failed to include the injury on the club’s weekly injury report, the episode threatened to earn him more time in the NFL’s rules-violations jail, where he is already a repeat offender (note the missing fifth-round draft choice this week). He was acquitted by the NFL.

What was indisputable, and certainly not all Sherman’s fault, was that after Thomas’s season-ending broken leg, the defense gave up 38 points to the Packers, 34 to the Cardinals and 36 to the Falcons, all losses. The even gave up 23 to the woebegone 49ers in a win. Lots of haywires there.

How Sherman’s two sideline tantrums against his coaches played out inside the locker room wasn’t known publicly. But certainly they could be considered worthy of punishment, especially after the second episode in the Rams game where he crossed a line by chastising the offensive coordinator, Darrell Bevell, analogizing to the Play That Cannot Be Unseen.

No sanction was disclosed, nor did Sherman acknowledge publicly that he erred. The possibility looms that Carroll indulged a double standard, which can be quicksand for any coach.

If Carroll no longer can manage Sherman — in Carroll’s own words, “he didn’t come back to us” — as he could no longer manage Lynch, then the rhetoric of the last month has been posturing for market advantage.

Whoever gets Sherman, 29, will have a player still near his peak. Whatever first-round draft choice the Seahawks get for him needs to produce a cornerback that is Sherman’s near-equivalent.

Thus begins the changing of the flat tire while driving.