The Mariners cut CF Leonys Martin, hitting .111, and benched 1B Danny Valencia in favor of Dan Vogelbach, called up from Tacoma. They also sent down pitcher Chase De Jong in favor of Chris Heston. 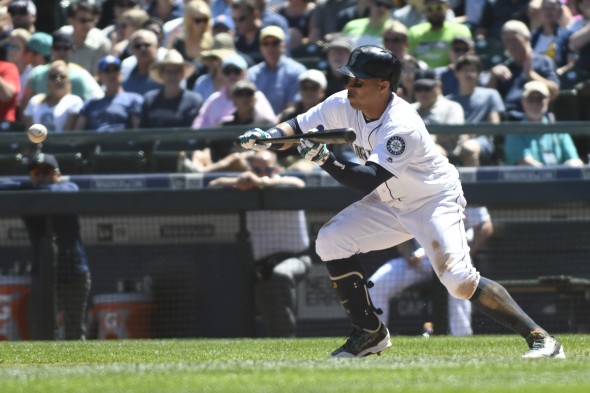 Desperation grows among the 7-12 Mariners as they made four roster moves Sunday ahead of the 1:05 p.m. game with the Athletics in Oakland. They summoned Dan Vogelbach from AAA Tacoma to play first base ahead of Danny Valencia, whose average dropped to .145 following Saturday’s third loss in a row to the A’s.

They also jettisoned starting CF Leonys Martin, who was even worse, hitting .111. He was designated for assignment. In the past two games, Jarrod Dyson had been moved into center from left field, where Guillermo Heredia has been inserted and hit 3-for-8 in two starts.

The Mariners are 1-9 on the road with a .195 batting average in those games.

The Mariners also called up RHP Chris Heston from Tacoma and sent down Chase De Jong, 23, who had four good innings in Friday’s 4-3 loss in relief of starter Ariel Miranda, who lasted three innings.

The plan in spring training was to platoon Valencia and Vogelbach at first base. But Vogelbach, acquired in July from the Cubs in the trade for RHP Mike Montgomery, did so poorly that he was sent down before the season began. Valencia became a full-time starter.

Vogelbach, 24, did better in Tacoma, hitting .309 in 16 games with a .409 on-base percentage, nine walks, 14 strikeouts, two homers and 14 RBI. But his fielding remains suspect. GM Jerry Dipoto has spoken glowingly of Vogelbach’s impressive history as a minor league hitter. But as long as Nelson Cruz is a fixture as DH, Vogelbach has to learn a position.

A year ago for Oakland, Valencia batted .287 in 130 games with 17 homers and 51 RBIs. But at times for the Mariners, he has appeared clueless at the plate.

Heston 29, was a starter in Tacoma with a 3.18 ERA in 17 innings over three starts with 19 strikeouts and a seven-inning complete game with AAA Tacoma. He spent eight seasons in the Giants organization, including 32 starts with the big club.